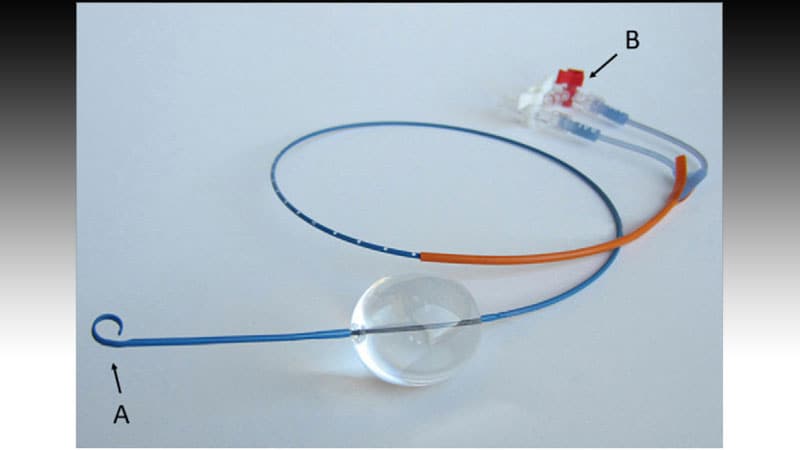 For patients with nontraumatic, out-of-hospital cardiac arrest (OHCA), evolving technology in the form of resuscitative endovascular balloon occlusion of the aorta, as well as expanded use of extracorporeal membrane oxygenation, could make a difference in survival, especially for those who might need advanced intervention but will have to travel a distance to a hospital, Amado Alejandro Baez, MD, said in a presentation at the American College of Emergency Physicians 2022 Scientific Assembly.

Current and upcoming studies suggest that ECMO has a role for managing patients with out-of-hospital cardiac arrest, said Baez, professor and vice chair of operational medicine at the Medical College of Georgia. Strategies for the use of extracorporeal cardiopulmonary resuscitation (ECPR) are gaining traction, and several studies of veno-arterial extracorporeal membrane oxygenation (VA-ECMO) comparing in-hospital ECMO and conventional CPR are in development with promising results, he noted.

An article published in the Journal of Emergency Medicine Services in 2017 described how doctors in Paris used ECMO for OHCA in patients who failed to respond to such usual first-line treatments as cardiac compressions, ventilation, defibrillation, and drug administration. The article noted that the blood flow delivered by ECMO in the out-of- hospital setting was much higher than that delivered by chest compressions or cardiac massage, Baez said.

In addition, a 2020 study published in the The Lancet showed that, in 29 patients who survived OHCA, 43% were treated with ECMO and 7% were treated with ACLS, and the cumulative survival was significantly better in the ECMO patients (hazard ratio, 0.16; P < .0001). Similarly, a study performed in Minnesota from December 2019 to April 2020, and published in eClinical Medicine, showed that out of 58 patients treated by the mobile ECMO service, 100% achieved successful cannulation, and 43% had functionally favorable survival rates at hospital discharge and at 3 months.

REBOA on the Rise

Resuscitative endovascular balloon occlusion of the aorta (REBOA) is a way to provide temporary circulatory support through the use of an endovascular balloon in the proximal or distal aorta in patients with truncal hemorrhage, according to Prytime Medical, a developer of a REBOA product.

More data are needed, but data suggest that ECPR can improve outcomes for patients with OHCA, said Baez. For those with noncompressible traumatic hemorrhage, REBOA offers some advantages when compared with resuscitative thoracotomy (RT), he said.

REBOA is less invasive, with a lower risk for blood exposure to the healthcare team via accidental puncture. In addition, REBOA allows for selective occlusion in certain areas (such as selecting zone 1 vs zone 3), Baez said. REBOA could be considered in patients who respond to infusions/transfusions, and who are suspected to have thoracic aorta injury, but not for patients who don’t meet those criteria, he said.

For those who do meet the criteria, recent data suggest that REBOA may have a significant impact on reducing mortality, he noted. In a meta-analysis published in the Journal of Surgical Research last February, mortality was significantly lower for patients treated with REBOA compared with RT, both in the emergency department setting and before discharge (relative risk 0.63 and 0.86, respectively). In-hospital mortality was significantly lower for REBOA patients vs RT patients as well (RR, 0.80; P = .009).

An earlier systematic review and meta-analysis from 2018 also showed a reduction in mortality with REBOA for patients with major bleeding. “Pooled analysis demonstrated an increase in mean systolic blood pressure by almost 50 mm Hg following REBOA use,” Baez said.

Baez cited a 2018 Consensus Statement on REBOA, which noted that emergency medicine physicians should not perform REBOA. The statement was amended in 2019 to include “a physician trained and qualified in REBOA in direct consultation with the physician who will provide definitive hemorrhage control,” he said.

In animal models, REBOA placement has been shown to improve coronary perfusion pressure and cerebral perfusion pressure, and has led to a return of spontaneous circulation, Baez noted. These animal findings suggest that REBOA “may have a role in bridging patients to more advanced interventions such as ECMO or cardiac catheterization,” he said.

In a 2019 study published in the Journal of the American Heart Association, a team of researchers in Norway conducted the first prehospital use of REBOA on nontraumatic cardiac arrest patients. They found that, among patients with OHCA, REBOA significantly boosted the increase in centralized circulation during CPR, Baez said.

Although these results are promising, the impact of REBOA during OHCA on patient outcomes requires assessment in clinical trials, he said.

More recently, in 2021, a study in the journal Injury compared several techniques for managing patients with non-compressible traumatic hemorrhage in the prehospital setting, said Baez. That study involved REBOA, external aortic compression, and abdominal aortic junctional tourniquet. Although all three techniques have shown clinical effectiveness, each has pros and cons, he noted. Although REBOA may be the most invasive compared with the other two procedures, it shows better control of aortic blood flow in prehospital settings, which has implications for patients who are farther from a hospital, he said.

Heidi Splete is a freelance medical journalist with 20 years of experience.