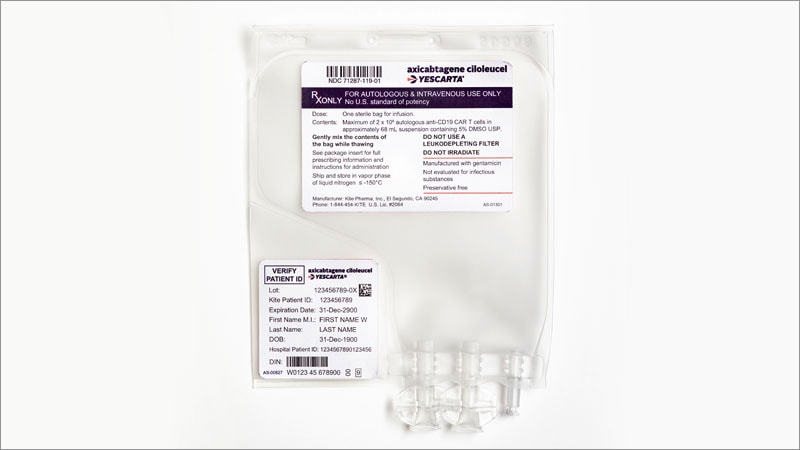 The label for axicabtagene ciloleucel (Yescarta, Kite) has been updated to include prophylactic corticosteroids to manage cytokine release syndrome (CRS).

This is a chimeric antigen receptor T-cell product indicated for use in adult patients with relapsed or refractory large B-cell lymphoma (LBCL) after two or more lines of systemic therapy.

The product label carries a black box warning that CRS is a potentially fatal complication. With the update, the new labeling advises clinicians to “consider the use of prophylactic corticosteroid in patients after weighing the potential benefits and risks…to delay the onset and decrease the duration of CRS.”

The addition of prophylactic corticosteroids to labeling was based on data from 39 patients with relapsed or refractory LBCL who received dexamethasone 10 mg orally once daily for 3 days starting prior to Yescarta infusion. In this cohort, 31 of the 39 patients (79%) developed CRS, at which point they were managed with tocilizumab and/or corticosteroids. No one developed grade 3 or higher CRS. The median time to CRS onset was 5 days and the median duration was 4 days, according to labeling.

In contrast, in another cohort of 41 patients who were started on tocilizumab and/or corticosteroids only after becoming symptomatic, the overall incidence of CRS was 93% (38/41), with a median onset at 2 days, median duration of 7 days, and two patients who developed grade 3 CRS.

Prophylactic steroids do not compromise the activity of the cell therapy, Kite said in a press release.

Yescarta is currently under review in the United States and Europe for second-line use in relapsed or refractory LBCL, Kite noted.

M. Alexander Otto is a physician assistant with a master’s degree in medical science, and an award-winning medical journalist who has worked for several major news outlets before joining Medscape. He is an MIT Knight Science Journalism fellow. Email: aotto@mdedge.com.