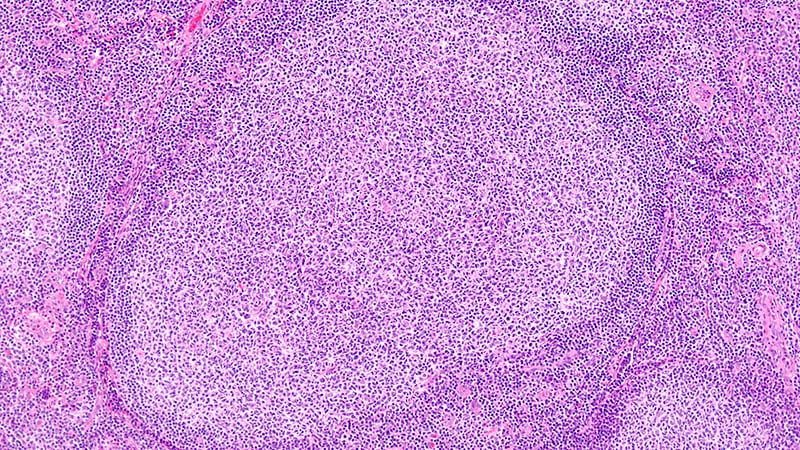 Overall, the combination therapy was associated with a 49% lower risk of progression or death compared with obinutuzumab, according to lead investigator Pier Luigi Zinzani, MD, of the Institute of Hematology at the University of Bologna, Bologna, Italy.

Given these findings and limited treatment options for patients with relapsed or refractory follicular lymphoma, this combination represents a potential new option for patients, he added.

Zinzani presented the results on June 11 at the 2022 European Hematology Association (EHA) Annual Meeting in Vienna.

To understand whether the combination was safe and effective, Zinzani and colleagues conducted a study with 217 patients who had grade 1 to 3a relapsed or refractory follicular lymphoma and who had previously been treated with two or more lines of systemic therapy, including an anti-CD20 antibody and an alkylating agent.

Patients were randomly assigned to receive either zanubrutinib plus obinutuzumab (n = 145) or obinutuzumab alone (n = 72). They were followed for a median of 12.5 months. In both arms of the study, obinutuzumab was administered on days 1, 8, and 15 of cycle 1, day 1 of cycles 2–6, and then every 8 weeks up to a maximum of 20 doses. Those who received zanubrutinib were treated with an oral dose of 160 mg twice daily until disease progression or unacceptable toxicity.

The median age of the patients was 64 years, and about half in each group were considered to be at high risk, with a high follicular lymphoma International Prognostic Index score.

The overall response rate was nearly 70% in the combination therapy group, compared with 45.8% in the obinutuzumab arm (P = .0017).

Notably, among patients treated with zanubrutinib and obinutuzumab, the median PFS rate was more than twice that of patients who received obinutuzumab alone — 27.4 months vs 11.2 months (hazard ratio, 0.51; P = .004).

A complete response was achieved in 37.2% of those in the combination group, vs 19.4% of those who received obinutuzumab alone (P = .0083). The 18-month duration of response rate was 71% with zanubrutinib and obinutuzumab, vs 54.6% with obinutuzumab.

Patients in the obinutuzumab arm who experienced disease progression or who did not respond within 12 months were allowed to cross over to the combination zanubrutinib and obinutuzumab arm. Among the 29 patients who did, the overall response rate was 24%.

Adverse events of grade 3 or higher occurred more frequently in the combination therapy group. These events included neutropenia (22.4% vs 19.7%), thrombocytopenia (14.0% vs 7%), atrial fibrillation (0.7% vs none), and major hemorrhage (1.4% vs none).

However, the incidence of treatment-emergent adverse events leading to death was lower in the combination therapy group (5.6%) than in the group that received only obinutuzumab (9.9%).

Overall, zanubrutinib plus obinutuzumab was associated with a “deep and durable response,” and there were no unexpected safety findings, Zinzani said.

The study was sponsored by BeiGene.