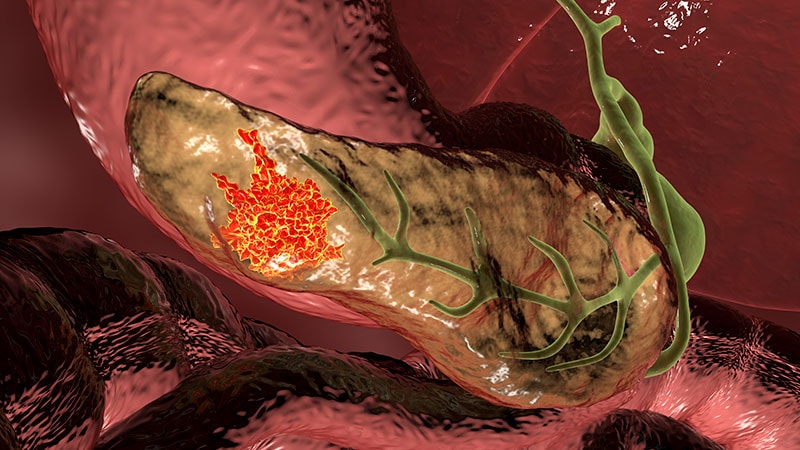 In a weighted analysis, median weighted overall survival – the primary outcome – was 14 months among 11 patients who underwent EUS-RFA, compared with 6.1 months for 35 matched controls, translating into a hazard ratio for death with EUS-RFA of 0.38 (P = .016), reported Chawin Lopimpisuth, MD, from King Chulalongkorn Memorial Hospital in Bangkok, Thailand.

Median weighted progression-free survival (PFS) was longer among cases than controls, but did not differ significantly, at 6.1 months and 3.9 months, respectively.

“In patients with unresectable pancreatic ductal adenocarcinomas that are less than 4 cm, EUS-RFA alone or combined with chemotherapy resulted in significantly improved overall survival and tended to improve progression-free survival with minimal adverse events,” Lopimpisuth reported at the annual meeting of the American College of Gastroenterology.

Endoscopically guided radiofrequency ablation of pancreatic ductal tumors has been shown to be both feasible and safe in previous studies, he said, prompting his group to explore whether EUS-RFA could help to control the primary tumor and improve survival outcomes.

They enrolled 11 patients with primary pancreatic ductal adenocarcinoma tumors less than 4 cm in diameter that were unresectable due to blood vessel involvement or distant metastasis, and used propensity-score matching to pair them with a total of 35 controls. Controls were matched by tumor size, staging, age-adjusted Charlson Comorbidity Index, chemotherapy regimen received, and interactions between CCI, regimen, and staging.

The results were weighted to assure that covariate distribution among patients treated with chemotherapy only equaled that of patients who underwent EUS-RFA.

Patients underwent EUS-RFA with a 19-gauge needle, with 50 watts of energy delivered with an impedance of 100 ohms. Those patients deemed able to tolerate chemotherapy received that as well.

After a minimum of 1 year of follow-up, the median weighted survival, as noted before, was 14 months for patients who received EUS-RFA, compared with 6.1 months for controls.

The only adverse event of significance was mild abdominal pain, reported by 8.3% of total EUS-RFA procedures.

In an interview with this news organization, ACG President Samir A. Shah, MD, from Brown University and Miriam Hospital in Providence, R.I., who was not involved in the study, commented that “we have limited options with these patients, so it’s really exciting to see an initial trend toward efficacy, and their survival improvement was significant by several months.”

Shah was a moderator of the presidential symposium where the data were presented.

Comoderator Brooks D. Cash, MD, from the University of Texas Health Science Center at Houston, said that the advantage of EUS-RFA is that it’s only minimally invasive and appears to offer a significant survival advantage for patients with few effective treatment options.

He cautioned, however, that “it’s a small study and needs to be replicated in a larger venue and different sites as well, but I think it looks very promising.”

The investigators did not report a funding source for the study. Lopimpisuth, Shah, and Cash all reported having no relevant financial relationships to disclose.