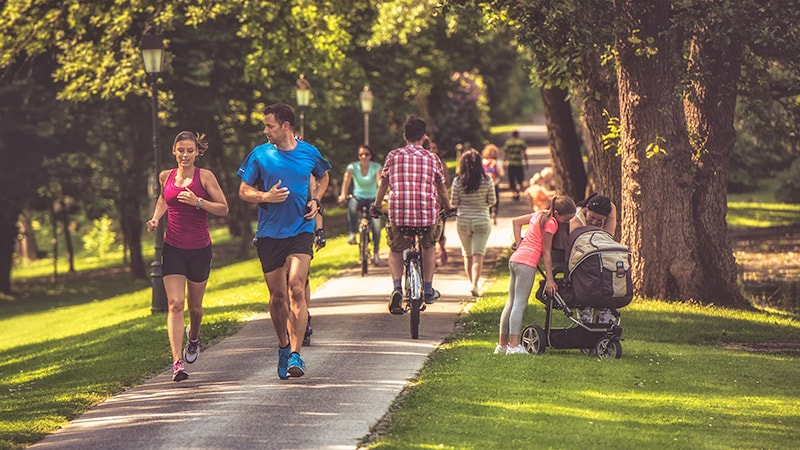 A new study suggests that going beyond current guidance on moderate and vigorous physical activity levels may add years to one’s life.

Americans are advised to do a minimum of 150 to 300 minutes a week of moderate exercise or 75 to 150 minutes a week of vigorous exercise, or an equivalent combination of both, according to US Department of Health and Human Services Physical Activity Guidelines.

Results from more than 100,000 US adults followed for 30 years showed that individuals who performed double the currently recommended range of either moderate or vigorous physical activity weekly had the lowest long-term risk of mortality.

Adults who reported completing four times the minimum recommended activity levels saw no clear incremental mortality benefit but also no harm, according to the study, published July 25 in the journal Circulation.

“I think we’re worried more about the lower end and people that are not even doing the minimum, but this should be reassuring to people who like to do a lot of exercise,” senior author Edward Giovannucci, MD, ScD, with the Harvard T.H. Chan School of Public Health, Boston, Massachusetts, told theheart.org | Medscape Cardiology.

Some studies have suggested that long-term, high-intensity exercise (eg, marathons, triathlons, and long-distance cycling) may be associated with increased risks of atrial fibrillation, coronary artery calcification, and sudden cardiac death.

A recent analysis from the Copenhagen City Heart Study also reported a U-shaped association between long-term all-cause mortality and 0 to 2.5 hours and more than 10 hours of weekly, leisure-time sports activities.

Most studies suggesting harm, however, have used only one measurement of physical activity capturing a mix of people who chronically exercise at high levels and those who do it sporadically, which possibly can be harmful, Giovannucci said. “We were better able to look at consistent long-term activity and saw there was no harm.”

The study included 116,221 participants in the Nurses’ Health Study and the Health Professionals Follow-up Study between 1988 and 2018, who completed up to 15 (median, 11) questionnaires on their health and leisure time physical activity that were updated every 2 years.

“Any Effort is Worthwhile”

The analysis found that individuals who met the guideline for long-term vigorous physical activity (75-150 min/wk) cut their adjusted risk of death from cardiovascular disease (CVD) by a whopping 31%, from non-CVD causes by 15%, and all-causes by 19%, compared with those with no long-term vigorous activity.

Higher levels did not appear to further lower mortality risk. For example, 300-374 min/week of vigorous physical activity was associated with a 32% lower risk of CVD death, 18% risk of non-CVD death, and 22% lower risk of dying from any cause.

“The sweet spot seems to be two to four times the recommended levels but for people who are sedentary, I think one of the key messages that I give my patients is that any effort is worthwhile; that any physical activity, even less than the recommended, has some mortality reduction,” Erin Michos, MD, MHS, associate director of preventive cardiology at Johns Hopkins University School of Medicine in Baltimore, Maryland, said in an interview.

“This suggests that even more is probably better, in the range of two to four times that, so maybe we should move our targets a little bit higher, which is kind of what the Department of Health and Human Services has already done,” said Michos, who was not involved in the study.

Former AHA president Donna Arnett, PhD, MSPH, who was not involved in the study, said in a statement that “we’ve known for a long time that moderate or intense levels of physical exercise can reduce a person’s risk of both atherosclerotic cardiovascular disease and mortality.”

Giovannucci noted that the joint effects of the two types of exercise on mortality have not been studied in previous studies and “there are some questions, for example, about whether doing a lot of moderate activity is sufficient or can you get more benefits by doing vigorous activity also.”

“The main message is that you can get essentially all of the benefit by just doing moderate exercise,” Giovannucci said. “There’s no magic benefit of doing vigorous [exercise]. But if someone wants to do vigorous, they can get the benefit in about half the time. So if you only have 2-3 hours a week to exercise and can do, say 2 or 3 hours of running, you can get pretty much the maximum benefit.”

“Some people think the effect of exercise is to lower your body weight or keep it down, which could be one of the benefits, but even independent of that, you get benefits even if it has no effect on your weight,” he said. “So, definitely, that’s important.”

Michos pointed out that vigorous physical activity may seem daunting for many individuals but that moderate exercise can include activities like brisk walking, ballroom dancing, active yoga, and recreational swimming.

“The nice thing is that you can really combine or substitute both and get just as similar mortality reductions with moderate physical activity, because a lot of patients may not want to do vigorous activity,” she said. “They don’t want to get on the treadmill; that’s too intimidating or stressful.”

The study was supported by the National Institutes of Health. The authors and Michos report no relevant financial relationships.