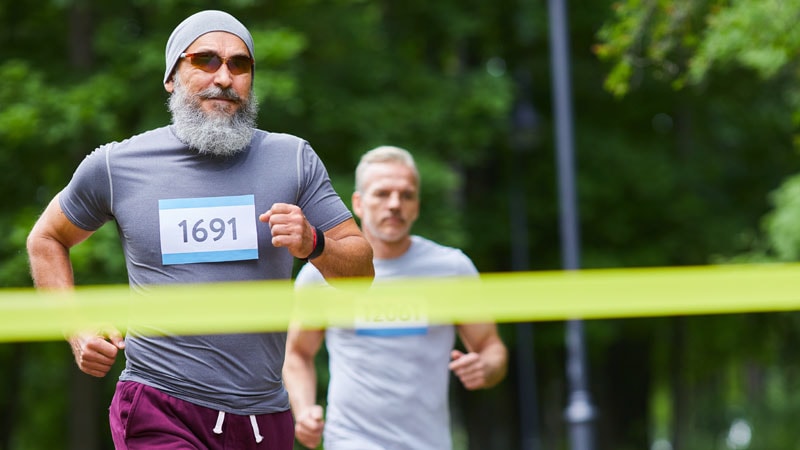 Patients who have undergone surgery to repair an aortic aneurysm related to having a bicuspid aortic valve have a low risk of future aneurysm events even if participating in endurance exercise, a new report suggests.

The report describes a case series of 21 individuals who have been participating in many endurance events for a mean of 8 years following this surgery without any aneurysm events having occurred.

“The most important message is that in this select group of patients who have had a bicuspid aortic valve related aneurysm repaired, it appears that endurance exercise is low risk,” co-author of the study, Alan Braverman, MD, Washington University School of Medicine, St Louis, Missouri, told theheart.org | Medscape Cardiology.

The case series is reported in a letter to JAMA Cardiology published online on June 8.

Braverman noted that individuals with heritable thoracic aortic aneurysm diseases are generally advised to avoid endurance exercise because of concerns about aneurysm events that could affect the whole of the aorta.

However, patients with an aneurysm related to a bicuspid aortic valve may be different because the aortic disease in these patients is much more localized and it may be the case that the problem is fixed with aneurysm repair surgery.

Braverman explained that most people have three leaflets on their aortic valve but about 1% of the population have two leaflets — they have a bicuspid valve.

“In individuals with a bicuspid valve, the jet of blood flow doesn’t go completely through the middle of the aorta but rather favors one side or the other. Over many years this can lead to degeneration of the elastic tissue in the aorta wall at one particular point, causing the aorta to become dilated and an aneurysm to form,” he said. This condition is well established, and such patients usually undergo surgical aneurysm resection, Braverman noted.

“In patients with bicuspid valve associated aortic aneurysm, it is only a small, fixed part of the ascending aorta that is affected,” he added. “Once the aneurysm is repaired, it should not happen again, and so these patients may have a low risk of future events with endurance exercise. But there is very little data on whether this is actually the case.”

For the current study, Braverman and his colleague Andrew Lai, MD, also from Washington University School of Medicine, partnered with the Ironheart Foundation, which encourages cardiac patients to have an active lifestyle, to identify individuals who had a bicuspid aortic valve and had undergone thoracic aortic aneurysm surgical repair and then later returned to endurance exercise.

They recruited 21 such individuals (mean age, 53; 80% male) who were followed for 8 years after their thoracic aortic aneurysm surgery. Clinical data, exercise regimens, endurance competitions, and imaging data were obtained from medical records, questionnaires, and telephone calls. Reports of echocardiograms, computed tomography, and magnetic resonance imaging from before surgery to the most recent follow-up were reviewed.

Most participants (76%) exercised 4 to 6 days per week, and five individuals exercised daily. Athletes exercised for a mean of 1.4 hours per day. All but one individual reported that they did not perform any intense weight training.

At last clinical follow-up, a mean of 8 years after thoracic aortic aneurysm resection, all 21 individuals were actively exercising and competing, and no adverse outcomes had been reported.

Braverman noted that clinical guidelines are currently very restrictive about exercising after any aneurysm resection.

“There have been a few anecdotal reports of professional athletes who have chosen to return to their sport after aneurysm resection surgery related to bicuspid aortic valves, but apart from that there isn’t any other data. We wanted to quantify outcomes in a larger group.”

He said they conducted the current study because a patient of his with this condition who had had his aneurysm repaired wanted to know whether he could take part in an endurance cycle ride, but they couldn’t find any information on the safety of endurance exercise in such patients in the literature.

“Our results are very reassuring and suggest a low risk of further aneurysm events in these patients even when they participate in endurance exercise,” he commented.

“In other types of genetic aneurysms such as in Marfan’s syndrome, the entire aorta is at risk, so even if one aneurysm has been repaired there is still a risk of another one developing in a different part of the aorta,” Braverman explained.

He said the information from this study will help doctors to counsel patients who have undergone bicuspid aortic valve related aneurysm surgery and who want to return to exercise.

“We have previously thought it may be safe but there were no data to support this assumption, which has led to varying advice.”

Asked if this study is enough to suggest endurance exercise is safe in these individuals, Braverman replied: “While 21 patents is not a huge amount, it is a start, and this is a lot more data than we have had before. And hopefully, our data will stimulate others to do similar studies.”

He added: “This is the largest study so far conducted on this issue. It is difficult to obtain such data as there are not many individuals who have undergone this surgery and engage in endurance exercises such as Ironman challenges.

“Exercise is critical for well-being,” he concluded. “It is reassuring and empowering for the many patients who have had bicuspid aortic valve aneurysm surgery to be able to feel confident that they can engage in endurance exercise and that this is not associated with aneurysm events.”

The authors have disclosed no relevant financial relationships.