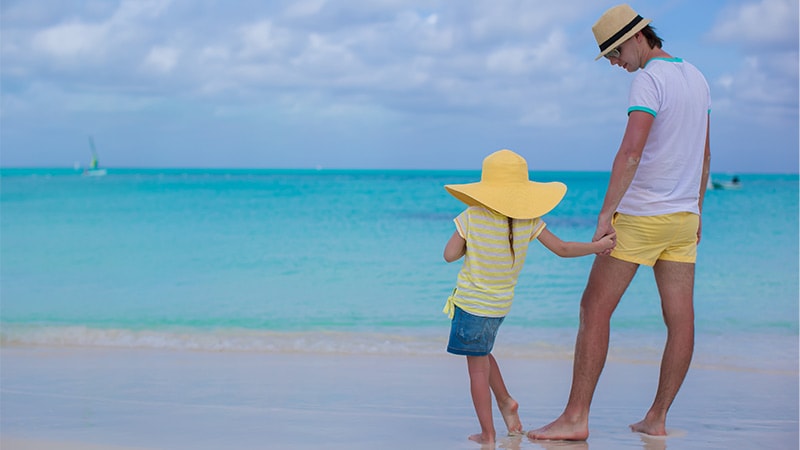 Spending time in “blue spaces” — such as beaches, rivers, and lakes — as a child can have significant and lasting benefits for wellbeing throughout life, according to a new study published in the Journal of Environmental Psychology.

When exposed to blue spaces in childhood, people are more likely to revisit bodies of water in adulthood and appreciate the time spent in natural settings.

“Learning to swim and appreciate the dangers in terms of rip currents, cold temperatures, etc., is of course primary,” Mathew White, one of the study authors and a senior scientist at the University of Vienna, told The Guardian.

“But the message we are trying to get across is that to only teach children about the dangers of water settings may make them overly afraid of, and ill-equipped to benefit from, places that can also be hugely beneficial to their health and wellbeing as they grow up,” he said. “The vast majority of blue space visits — both for adults and children — do not involve getting wet, so there are also many advantages from spending time near water, not just in it.”

Researchers from the U.S. and a dozen other countries analyzed data from the BlueHealth International Survey for more than 15,000 people across 18 countries, examining the links between childhood exposure to blue spaces and adult wellbeing.

Participants recalled their experiences up to age 16, noting how often they visited blue spaces, how local they were, and how comfortable their parents or guardians were about allowing them to swim and play. They also discussed their recent contact with blue spaces and green spaces during the previous four weeks, as well as their mental health status during the previous two weeks.

Researchers found that more childhood exposure to blue spaces was associated with better adult wellbeing. They noted the results were consistent across all countries and regions.

Adults also had familiarity with and confidence around coasts, rivers, and lakes, as well as higher levels of joy around bodies of water and a greater propensity to spend recreational time in nature during adulthood. In turn, this lifted their mood and wellbeing.

“We recognize that both green and blue spaces have a positive impact on people’s mental and physical health,” Valeria Vitale, one of the study authors and a doctoral candidate at Sapienza University of Rome, told The Guardian.

In recent years, a growing number of studies have noted the benefits of spending time in nature, including both blue spaces and green spaces such as forests, parks, and gardens. The natural settings can increase people’s physical activity levels, boost mood and wellbeing, and lower stress and anxiety.

Vitale and colleagues noted that blue spaces, in particular, have unique sensory qualities such as wave sounds and light reflections that can improve mood, as well as leisure activities such as swimming, fishing, and water sports.

“We believe our findings are particularly relevant to practitioners and policymakers because of the nationally representative nature of the samples,” she said. “First, our findings reinforce the need to protect and invest in natural spaces in order to optimize the potential benefits to subjective wellbeing. Second, our research suggests that policies and initiatives encouraging greater contact with blue spaces during childhood may support better mental health in later life.”