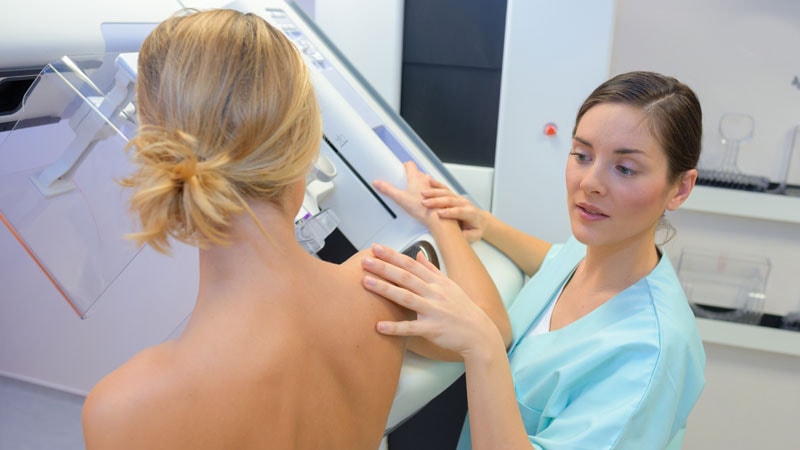 Although DBT was associated with a modest improvement in recalls for false-positive results compared with mammography, about half of women in both groups received at least one false-positive result over a 10-year period of annual screening, reported senior author Diana L. Miglioretti, PhD, from the University of California, Davis, and colleagues.

The comparative effectiveness study, published in JAMA Network Open, included 903,495 women who underwent 10 years of breast cancer screening at 126 radiology facilities in the Breast Cancer Surveillance Consortium. The mean age of participants was 57.6 years, and 46% of them had dense breasts. A total of 2,969,055 screening exams were performed (15% DBT), with each woman receiving a mean of 3.3 exams over 10 years. Most participants (71.8%) had annual exams, while 16.8% had biennial, with the remainder being performed at intervals of 3 years or more.

The authors also noted that, regardless of screening modality, all three types of false-positive results were substantially lower for biennial versus annual mammograph, and depended on age and breast density. The highest cumulative rates of false-positive results occurred in women aged 40-49 years (68.0% with annual digital mammography and 60.8% with annual DBT). Women with extremely dense breasts had the highest probability of all three types of false positive, which “may be due to the lack of interspersed fat within dense fibroglandular tissue, with the contrast between the fat and tissue being a requirement for more accurate detection of suspicious features by interpreting radiologists.”

The study findings “offer new information about the potential harms of repeated screening, which may be used to inform screening guidelines and decision-making between individuals and their physicians. However, it is important to weigh these and other potential harms with potential benefits of earlier diagnosis. … Women at high risk of an advanced cancer under biennial screening, including some women with dense breasts, may reduce their risk with annual screening,” they suggested.

Although DBT is now widely used in the United States, amid growing optimism about its superiority over digital mammography, this study reminds clinicians to counsel patients appropriately, according to Lydia E. Pace, MD, from Brigham and Women’s Hospital in Boston. “Unfortunately, the growing availability of DBT does not substantially change the likelihood that women will experience a false-positive result over years of regular mammograms,” she wrote in an invited commentary published with the study. She noted that, although many women tolerate false-positive results, “they are associated with at least transient anxiety as well as time, inconvenience, and expense. More information is needed to understand the association of DBT with overdiagnosis, which is the more clinically important harm of screening.”

The study was funded by the National Cancer Institute. Miglioretti and Pace reported no conflicts of interest. One coauthor of the study is an unpaid consultant for Grail, for the STRIVE study, and another coauthor receives personal fees from Grail for work on a data safety monitoring board. No other disclosures were reported.