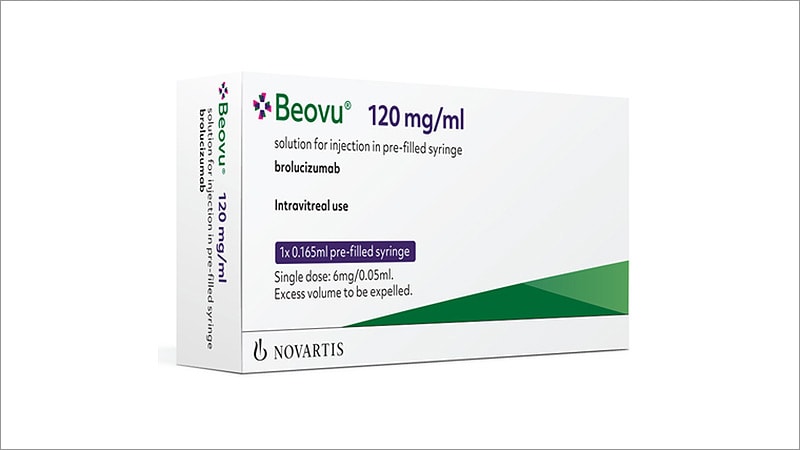 The US Food and Drug Administration (FDA) has approved brolucizumab (Beovu) for treatment of diabetic macular edema (DME), but included a warning about retinal vasculitis and retinal vascular occlusion.

“The FDA approval of Beovu in DME marks a significant milestone for US DME patients, many of whom are of working age and struggle with treatment adherence while juggling multiple doctor’s visits every month,” said Jill Hopkins, MD, global development unit head for ophthalmology at Novartis.

In the phase 3 Hawk and Harrier trials for nAMD, the drug was administered every 12 weeks in eligible patients and matched aflibercept given every 8 weeks with regard to best-corrected visual acuity. It outperformed aflibercept on measures of disease progression, as evidenced on optical coherence tomography.

Researchers followed up in September 2021 with a report of good efficacy in DME. In two phase 3 trials, called KESTREL and KITE, patients in the brolucizumab groups were initially given a loading phase of five injections 6 weeks apart. They then received injections every 12 weeks. If disease activity was observed, this interval was shortened to 8 weeks.

In KESTREL, 55.1% of these patients continued on a 12-week regimen until the last follow-up at week 52. In KITE, 50.3% continued receiving the regimen. Patients in the aflibercept groups followed the FDA recommended regimen.

(In KITE, rates of intraocular inflammation and retinal vascular occlusion were identical in the aflibercept and brolucizumab arms.)

The adverse event numbers may be enough to scare ophthalmologists and their patients away from brolucizumab, said Jayanth Sridhar, MD, associate professor of clinical ophthalmology at the Bascom Palmer Eye Institute in Miami, Florida.

“This is not an orphan disease, it’s a disease that has treatment options available. We have off-label bevacizumab, on-label ranibizumab, and on-label aflibercept, which have all been available for a decade or more,” he told Medscape Medical News. “And then you have faricimab.”

“It’s always wonderful to have more options,” said Sridhar. “Let’s say a patient can’t have steroids because of severe glaucoma and fails all four other therapies. Then maybe you do try brolucizumab as the last resort if they’re losing vision. I just think that scenario is so rare, I don’t know where its niche is in this space.”

Novartis believes brolucizumab will find a market among patients “with high unmet needs who may be considering a new treatment option, such as patients who experience the burden of frequent treatments,” a spokesperson said in an email.

“The risk of adverse events and vision loss can potentially be mitigated through taking clear steps along the patient journey, including careful selection of appropriate patients, increased vigilance in monitoring patients therapy and prompt, treatment in case of an adverse event.”

Laird Harrison writes about science, health and culture. His work has appeared in national magazines, in newspapers, on public radio and on websites. He is at work on a novel about alternate realities in physics. Harrison teaches writing at the Writers Grotto. Visit him at www.lairdharrison.com or follow him on Twitter: @LairdH.