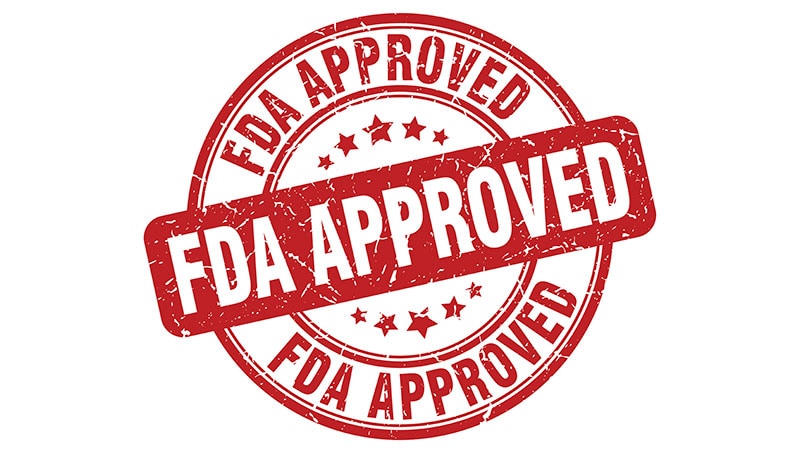 The US Food and Drug Administration (FDA) has approved pafolacianine (Cytalux) for use as an injectable imaging agent for adults with lung cancer.

The new approval, granted following priority review, marks the second indication for the imaging agent, which is used intraoperatively to illuminate tumors. The initial approval, which occurred in November 2021, was for use in adults with ovarian cancer.

Pafolacianine is “the first and only targeted molecular imaging agent that illuminates lung and ovarian cancer intraoperatively, enabling the detection of more cancer for removal,” according to the drug maker, On Target Laboratories.

“Administered by standard IV right before surgery, Cytalux binds to folate receptors that are overexpressed in most epithelial ovarian cancers and most pulmonary adenocarcinomas, the most common type of lung cancer, and illuminates intraoperatively under near-infrared light,” a company press release explained.

The FDA based its approval for this expanded indication on findings from the open-label, multicenter, phase 3 ELUCIDATE trial, which investigated pafolacianine injection in patients scheduled to undergo thoracic surgery for confirmed or suspected lung cancer.

Of 110 study participants who received the imaging agent, 24% had at least one cancerous lesion detected that was not observed by standard visual or tactile inspection.

“During the ELUCIDATE trial, Cytalux proved to be a valuable surgical tool with its ability to localize lung lesions that may have otherwise been missed” and “has potential to become standard of care in thoracic surgery,” Linda Martin, MD, MPH, chief of thoracic surgery at the University of Virginia School of Medicine, stated in the press release.

Infusion-related reactions, including nausea, vomiting, abdominal pain, flushing, dyspepsia, chest discomfort, itching, and hypersensitivity, occurred in 1%–13% of patients in the trial, with nausea and vomiting occurring most often. These reactions may be treated with antihistamines and/or anti-nausea medication, according to On Target Laboratories.

Cytalux may cause fetal harm when administered to a pregnant woman, the company stressed, adding that the use of folate, folic acid, or folate-containing supplements should be avoided within 48 hours before administering the agent.

“There is a risk of image interpretation errors with the use of Cytalux to detect lung cancer during surgery, including false negatives and false positives,” the company press release stated.

Sharon Worcester, MA, is an award-winning medical journalist based in Birmingham, Alabama, writing for Medscape, MDedge, and other affiliate sites. She currently covers oncology, but she has also written on a variety of other medical specialties and healthcare topics. She can be reached at  sworcester@mdedge.com  or on Twitter:  @SW_MedReporter