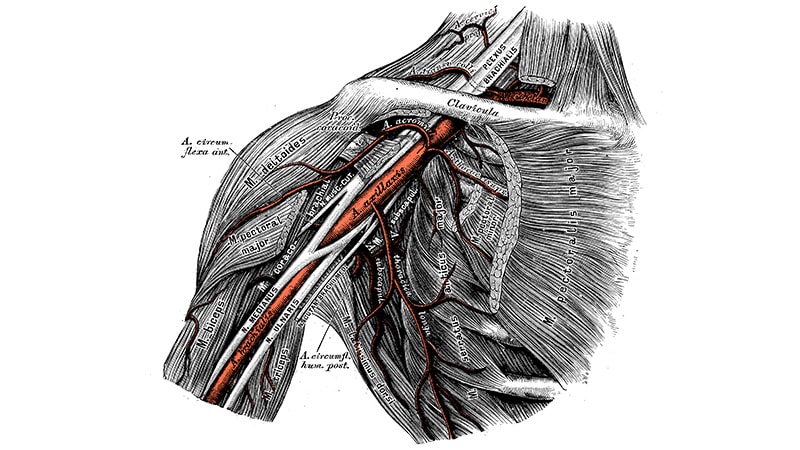 The Society for Cardiovascular Angiography and Interventions (SCAI) has issued the first statement on best practices for percutaneous axillary arterial access and training.

The position statement helps fill a gap amid increasing use of transaxillary access as an alternative to the femoral route for large-bore transcatheter aortic valve replacement (TAVR), endovascular aortic repair (EVAR), and mechanical circulatory support.

“The need for alternative access has increased as we are using more and more TAVR for our elderly population and EVAR has also increased,” writing committee chair Arnold H. Seto, MD, Long Beach VA Health Care System, Long Beach, California, said in an interview. “There’s also a set of patients who require balloon pumps for a prolonged period and people were using balloon pumps from the axillary approach, which were not custom-designed for that purpose.”

He noted that the evidence base leans heavily on case reports and case series, and that they were approached for guidance by a vendor developing a balloon pump specific to axillary access. “So that helped spur all of us to get together and decide to write up something on this topic, which was developing, but was certainly picking up steam rapidly.”

The statement was published April 19 in the Journal of the Society for Cardiovascular Angiography and Interventions, and reflects the consensus of experts in heart failure, interventional cardiology and radiology, and cardiothoracic and vascular surgery. It reviews anatomic considerations and risks for percutaneous axillary access and suggests techniques for insertion, closure, and complication management.

Although the femoral artery is the most frequent access site for percutaneous large-bore procedures, the document notes that this approach may be limited in 13%-20% of patients because of prior surgeries or severe aortoiliac and/or iliofemoral atherosclerotic disease, tortuosity, or calcification.

“Absolutely, the femoral should be the predominant access site,” Seto said. Whenever there is a compromised femoral artery, “then the axillary artery, which is rarely involved with atherosclerosis, makes for the most optimal alternative access. Other forms of alternative access, including transcaval and transcarotid, are possible but have their own issues and difficulties.”

Axillary access has traditionally been done through an open surgical approach, which allows for direct puncture, primary arterial repair, or placement of a sidearm conduit. Percutaneous transaxillary access avoids a surgical incision and general anesthesia and, theoretically, reduces the risk of infection, he said. It also allows for better mobility for patients, for example, who may have a balloon pump in place for weeks or even a month when waiting for a bridge to transplant.

The latter point was the one area of debate among the writing committee, Seto observed. “That is one of the controversies: should we make ultrasound mandatory? … Everybody agreed that it can be quite useful and was likely to be useful because of its success in every other access area,” he said. “But in the absence of randomized evidence, we couldn’t make it mandatory or a strong recommendation. We just had to make it one of several options for the operator.”

The document highlights the need for familiarity with potential axillary artery complications and their management, noting that the axillary is more fragile than the femoral artery and, thus, potentially more prone to complications during instrumentation.

Data from the ARMS study in 102 patients undergoing transaxillary access for mechanical hemodynamic support reported 17 procedural complications, including 10 minor access site bleeding events, one stroke, and one pseudoaneurysm. A small study of 25 complex EVAR procedures reported a perioperative access complication rate of 8%, including one axillary artery dissection and one stenosis.

“Despite the brachial plexus being around there, there’s actually rare reports of neurologic injury and certainly none that have been permanent,” Seto said. “Also, stroke risk is probably more related to your device size and type of device rather than the approach itself.”

A significant amount of the paper is also devoted to training and privileging suggestions with an emphasis on a multidisciplinary team. The writing group recommends graduate medical education programs develop training curricula in percutaneous axillary artery access.

Those already in practice should participate in a formal training program that focuses on axillary artery anatomy, training in large bore access and closure devices, and didactic training in imaging modalities as applied to the axillary artery. Training can occur hands-on or using online simulations.

“From a privileging standpoint, it was important for hospitals to be equally fair, regardless of the specialty that a requesting practitioner came from,” Seto said. “In other words, treat the vascular surgeons and interventional cardiologists and radiologists equally in terms of who has the privilege to do transaxillary access.”

The SCAI position statement has been endorsed by the American College of Cardiology, the Heart Failure Society of America, the Society of Interventional Radiology, and the Vascular & Endovascular Surgery Society.

Seto reported receiving honoraria from Getinge prior to initiation of the document. Disclosures for the rest of the writing group are available with the original article.