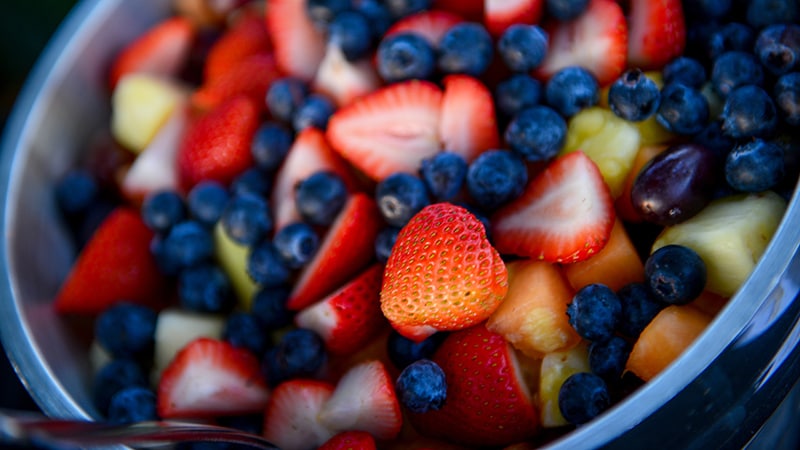 Eating at least half a serving per day of foods rich in flavonoids — like strawberries, oranges, peppers, and apples — may help lower the risk of age-related cognitive decline, new research shows.

Among the different types of flavonoids, flavones (found in some spices and yellow or orange fruits and vegetables) and anthocyanins (found in blueberries, blackberries, and cherries) seem to have most protective effect, the researchers report.

“There is mounting evidence suggesting flavonoids are powerhouses when it comes to preventing your thinking skills from declining as you get older,” study investigator Walter Willett, MD, DrPH, Harvard University, Boston, Massachusetts, said in a statement.

“Our results are exciting because they show that making simple changes to your diet could help prevent cognitive decline,” said Willett.

The study was published online July 28 in the journal Neurology.

After adjusting for age, total energy intake, major nondietary factors, and specific dietary factors, a higher intake of total flavonoids was associated with lower likelihood of self-reported SCD during follow up.

Individuals in the highest quintile of daily consumption had about a 20% lower risk of SCD relative to peers in the lowest quintile (pooled multivariable-adjusted odds ratio [OR]: 0.81; 95% CI, 0.76 – 0.89).

“The people in our study who did the best over time ate an average of at least half a serving per day of foods like orange juice, oranges, peppers, celery, grapefruits, grapefruit juice, apples, and pears,” Willett said.

“While it is possible other phytochemicals are at work here, a colorful diet rich in flavonoids — and specifically flavones and anthocyanins — seems to be a good bet for promoting long-term brain health,” he added.

A limitation of the study is that participants reported on their diets and may not recall perfectly what they ate or how much.

Reached for comment, Christopher Weber, PhD, director of global science initiatives for the Alzheimer’s Association, said this study “adds to our understanding of which elements of a healthy diet may be important in reducing dementia risk; flavonols may be one of those elements.”

“However, at this point, people should not put too much stock in specific nutrients — including subsets of flavonols — for reducing dementia risk until more research is done. Rather, they should focus on eating an overall healthy diet,” he told Medscape Medical News.

“It would be wonderful if a particular food or supplement could delay or prevent Alzheimer’s disease, but we do not have scientific evidence to support such claims. Randomized controlled clinical trials are necessary to evaluate whether any food or supplement has a scientifically proven beneficial effect,” Weber added.

For now, the Alzheimer’s Association “encourages everyone to eat a healthy and balanced diet as a way to help reduce the risk of cognitive decline,” Weber said.

“With more than 6 million Americans living with Alzheimer’s disease and other dementia today, there is a pressing need to test the effectiveness of a healthy lifestyle regimen to reduce risk of cognitive decline in a large and diverse population,” he added.

The Alzheimer’s Association has launched a 2-year clinical trial, called the US Study to Protect Brain Health Through Lifestyle Intervention to Reduce Risk (U.S. POINTER), to do just that.

“While we research that definitive lifestyle ‘recipe,’ there are things we can do today that may decrease our risk of cognitive decline as we age. Eating a heart-healthy diet, exercising regularly, and staying cognitively engaged are just a few,” Weber added.

“Scientific data on the ability of flavonoids to prevent age-related chronic diseases, including cognitive decline, has accumulated immensely over the last decade. This epidemiological study reinforces findings from smaller shorter-duration clinical trials and mechanistic studies,” said Wallace, who was not involved in the study.

“Flavonoids show great potential in reducing inflammation and oxidative stress in the body. They are also vasodilators that help improve blood flow, which is important for the cardiovascular and cerebrovascular systems,” he noted.

“Typically, foods rich in flavonoids are also nutrient-dense in vitamins, minerals, and dietary fiber (eg, fruits and vegetables). Anthocyanins in blueberries have long been known to prevent cognitive decline with age,” Wallace said.

Wallace was part of a 14-member panel of nutrition scientists who recently reviewed available evidence around fruit and vegetable intake and health.

“Our findings are consistent with this study in regard to cognitive decline and other disease states. Cruciferous vegetables, dark-green leafy vegetables, citrus fruits, and dark-colored berries seem to have superior effects on health promotion and disease prevention in general,” said Wallace.

This work was supported by grants from the National Institutes of Health. The authors have disclosed no relevant financial relationships. Weber has no relevant disclosures. Wallace is principal and chief executive officer of the Think Healthy Group; editor of the Journal of Dietary Supplements; and deputy editor-in-chief of the Journal of the American College of Nutrition.