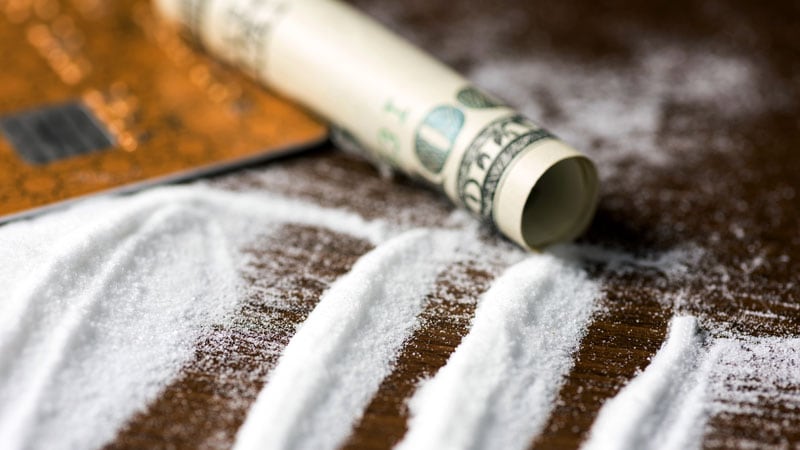 Cocaine, methamphetamine, opioids, and cannabis may independently increase risk of atrial fibrillation (AFib), based on data from almost 24 million people.

While more work is needed to uncover causal links, physicians should be aware that these commonly abused substances could be driving new cases of AFib, reported investigators from the University of California, San Francisco.

“Though alcohol and tobacco smoking have each been associated with a heightened risk of [AFib], relationships between other drug use and [AFib] are poorly understood,” they wrote in European Heart Journal.

Some previous studies have ventured into this terrain, but most focused on fatal arrhythmias, or offered anecdotal evidence. This knowledge gap is particularly concerning for cannabis, the researchers noted, as medical and recreational use are on the rise.

The present analysis included data from 23.5 million adults in California who received care through a hospital, emergency department, or outpatient surgery center during 2005-2015. Based on ICD-9 diagnostic codes, 132,834 of these patients used cannabis, 98,271 used methamphetamines, 48,701 used cocaine, and 10,032 used opiates. Inclusion required lack of AFib at baseline.

Reliance on ICD-9 codes makes the data “quite specific,” but lacking sensitivity, according to principal author Gregory M. Marcus, MD, cardiologist and professor of medicine at UCSF.

“If they were designated as using these drugs, that is very likely true,” Marcus said in an interview. “But certainly, the absence of any mention of use of these drugs does not exclude the possibility that some people were still using them. That would not create spurious false-positive relationships; if anything, it attenuates existing relationships.”

In other words, using ICD-9 codes reduced the power to detect an association between each drug and AFib, meaning any relationship needed to be sufficiently strong enough to generate a significant result.

“Our ﬁndings provide the ﬁrst evidence utilizing a longitudinal cohort to demonstrate that cannabis use predicts the future onset of AFib,” Marcus and colleagues wrote.

Dose-response relationships were not detected for any of the substances; however, usage levels were also derived from ICD-9 codes, which may have been insufficient for this purpose, according to the investigators.

Causal links between AFib and each of the drugs remain unclear. Citing prior research, Marcus and colleagues explained how methamphetamines are capable of “significant cardiac electrical remodeling,” while cocaine may cause sodium channel dysregulation, and opioids can render atrial myocytes more susceptible to oxidative damage. Although cannabis has previously been linked with hospitalization for arrhythmia, a pharmacologic driver of this phenomenon remains largely unexamined.

“We don’t know for sure precisely what the constituents are that are responsible for our findings,” Marcus said. “It’s possible that there are some effects that are much more generic, such as inhaling a burned substance. There is good evidence that if you inhale pretty much any sort of particulate matter, that increases inflammation in the body. Inflammation is known to be a trigger for atrial fibrillation.”

Alternatively, all four drugs — whether stimulants or depressants — cause “quite dramatic and often rapid effects on the autonomic nervous system,” Marcus said, noting that these rapid swings are a known trigger for AFib.

“All these drugs have slightly different mechanisms of action, so there’s not one mechanism that would explain why all of them would cause atrial fibrillation,” Olshansky said in an interview. “That does suggest that there’s something else going on, besides just the drug itself. It would be potentially concerning if we were to lay the blame totally on these drugs.”

Olshansky, who recently coauthored a review of stimulant drugs and arrhythmias, suggested that lifestyle, comorbidities, and drug impurities may have added to the risk of AF.

“[The investigators] did try to correct for that kind of stuff, but it’s very hard to correct for a lot of the issues that may be ongoing with individuals who partake in these drugs,” Olshansky said in an interview. “They may not be a healthy lot, in general.”

Still, considering previous data linking drugs of abuse with arrhythmias, he said the detected risks were “intriguing,” and deserved a closer look.

“It’s a nice groundbreaking study, with regard to the fact that they showed unique relationships that we don’t completely understand,” Olshansky said. “It opens up a new opportunity for further investigation.”