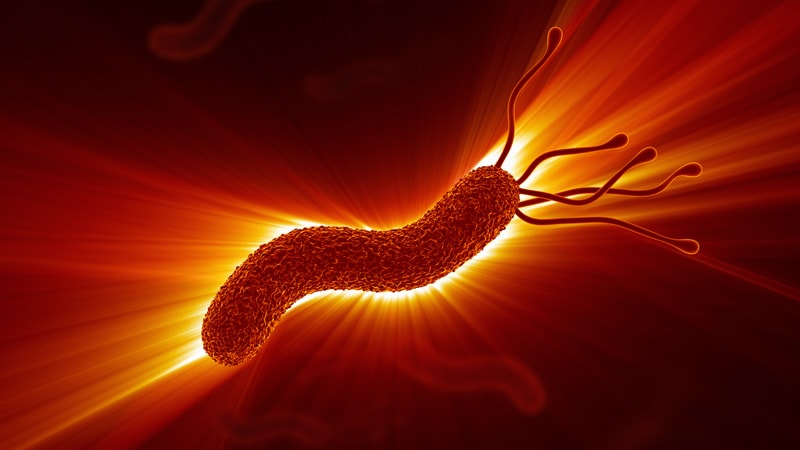 SAN DIEGO – Treatments to eradicate Helicobacter pylori (H. pylori) infections do increase the antibiotic resistance of the gut microbiota, but for only a few months, researchers reported at Digestive Disease Week® (DDW).

This provides some reassurance that increased use of antibiotics to treat these infections won’t cause long-term disruptions to the patients’ microbiomes, said Liou.

“Maybe if we have indications for antibiotic treatment, then we don’t worry about the emergence of resistance in our bodies,” he said. “But the accumulation of antibodies in the environment may induce bacteria to mutate, so maybe we still need cautious use of antibiotics.”

H. pylori infections are becoming harder to treat as more strains develop resistance to antibiotics, leading physicians to use regimens with multiple agents. This in turn has raised concerns that gut microbiota could be disrupted, with pathogens potentially developing their own resistance.

To explore these risks, Liou and colleagues recruited adults whose H. pylori infections were not successfully eradicated.

They randomly assigned 280 patients each to one of two second-line therapies, levofloxacin quadruple or bismuth quadruple. At baseline, the researchers could not find any statistically significant differences in the two groups’ demographics, cigarette and alcohol use, or ulcers, as well as antibiotic resistance in patients’ microbiome between the groups.

The researchers collected stool samples at baseline, week 2, week 8, and 1 year after eradication therapy and analyzed them for microbiota diversity and antibiotic susceptibility.

The two treatments did differ in adverse events with 48.4% for levofloxacin quadruple and 77.3% for bismuth quadruple, which was statistically significant (P < .0001).

After a year, H. pylori reinfected 2.5% of the levofloxacin group and 3% of the bismuth quadruple group.

The researchers used metagenomic sequencing to examine the bacteria in the patients’ microbiome for antibiotic resistance. Using 16S rRNA sequencing, they found that the proportion of genera and species with significant changes in abundance at 2 weeks after treatment compared with baseline was 52.4% for levofloxacin quadruple therapy versus 45.1% for bismuth quadruple therapy.

“It was generally reassuring that, even after giving these combinations of different antibiotics, eventually it doesn’t seem to affect the resistance pattern in bacteria lower down in the gut,” said session moderator Steven Moss, MD, professor of medicine at Brown University in Providence, R.I.

Still, continuing to pile on more and more antibiotics to treat H. pylori infections won’t work forever because H. pylori strains are themselves developing resistance so rapidly, he said. “We’re certainly going to have worse eradications in the future unless we can come up with new tricks.”

A hopeful development are new techniques to test H. pylori for resistance to specific antibiotics before initiating treatment, said Moss.