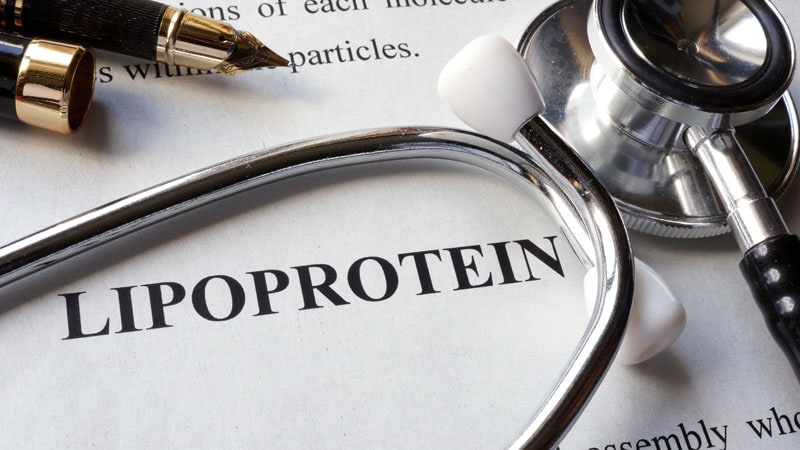 High levels of lipoprotein(a) increase the risk for incident cardiovascular disease (CVD) for hypertensive individuals but not for those without hypertension, a new MESA analysis suggests.

There are ways to test for statistical interaction, “in this case, multiplicative interaction between Lp(a) and hypertension, which suggests that Lp(a) is actually modifying the effect between blood pressure and cardiovascular disease. It’s not simply additive,” senior author Michael D. Shapiro, DO, Wake Forest University School of Medicine, Winston-Salem, North Carolina, told theheart.org | Medscape Cardiology.

“So that’s new and I don’t think anybody’s looked at that before.”

Although Lp(a) is recognized as an independent cause of atherosclerotic CVD (ASCVD), the significance of Lp(a) in hypertension has been “virtually untapped,” he noted. A recent prospective study reported that elevated CVD risk was present only in individuals with Lp(a) ≥30 mg/dL and hypertension but it included only Chinese participants with stable coronary artery disease.

The current analysis, published online this week in the journal Hypertension, included 6674 participants in the ongoing Multi-Ethnic Study of Atherosclerosis (MESA), all free of baseline ASCVD, who were recruited from six communities in the United States and had measured baseline Lp(a), blood pressure, and CVD events data over follow-up from 2000-2018.

Participants were stratified into four groups based on the presence or absence of hypertension (defined as 140/90 mm Hg or higher or the use of antihypertensive drugs) and an Lp(a) threshold of 50 mg/dL, as recommended by the American College of Cardiology/American Heart Association cholesterol guideline for consideration as an ASCVD risk-enhancing factor.

As reported online in the journal Hypertension, 809 participants had a CVD event over an average follow-up of 13.9 years including:

“What I think is interesting here is that in the absence of hypertension, we didn’t really see an increased risk despite having an elevated Lp(a),” said Shapiro. “What it may indicate is that really for Lp(a) to be associated with risk, there may already need to be some kind of arterial damage that allows the Lp(a) to have its atherogenic impact.”

“In other words, in individuals who have totally normal arterial walls, potentially, maybe that is protective enough against Lp(a) that in the absence of any other injurious factor, maybe it’s not an issue,” he said. “That’s a big hypothesis-generating [statement], but hypertension is certainly one of those risk factors that’s known to cause endothelial injury and endothelial dysfunction.”

Shapiro also pointed out that when first measured in MESA, Lp(a) was measured in 4600 participants who were not on statins, which is important because statins can increase Lp(a) levels.

“When you look just at those participants, those 4600, you actually do see a relationship between Lp(a) and cardiovascular disease,” he said. “When you look at the whole population, including the 17% who are baseline populations, even when you adjust for statin therapy, we fail to see that, at least in the long-term follow up.”

Nevertheless, he cautioned that hypertension is just one of many traditional cardiovascular risk factors that could affect the relationship between Lp(a) and CVD risk. “I don’t want to suggest that we believe there’s something specifically magical about hypertension and Lp(a). If we chose, say, diabetes or smoking or another traditional risk factor, we may or may not have seen a kind of similar results.”

When the investigators stratified the analyses by sex and race/ethnicity, they found that Lp(a) was not associated with CVD risk, regardless of hypertension status. In Black participants, however, greater CVD risk was seen when both elevated Lp(a) and hypertension were present (HR, 2.07, 95% CI, 1.34 – 3.21; P = .001).

Asked whether the results support one-time universal screening for Lp(a), which is almost exclusively genetically determined, Shapiro said he supports screening but that this was a secondary analysis and its numbers were modest. He added that median Lp(a) level is higher in African Americans than any other racial/ethnic group but the “most recent data has clarified that, per any absolute level of Lp(a), it appears to confer the same absolute risk in any racial or ethnic group.”

The authors acknowledge that differential loss to follow-up could have resulted in selection bias in the study and that there were relatively few CVD events in group 2, which may have limited the ability to detect differences in groups without hypertension, particularly in the subgroup analyses. Other limitations are the potential for residual confounding and participants may have developed hypertension during follow-up, resulting in misclassification bias.

Further research is needed to better understand the mechanistic link between Lp(a), hypertension, and CVD, Shapiro said. Further insights also should be provided by the ongoing phase 3 Lp(a) HORIZON trial evaluating the effect of Lp(a) lowering with the investigational antisense drug, pelacarsen, on cardiovascular events in 8324 patients with established CVD and elevated Lp(a). The study is expected to be completed in May 2025.

The study was supported by contracts from the National Heart, Lung, and Blood Institute and by grants from the National Center for Advanced Translational Sciences. Shapiro reports participating in scientific advisory boards with Amgen, Novartis, Novo Nordisk, and consulting for Regeneron.