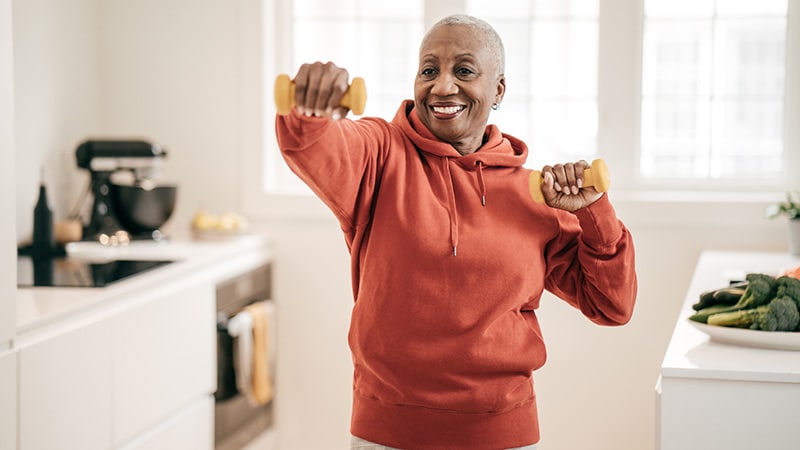 Low to moderate physical activity performed at home can reduce fatigue in cancer survivors who have completed their treatment, conclude the authors of a new meta-analysis.

Fatigue is reported by around 40% of cancer survivors, and symptoms can persist up to 10 years after cancer diagnosis, they note.

The meta-analysis included 11 studies and 1066 cancer survivors, mostly women with a history of breast cancer.

The result show that home-based physical activity improved fatigue for up to 9 months after the intervention, particularly when accompanied by frequent counseling, report Famke Huizinga, MSc, University Medical Center Groningen, Groningen, the Netherlands, and colleagues.

The research, published in the December issue of Medicine & Science in Sports & Exercise, also found that adherence to the intervention was high and that self-reported physical activity increased with time.

“We conclude that home-based physical activity interventions with frequent counseling offer a suitable and effective intervention for alleviating fatigue in survivors of cancer,” the authors write.

Approached for comment, Nigel Brockton, PhD, vice president of research at the American Institute for Cancer Research, said that the effect of physical activity on fatigue and quality of life in cancer survivors has been reported previously, and he also noted that the studies included in this meta-analysis “were all fairly small.”

Nevertheless, Brockton told Medscape Medical News that it is “encouraging” that the association was replicated in the meta-analysis and that it found a high level of compliance to the intervention. “That’s not what we’ve seen in so many other physical interventions.”

He also noted that the effect of home-based physical activity was “stronger” than that seen previously, indicating that there is a “lot of potential to improve patient outcomes.”

Brockton emphasized that the importance of interventions such as home-based physical activity is that it gives “the feeling that you have some control over your destiny after you are cut loose, if you like, by the medical system.

“Physical activity is such a fundamental behavior that it tends to have effects on other aspects of life,” he added, such as encouraging people, for example, to “eat better.”

Brockton continued that frequent counseling and monitoring “is much more feasible” via online programs, which have become more acceptable during the COVID-19 pandemic due not only to survivors becoming more at ease with such tools but also institutions becoming more open to their use.

This is because “some of the ethical barriers” have been removed, he explained.

“Prior to just about everything moving online, ethics boards were reluctant to approve projects” that involved remote engagement, he commented. This was particularly so when it came to studies in cancer survivors, where the use of medical information in telehealth was seen as problematic from a privacy standpoint, he added.

Details of the Findings

For the meta-analysis, the researchers searched the PubMed, CINAHL, PsycINFO, and Web of Science databases for studies of low- to moderate- intensity home-based physical activity in cancer survivors who had completed treatment.

Studies were included if the physical activity was not personally supervised and did not include a structured training regime, such as anaerobic training or yoga, and the control group received usual care or a nonphysical intervention.

From 1738 records initially identified, the team screened 72 publications, of which 11 studies were included in the review. Nine publications reported specifically on fatigue, with two reporting on depression or anxiety.

A majority (77%) had a history of breast cancer, while 14% had ovarian cancer, 4% colorectal cancer, 4% prostate cancer, and 1% “other” cancer, not specified. Patients were diagnosed or had completed their treatment on average 1.7–5.9 years before participating in the study.

The study was supported by the Dutch Cancer Society. The authors have disclosed no relevant financial relationships.