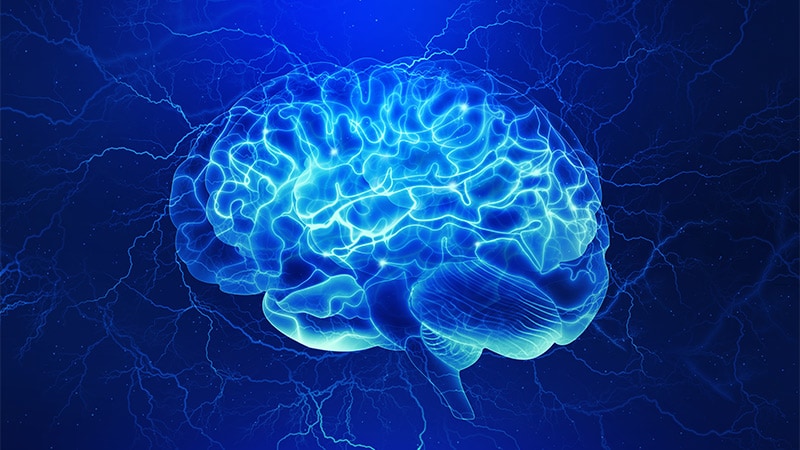 Major depressive disorder (MDD) remains a leading cause of disability and a significant predictor of suicide worldwide, Rachel D. Woodham, PhD, of the University of East London and colleagues wrote.

Transcranial direct current stimulation (tDCS) has demonstrated effectiveness as a noninvasive therapy for MDD, but requires frequent sessions, and repeat visits to treatment centers are a barrier for many patients, they noted. The tDCS procedure involves delivery of a weak direct electric current via placement of electrodes, usually with the anode over the left dorsolateral prefrontal cortex and the cathode over the right dorsolateral prefrontal cortex, suborbital, or frontotemporal region.

“The current changes neuronal membrane potential and facilitates discharge,” but “in contrast to rTMS and ECT, tDCS does not directly trigger an action potential,” the researchers wrote. The most common side effects reported with tDCS are tingling, itching, burning sensation, skin redness or headache.

The researchers proposed that tDCS could be provided at home under real-time remote supervision.

In an open-label feasibility study published in the Journal of Psychiatric Research, they recruited 26 adults with MDD in current depressive episodes of moderate to severe severity. In addition to maintaining their current treatment regimens of medication, psychotherapy, or cognitive behavioral therapy, participants used tDCS at home in 30-minute sessions, for a total of 21 sessions over 6 weeks. A researcher was present in person or on a real-time video call for each at-home session.

The primary outcome of Hamilton Rating Scale for Depression (HAMD) score improved significantly, from a mean of 19.12 at baseline to 5.33 after 6 weeks. At 3 months, the mean HAMD score was 5.65, and 78.2% of patients met the criteria for clinical remission (HAMD score less than 9). At 6 months, patients maintained this improvement, with a mean HAMD score of 5.43 and 73.9% of the participants in clinical remission. The majority of participants (24 of 26) completed the full 6-week treatment.

Clinical assessments were conducted at baseline, at the end of the 6-week treatment period, at 3 months, and at 6 months, and included not only the HAMD, but also the Hamilton Anxiety Rating Scale (HAMA), Sheehan Disability Scale (SDS), Patient Health Questionnaire–9 (PHQ-9), and Young Mania Rating Scale. All participants showed significant improvements in HAMA, SDS, and PHQ-9 scores from baseline that endured from the end of the treatment period to the 6 months’ follow-up.

All participants reported the acceptability of at-home tDCS as either “very acceptable” or “quite acceptable.”

The results were limited by the open-label feasibility design and lack of a sham control treatment; therefore, the findings of efficacy are preliminary, the researchers emphasized. “Having real-time supervision for each session likely contributed to symptom improvement.”

However, the results support the feasibility of at-home tDCS to improve outcomes both short- and long-term in patients with moderate to severe MDD, the researchers said. Larger, sham-controlled trials are needed to show efficacy, and additional assessment of feasibility should include the use of app-based devices, which may be more feasible for individuals with lower socioeconomic status.

The study received no outside funding. The study was supported by the Rosetrees Trust. The researchers had no financial conflicts to disclose.