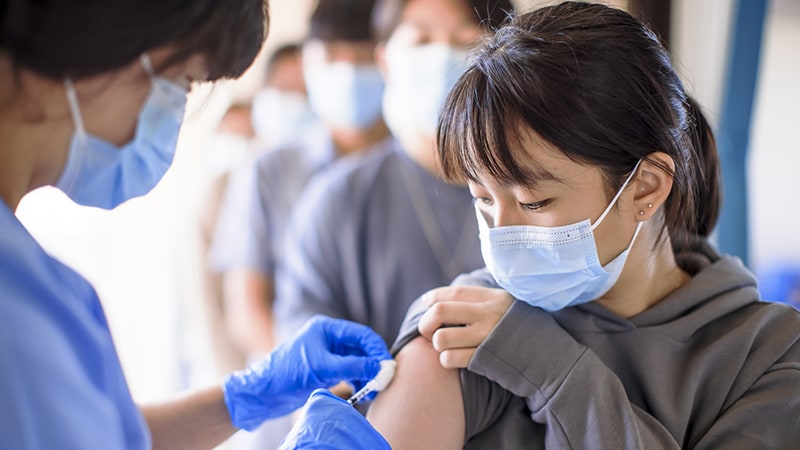 Why some COVID-19 vaccines seem occasionally to cause a distinctive form of myocarditis, and why adolescent boys and young men appear most vulnerable, remain a mystery. But the entity’s prevalence, nuances of presentation, and likely clinical course have come into sharper view after additions to the literature this week.

Two new publications all but confirm that the rare cases of myocarditis closely following vaccination against SARS-CoV-2, primarily with one of the mRNA-based vaccines from Pfizer-BioNTech and Moderna, is a clinically different creature from myocarditis physicians were likely to see before the pandemic.

A third report unveils rates of hospitalization for myocarditis linked to Pfizer-BioNTech vaccination in the 12-to-15 age group, based on active surveillance across Israel. Of note, the rates were lower than corresponding numbers among the country’s 16- to 19-year-olds published in late 2021 by the same authors.

No Link With CoronaVac

A case-control study covering almost the entire population of Hong Kong from February to August 2021 confirms a slight but significant excess risk for myocarditis and, to a lesser degree, pericarditis, after injections of the Pfizer-BioNTech vaccine. As consistently reported from other studies, the risks were highest in adolescent and young adult males and after a second dose.

The study estimated an overall carditis incidence of 5.7 cases per million doses of Pfizer-BioNTech, for a risk 3.5 times that in the unvaccinated Hong Kong population. Carditis rates after a first dose were about 2.5 per million and 10 per million after a second dose.

Hong Kong launched its public SARS-CoV-2 immunization program in late February 2021 with the Chinese-made CoronaVac (Sinovac) inactivated-virus vaccine, and introduced the mRNA-based alternative several weeks later. By August 2021, the vaccines had reached about 3.3 million people in the region — 49% of the Hong Kong population at least 12 years of age — notes the report published January 25 in Annals of Internal Medicine.

In a novel finding, there were no excesses in carditis cases after CoronaVac vaccination. The difference between vaccines likely isn’t due to chance, because three-fourths of the carditis-associated Pfizer-BioNTech injections arose within a week, whereas “71% of cases following the use of CoronaVac occurred more than 30 days after vaccination,” senior author Ian Chi Kei Wong, PhD, University of Hong Kong, Hong Kong Special Administrative Region, China, told theheart.org | Medscape Cardiology.

“This onset distribution for cases having received CoronaVac demonstrates that it is highly unlikely the carditis cases are related to the vaccine,” he said. And that “plausibly implies a specific underlying mechanism between vaccination and carditis that may only be applicable to mRNA vaccines.”

That inference is in line with case reports and other research, including large population-based studies from Israel and Denmark, although a recent study from the United Kingdom hinted at a potential excess myocarditis risk associated with the adenovirus-based AstraZeneca-Oxford vaccine.

The Hong Kong study identified 160 patients age 12 or older with a first diagnosis of carditis during February to August 2021, in electronic health records covering nearly the entire region.

“We used laboratory test results of troponin levels to further eliminate unlikely cases of carditis,” Wong said. The health records were linked to a “population-based vaccination record” maintained by the government’s department of health.

About 10 control patients from among all hospitalized patients without carditis were matched by age, sex, and admission date to each of the 160 carditis cases. About 83% of cases and 92% of the controls were unvaccinated.

In adjusted analysis, the odds ratio (OR; 95% confidence interval [CI]) for carditis among Pfizer-BioNTech vaccine recipients, compared with unvaccinated controls, was:

The case-control study is noteworthy for its design, which contrasts with the many recent case series and passive or active surveillance studies, and even the more robust population-based studies of vaccine-related myocarditis, observed Dongngan Truong, MD, University of Utah and Primary Children’s Hospital, Salt Lake City, who wasn’t part of the study.

Among its strengths, she told theheart.org | Medscape Cardiology, are its linkage of comprehensive hospital and vaccination data sets for two different vaccines; and that it corroborates other research suggesting there is “something in particular about mRNA vaccination that seems to be associated with the development of myocarditis.”

Now authors led by Dror Mevorach, MD, Hadassah Medical Center, Jerusalem, Israel, have published corresponding numbers from the same data base for myocarditis associated with the same vaccine in males and females aged 12 to 15.

Their research correspondence published online January 26 in the New England Journal of Medicine covers 404,407 in that age group who received a first dose of the mRNA-based vaccine and 326,463 who received the second dose from June to October, 2021. Only 18 cases of myocarditis were observed within 21 days of either dose.

The estimated rates for males were:

For females, the estimates were:

“The pattern observed, mainly following the second vaccination in males, suggests causality,” the group writes in a supplement published with their letter.

Another report this week adds a twist to updated numbers from the US Vaccine Adverse Event Reporting System (VAERS).

Prevalences derived from the passive-surveillance data base, known for including case records of inconsistent quality or completeness, are considered especially prone to reporting bias, the authors acknowledge.

The current analysis, however, plunges deep into VAERS-reported cases of presumed SARS-CoV-2 vaccine-associated myocarditis to help clarify “more of the characteristics of the patients and some of the treatments and short-term outcomes,” Matthew E. Oster, MD, MPH, said for theheart.org | Medscape Cardiology.

Oster, from the Centers for Disease Control and Prevention (CDC) and Emory University, Atlanta, is lead author on the study’s January 25 publication in the Journal of the American Medical Association.

The group reviewed charts and interviewed involved clinicians to adjudicate and document presentations, therapies, and the clinical course of cases reported as SARS-CoV-2 vaccine-associated myocarditis from December 2020 to August 2021. Out of the nearly 2000 reports, which were limited to patients younger than 30, the group identified 1626 likely cases of such myocarditis arising within 7 days of a second mRNA vaccine dose.

The confirmed cases consistently represented higher prevalences than expected compared with prepandemic myocarditis claims data for both sexes and across age groups spanning 12 to 29.

How Do Patients Fare Clinically?

From their chart reviews and interviews with case clinicians, Oster said, “We started to learn quickly that this is really a different type of myocarditis.”

For example, its onset, typically within a few days of the potential immunologic cause, was more rapid than in viral myocarditis, and its symptoms resolved faster, the report notes. Clinical presentations tended to be less severe, treatments not as intensive, and outcomes not as serious compared with “the kind of typical viral myocarditis that most of the providers were used to taking care of in the past,” he said. “The pattern for these cases was very consistent.”

The study covered VAERS reports of suspected myocarditis arising within a week of first dose of a mRNA-based vaccine from the United States launch of public vaccination in December 2020 to August 2021, the CDC-based group reported. By then, more than 192 million people in the country had received either the Pfizer-BioNTech (age 12 or older) or Moderna (age 18 or older) vaccines, they said.

Of the 1991 reports of myocarditis, including 391 also involving pericarditis, 1626 met the study’s definition for myocarditis on adjudication; about 82% of the latter cases were in males.

Based on the investigators’ review of charts and clinician interviews connected with 826 cases that met their definition of myocarditis in patients younger than 30, 89% reported “chest pain, pressure, or discomfort” and 30% reported dyspnea or shortness of breath. Troponin levels were elevated in 98%, 72% of patients who underwent electrocardiography showed abnormalities, and 12% of those with echocardiography had left ventricular ejection fractions less than 50%.

About 96% were hospitalized, and presenting symptoms resolved by discharge in 87% of those with available data, the group noted. Among patients with data on in-hospital therapy, they write, nonsteroidal anti-inflammatory agents were the most common therapy, in 87%.

The case-control study from Hong Kong didn’t specifically examine patients’ treatment and clinical course, but it does portray their vaccine-associated myocarditis as contrasting with more familiar viral myocarditis.

Patients with “typical” myocarditis tend to be “overall much sicker than what we’re seeing with myocarditis following vaccination,” Truong agreed when interviewed. None of the 20 patients with myocarditis after Pfizer-BioNTech vaccination in Hong Kong were admitted to the intensive care unit (ICU). That, she said, suggests none required extracorporeal membrane oxygenation or vasoactive support, often necessary in viral myocarditis. “And they had shorter hospital stays.”

In contrast, Wong noted, 14 of the study’s unvaccinated patients required ICU admission; 12 of them died during the follow-up period. None with vaccine-related carditis died during the study’s follow-up. “We also showed that cases following [Pfizer-BioNTech] vaccination were all mild and self-limiting.”

Truong largely agreed that SARS-CoV-2 vaccine myocarditis and most myocarditis seen before the pandemic can be viewed as distinct clinical entities, “at least in the short term. I think we do need to follow these patients to look at more long-term outcomes, because at this point I don’t think we know the long-term implications. But at least in the short term, it seems like these patients are different, are much less sick, and recover pretty quickly overall.”

Oster emphasized that the many and varied acute and long-term hazards from contracting COVID-19 far outweigh any risk for myocarditis from vaccination. But for individuals who were hit with myocarditis soon after their first mRNA vaccine dose, who have already established their susceptibility, he and his colleagues would recommend that they “consider alternatives and not get the vaccine again.”