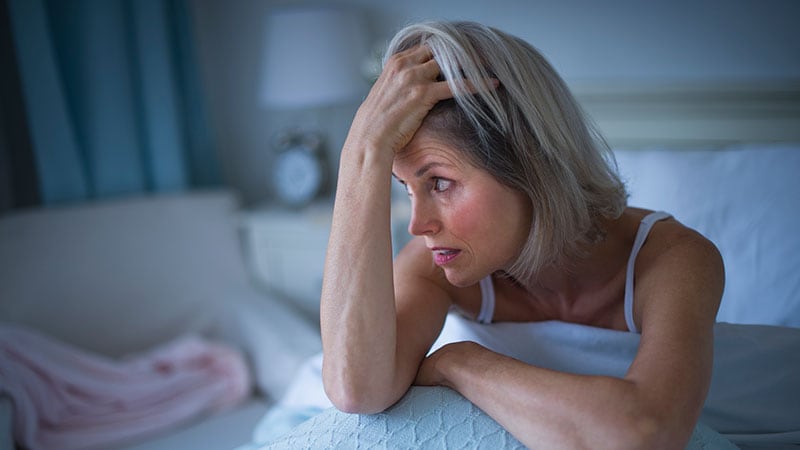 MADRID — Because of the hormone changes that occur throughout their lives, women experience sleep problems that differ significantly from those experienced by men. Indeed, 75% to 84% of pregnant women don’t sleep well during the third trimester, and up to 80% of women in menopause have symptoms that prevent them from getting a good night’s rest. For those seeking to a precision medicine approach, the challenge is to identify the relationship between the different sex-related phenotypes and the sleep conditions.

Irene Cano, MD, PhD, is the coordinator of the sleep department at the Spanish Society of Pulmonology and Thoracic Surgery (SEPAR). She spoke with Medscape Spanish Edition about the significant impact of hormones on sleep disorders in women.

“Reproductive hormones like estrogen and progesterone play a meaningful role in brain functions — not only those linked to the regulation of reproduction but also other physiological processes related to the regulation of circadian rhythms, cognitive performance, mood, and sleep. In addition, other hormones — for example, prolactin, growth hormone, cortisol, and melatonin — have sex-dependent effects on sleep,” Cano said.

Girls start puberty at a younger age than boys. As girls enter adolescence, they go to bed later and waking up earlier. So, girls are getting less than the 10 hours of sleep that they should be getting at this stage of life. The result is sleep debt, which gives rise to various problems: poor academic performance, attention-deficit/hyperactivity disorder, obesity, and metabolic problems, to name a few. As Ariadna Farré, RN, a sleep unit nurse, noted at SEPAR’s Joint Winter Meeting, “Schools would have to start morning classes later to get adolescents to perform well academically. As the situation is now, half of the kids are falling asleep at their desks.”

Cano explained the issue as follows: “In adolescence, along with changes in young women’s hormone levels, we begin to see differences between the sexes. The changes in levels of estrogens and progesterone are what’s responsible for the changes that, to some extent, cause those disturbances in the quality of our sleep and in the stages of our sleep.”

Thus, sleep can be affected by the changes in hormone level that occur during a menstrual cycle. Estrogens, which increase during the follicular phase, are associated with rapid eye movement (REM) sleep, while progesterone, which increases during the luteal phase, increases non-REM sleep. “In the 3 to 6 days prior to menstruation, it’s quite common for a woman to report difficulties falling asleep and staying asleep, in connection with a decline in the percentage of time she spends in REM sleep, in the context of premenstrual syndrome. In addition,” Cano pointed out, “menstrual bleeding, that loss of blood, is associated with a drop in iron levels, making it more likely that the woman will experience restless legs syndrome.”

Medscape Spanish Edition also spoke with Milagros Merino, MD, PhD, president of the Spanish Sleep Society. “The consequences that lack of sleep have on the cardiovascular system ― we’re essentially talking about certain arrhythmias, high blood pressure, thrombosis in some cases, stroke, and heart attack. Lack of sleep also gives rise to endocrine and metabolic issues, like overweight and being at a greater risk of developing diabetes. And as for mental health, we see, among other things, attention and memory problems, emotional lability, and irascibility. Numerous studies have confirmed all of this.”

Sleep apnea also deserves mention, Merino added. “Although this disorder is more common in men, we’re seeing it more and more now in women, along with the cardiovascular issues that it brings about.”

During pregnancy, hormone changes are much more pronounced. During the first trimester, progesterone levels increase, making the woman drowsy. On top of that, her sleep is interrupted by more frequent visits to the bathroom as well as greater general discomfort.

In the second trimester, sleep interruptions persist but are not as bad as they were during the first 3 months. In the third trimester, 75% to 84% of pregnant women find it difficult to sleep because of aches and pains, the need to urinate during the night, cramps, and heartburn.

“Major physical changes are happening. When the bladder gets compressed, the woman has to get up and go to the bathroom. There’s an interruption in her sleep,” Farré explained. In addition, as the pregnancy progresses, the woman gains weight and her body mass index (BMI) increases, which can bring on obstructive sleep apnea, high blood pressure, preeclampsia, and diabetes, if not closely monitored.

Other factors include concomitant treatments, such as contraceptives, and the stages of life, such as pregnancy and lactation. “When a woman of childbearing age has restless legs syndrome, more often than not, this means that she has an iron deficiency that needs to be treated with oral iron supplements,” said Merino. “However, there are few medications that can be given to a pregnant woman — and RLS is relatively common during pregnancy. So, we have to turn to oral or intravenous iron supplements. Yet another matter is narcolepsy. In these cases, all medications have to be stopped during pregnancy and lactation, as they can be harmful to the baby.”

While 1 in 5 menopausal women are asymptomatic, the others experience mild to severe symptoms of apnea that frequently interrupt their sleep. In this stage of life, which begins around age 50 years, the hormones that had provided protection against sleep disruptions start to decrease. As a result, there is a rise in sleep problems, especially insomnia, breathing-related sleep disorders (eg, apnea), and restless legs syndrome.

The prevalence of breathing-related sleep disorders during menopause is attributable to weight gain, the drop in levels of estrogens, and the redistribution of adipose tissue in the body. Other factors also increase a woman’s risk of experiencing apnea. They range from stress, depression, and other psychological and psychiatric conditions to health status, medication use, and simply the fact of getting older. “Sleep apnea is more common in men than in premenopausal women. The numbers even out, though, when we compare men against menopausal women,” Cano noted.

In women, symptoms of sleep apnea are frequently attributed to menopause. There is some overlap: insomnia, headache, irritability, low mood, decreased libido, fatigue during the day, and feeling sleepy. Only much later is the woman’s condition correctly diagnosed as sleep apnea. So, even though presenting with the same complaints, a man will be diagnosed with sleep apnea sooner than a woman will — in some cases, around 10 years sooner.

“On the other hand, we’d always thought that, in menopause, insomnia was characterized by awakenings occurring throughout the second half of the night. But perhaps what happens more often is that women are regularly waking up repeatedly over the course of the entire night, as opposed to experiencing a wakefulness that starts early and lasts throughout the night or having a problem falling asleep to begin with,” said Merino. “The good news is that hormone replacement therapy can get things back to the way they were. And getting better sleep will help to overcome insomnia.”

Insomnia is the most common sleep disorder. It affects 10% to 20% of people, mostly women. “The fact that sleep problems are more prevalent in women can be explained by the fact that among women, there is a higher incidence of conditions that disrupt sleep, such as depression,” said Cano.

“Insomnia is much more common in adult women than adult men. And at menopause, women find that the insomnia only gets worse,” Merino added. “But around that same age, 50 years old, what we start to see more frequently in men is REM sleep behavior disorder, a type of parasomnia that’s a risk marker of degenerative nerve diseases.”

Cano emphasized one finding that, though basic, is not well known. “After adjusting for socioeconomic characteristics, the difference between the sexes in reporting sleep problems is cut in half. This suggests that an important factor that explains why there are differences in sleep problems between the sexes is that women’s socioeconomic status is generally lower than men’s.

“As for sleep apnea in particular,” Cano continued, “the kinds of symptoms that women have can be different from the classic ones seen in men — snoring, pauses in breathing, and daytime sleepiness; women are being underdiagnosed, and when they are diagnosed, that’s happening at a later age and at a higher BMI.”

So, it’s alarming that, as reported by SEPAR, 90% of women with obstructive sleep apnea are not being diagnosed.

“The majority of research studies on sleep apnea have focused on men — given the prevalence of cases — and the results have been extrapolated to women. This is why there’s still a lot of work to be done in terms of better defining the characteristics specific to each sleep disorder and how they relate to each sex,” said Cano. “Being able to identify the relationship between the different sex-related phenotypes and each condition will allow us to take a precision medicine approach tailored to a patient’s particular characteristics.”

As Merino put it, “The approach to sleep disorders is always personalized. The patient’s sex, in and of itself, doesn’t have that great of an impact on this approach. What does have a great impact are women’s life stages. There are some subtle differences here and there, such as types of continuous positive airway pressure machines. The ones that are designed for women have masks that are better suited to their facial features, which differ from men’s.”

A precision medicine approach can be taken to treat any sleep disorder. For insomnia, the approach allows healthcare professionals to employ an appropriate cognitive-behavioral therapy plan or to determine which drugs would be more effective — all on the basis of symptoms and the characteristics of the particular case. Regarding sleep apnea, Cano explained, “Taking into account the different anatomical characteristics or the higher prevalence of positional apnea will also allow us to offer different therapeutic alternatives to continuous positive airway pressure, such as mandibular advancement devices or positional therapy devices.”

Women should be encouraged to develop good sleep habits. These include taking circadian rhythms into account and aligning lifestyles accordingly. It also means going to bed earlier than the men in the household. For menopausal women, recommended sleep habits range from keeping their bedroom at an ideal temperature, following a diet rich in vegetables to avoid becoming overweight, and exercising daily. While this advice may be more applicable to teenagers, adults can benefit from it as well: electronic devices should be turned off well before bedtime. Whether from a phone screen, a tablet screen, or a TV screen, the light emitted can keep one awake, which can be harmful to one’s health.

Cano and Merino have disclosed no relevant financial relationships.