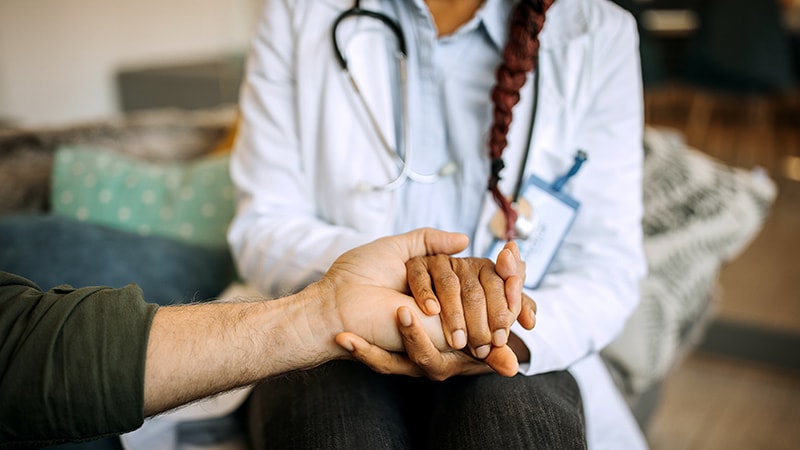 Most healthcare providers are comfortable recommending palliative care (PC) for their patients with interstitial lung disease (ILD), but most do so at the time of disease progression, rather than diagnosis, as indicated on survey data from 128 clinicians.

ILD is associated with a high mortality rate and profound symptoms that contribute to poor quality of life, write Rebecca A. Gersen, MD, of Johns Hopkins University, Baltimore, and colleagues.

“Nevertheless, there is often a lack of preparedness for death by both patients and providers, contributing to increased distress,” they say. Clinician perspectives on the use of PC for ILD patients have not been well studied, although PC is not limited to end-of-life care and is recommended for ILD patients by professional organizations, including the American Thoracic Society, they say. “PC is successful in improving breathlessness in chronic lung disease and can increase survival,” they note.

In a study published in the journal Chest, the researchers surveyed healthcare providers at 68 Pulmonary Fibrosis Foundation centers across the United States. The survey was sent and collected by email and a restricted social media platform. A total of 128 providers from 34 states completed the survey between October 2020 and January 2021. Of these, 61% were physicians, and 67% identified as White.

Healthcare providers who reported that they rarely referred patients to palliative care were significantly more likely to cite a lack of local PC options (P < .01). Those who rarely referred patients for PC also were significantly less likely to feel comfortable discussing prognoses or advance directives in the ILD clinic (P = .03 and P = .02, respectively).

Among the 23% of responders who reported that they rarely referred patients, 66% said they did not have PC at their institution.

“In addition to understanding and addressing barriers to care, educational resources may be key to improving PC delivery to the ILD population,” the researchers write.

The study findings were limited by several factors, including voluntary participation, lack of a validated questionnaire, and use of self-reports, which may not reflect physicians’ actual practice, the researchers note. Other limitations include the use of US data only, which may not generalize to countries with different healthcare models, they say.

However, the results were strengthened by the use of data from providers at a range of institutions across the United States and by the high overall survey response rate, the researchers say.

“While ILD providers reassuringly demonstrate knowledge and interest in PC involvement, no current system exists to facilitate and monitor response to referral,” they note. “Future research is desperately needed to address barriers to the provision of PC in order to enhance access to a critical service in the management and care of patients with ILD,” they conclude.

The study was supported by the National Heart, Lung, and Blood Institute of the National Institutes of Health. The researchers have disclosed no relevant financial relationships.