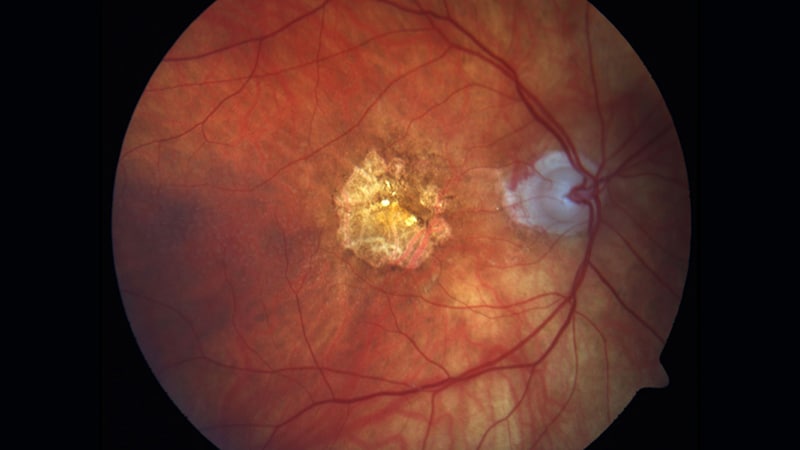 Patients whose vision is impaired by atrophic age-related macular degeneration can integrate their natural peripheral vision with images supplied through a subretinal implant, researchers say.

With magnification supplied by augmented reality glasses, patients reached a visual acuity in the range of 20/63–20/98 up to 2 years after implantation.

These findings suggest that the next versions of the device could restore central visual acuity to patients who have lost it to one of the most common retinal diseases, said Daniel Palanker, PhD, a professor of ophthalmology at Stanford University in Palo Alto California.

“Patients can recognize letters and so on, and simultaneously see the rest of the field with their natural vision,” he told Medscape Medical News.

The study by Palanker and his colleagues was published in Nature Communications.

In atrophic macular degeneration, people lose central vision due to the atrophy of photoreceptors at the center of the macula while the remaining photoreceptors still provide peripheral vision.

For almost two decades, Palanker and his colleagues have been working on replacing the lost cells with photovoltaic pixels. For this study, they tested a subretinal implant measuring 2 mm in width and 30 μm in thickness that contained 378 hexagonal pixels, each 100 μm in width.

In the first phase of the study, opaque virtual reality glasses (Prima-1) equipped with a video camera transmitted images to the chip through near-infrared light. The pixels converted this light into electric current to selectively stimulate the secondary neurons in the retina.

Two years ago, Palanker and his colleagues reported that five patients who had been implanted with the device could perceive large monochromatic shapes. The patients were all over 60 and had advanced macular degeneration with no photoreceptors left in the central macula.

In the second phase of the experiment, the researchers replaced the opaque virtual reality glasses with transparent augmented reality glasses (Prima-2), which allow unobstructed natural vision by the fellow eye and by the peripheral field of the operated eye, as well as prosthetic central vision in that eye. The Prima-2 system also allows magnification of the images produced by the camera. These changes significantly improved the visual acuity in three patients. (One patient died of unrelated causes.)

To test whether the patients could simultaneously use prosthetic and residual natural vision, the researchers displayed green bars of various orientations (vertical, horizontal or diagonal) on a large screen. They created another set of white bars on the display inside the glasses. Patients were able to correctly identify the orientation of all the bars. When the bars on the screen were in the same orientation as those in the glasses, they appeared to the patients to be continuous.

The patients cannot yet use the implants to improve their activities of daily living, Palanker says. “In my view, it’s more of a proof of concept, because to get a really useful device for a lot of patients, we need to improve resolution further.”

Already the researchers are testing implants in rats that are one fifth the size of the current implants and theoretically could provide visual acuity of 20/80 in humans without magnification, Palanker said.

Asked to comment on the human subjects, Paola Binda, PhD, an associate professor of physiology at the University of Pisa in Italy, said, “In those patients, where the implant worked fine ― which are only 3 out of 5, unfortunately ― the results are really are promising,” she said.

Binda, who was not involved in the study, previously helped test the Argus, an implant on the surface of the retina also connected to a camera. She said the approach of Palanker’s team had several advantages. In contrast to the Argus, the new implant’s photovoltaic pixels don’t need a cable to receive their signal, making the surgery simpler. And a subretinal implant can take advantage of retina’s natural ability to process images.

Also, because the images are projected on the glasses, patients can scan them by moving their eyes, a type of movement not possible with the Argus camera, Palanker said.

Binda reports no relevant financial relationshps. Palanker reports a relationship with Pixium Vision, which is working to commercialize the Prima.

Laird Harrison writes about science, health, and culture. His work has appeared in magazines, newspapers, on public radio, and on websites. He is at work on a novel about alternate realities in physics. Harrison teaches writing at the Writers Grotto. Visit him at lairdharrison.com or follow him on Twitter: @LairdH.