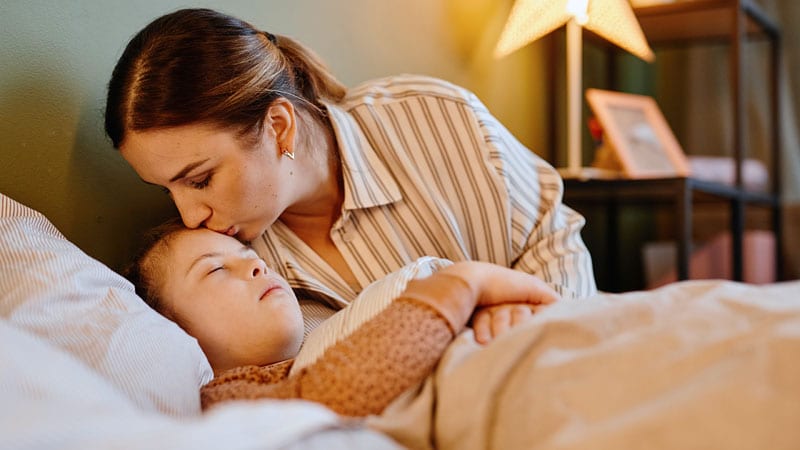 In a phase I study, 42 adolescents received a surgically implanted device that moves the tongue forward during sleep. Results at 1-year follow-up showed 66% “responded well” to treatment and showed a drop in apnea-hypopnea index (AHI) of at least 50%.

“Parents came back to us and said not only is the sleep better but my child seems to be doing better during the day,” lead investigator Christopher Hartnick, MD, director of the Division of Pediatric Otolaryngology and the Pediatric Airway, Voice, and Swallowing Center at Massachusetts Eye and Ear, Boston, told Medscape Medical News.

The findings were published online April 21 in JAMA Otolaryngology–Head and Neck Surgery.

Upper airway simulation has been shown previously to be effective for adults with OSA, but up until now, the process has not been evaluated in children.

The device used in the current study “stimulates the hypoglossal nerve to protrude the tongue and open the airway on inspiration during sleep,” the investigators note.

“This study was born out of the frustration of not having an effective treatment option for children with Down syndrome who struggle with sleep apnea,” Hartnick said in a news release.

A total of 42 adolescents (67% male; mean age, 15 years) with Down syndrome and persistent severe OSA after adenotonsillectomy were implanted with the hypoglossal nerve stimulator. All were followed for 12 months.

The surgery was safe, with the most common adverse event being temporary tongue discomfort in five patients (12%). This typically resolved in weeks, the researchers note.

Results showed response rates and adherence to therapy was high. The mean duration of nightly therapy was 9 hours, with 40 children (95.2%) using the device at least 4 hours every night.

Nearly two-thirds of the children had at least a 50% reduction in their AHI, while roughly three-fourths had a 12-month follow-up AHI of less than 10 events per hour.

There were also significant improvements in polysomnographic and parent-reported quality of life outcomes 12 months after the implant, including improvement in sleep and daily functioning, behavior, and language.

“Sleep apnea remains one of the most common conditions that I grapple with working with patients with Down syndrome and their families,” co-investigator Brian Skotko, MD, Emma Campbell endowed chair on Down Syndrome at Massachusetts General Hospital, Boston, said in the release.

“Until now, so many of our patients had run out of treatment options, and their health and well-being were declining. Now, with the hypoglossal nerve stimulator treatment, we may have an effective and safe way to treat apnea and maximize brain health for people with Down syndrome,” Skotko added.

Hartnick and Skotko have received a $4 million, 5-year grant from the National Institutes of Health to assess whether upper airway stimulation might help cognition in children with Down syndrome.

Co-authors of an invited commentary said they “applaud” the researchers for their “landmark” investigation, which demonstrated a response to upper airway stimulation in children with Down syndrome and OSA that is on par with what has been achieved in adults with OSA.

“They have established the safety of the procedure; however, future research is necessary to optimize the results of implant,” write Norman Friedman, MD, and Katherine Green, MD, both from the Department of Otolaryngology–Head and Neck Surgery, University of Colorado School of Medicine, Aurora.

“Further assessment regarding patient selection and the systematic preoperative identification of potential barriers that might affect successful use of therapy will be beneficial to improve longitudinal outcomes and success in this population that is uniquely different from the adult cohorts that have received implants to date,” they add.

The study was funded by Inspire Medical Systems Inc, which provided eight devices for the study but otherwise did not have a role in its design and conduct. The LuMind IDSC Down Syndrome Foundation also provided funding for the study. Hartnick and the editorialists have disclosed no relevant financial relationships. A complete list of disclosures for the other investigators is available in the original article.