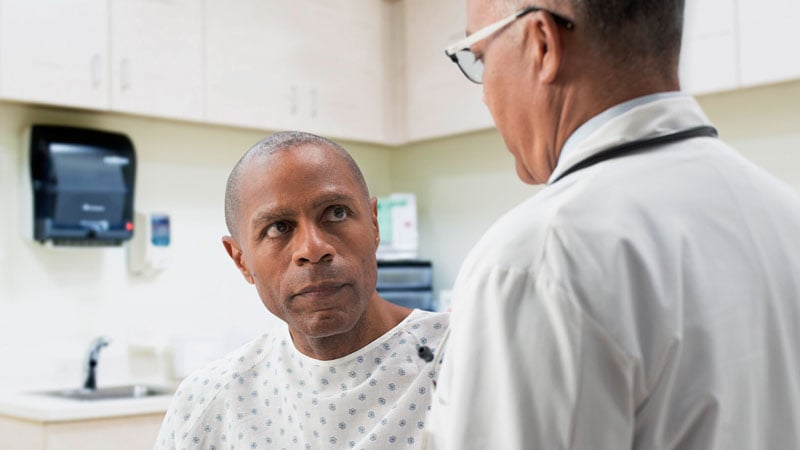 Increasing social services spending by 10% led to improved survival for non-Hispanic Black adults with cancer, according to new research.

“We know from prior research that outcomes are worse for minorities,” said lead author Justin Michael Barnes, MD, from the Department of Radiation Oncology at Washington University School of Medicine in St. Louis, Missouri. “It’s thought that some of the differences are related to impaired access to healthcare for minorities, which is related to social determinants of health. This includes socioeconomic factors, educational attainment, place of residence, as well as environmental stressors.

“Our data show that greater state welfare expenditures were associated with greater 5-year survival among Black patients and decreased Black–White disparities,” said Barnes. “I think these data are thought provoking, but they certainly aren’t the end. I see these data as a proof-of-concept project.”

Barnes reported the findings at a press conference held in advance of the American Society of Clinical Oncology (ASCO) 2022 annual meeting, during which the study will be presented (abstract 6509).

For the study, Barnes and colleagues evaluated the association of 5-year overall survival and public welfare spending in 2,925,550 individuals aged 18 years and older who were diagnosed with cancer during the period 2007–2016. The cohort was drawn from the Surveillance, Epidemiology, and End Results Program. In addition, annual state spending data were obtained from the US Census Bureau. The team examined survival outcomes by race and ethnicity as well as by cancer site. The investigators accounted for factors such as age, sex, metropolitan residence, state, county-level income and education, insurance status, cancer site, stage at diagnosis, and year of diagnosis.

Much of public welfare spending was related to Medicaid but also included programs that provide subsidy assistance for individuals, such as Supplemental Security Income.

As compared with White patients, the 5-year overall survival rate was 10.8% lower among non-Hispanic Black patients. But there was a 4.46% (P for interaction < .001) narrowing of the 5-year overall survival disparity in non-Hispanic Black patients in comparison with White patients per 10% increase in spending, or a 42% closure of the 10.8% disparity.

“Some type of public welfare seems to be helping improve oncologic outcomes for some of our most socioeconomically at-risk patients, but we don’t know the specifics,” Barnes concluded. “Additional work is needed to identify the most influential public health expenditures. If we can do this, we can more rigorously evaluate state-level policies and their association with cancer outcomes.”

Weighing in on the data, Sarah P. Cate, MD, director, Special Surveillance and Breast Program, Mount Sinai Health System, New York, noted that racial disparities have been identified in many areas of healthcare and with respect to many diseases. “In the world of oncology, time to diagnosis and treatment significantly impacts overall survival,” she told Medscape Medical News. “Many studies are currently underway to investigate why certain ethnic groups have worse cancer outcomes.”

This study is important, she noted, in that it “highlights a discrete source of correcting these disparities in a large group of patients. Obviously there are multiple barriers to care, but increased public welfare spending in oncology should decrease some of these disparities.”

Julie R. Gralow, MD, ASCO’s chief medical officer and executive vice president, commented that it is known that state public welfare spending can mitigate structural racism and at least partially address social determinants of health, such as financial stability, education, place of residence, and insurance status. “This research found that states that increased their public health spending improved overall survival in Black patients with a variety of solid tumors and also resulted in a decrease in racial disparities in survival,” she said. “This important data provides clear support for the benefits of investment in public welfare spending at the state level, including Medicaid expansion.”

The study did not receive funding. Barnes and Cate have disclosed no relevant financial relationships. Gralow has relationships with Genentech, AstraZeneca Hexal, Puma BioTechnology, Roche, Novartis, Seagen, and Genomic Health.