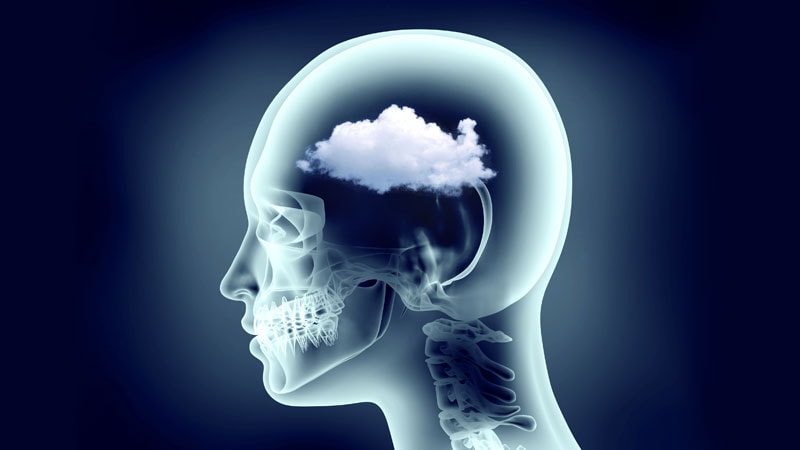 In early September, about a week after recovering from COVID-19, Barri Sanders went to the bank to pay a bill. But by mistake, she transferred a large amount of money from the wrong account.

Sanders, 83, had not had confusion like that before. Suddenly, the Albuquerque, NM, resident found herself looking up from a book and not remembering what she had just read. She would stand up from her chair and forget what she meant to do.

“I kind of thought it was just the aging process,” she says. Combined with sudden balance issues, insomnia, and a nagging postnasal drip, the overall effect was “subtle, but scary,” she says.

After 5 days of this, she went to bed and slept the whole night through. She woke up in the morning to find her balanced restored, her sinuses clear, and the mental fog gone. What she’d had, she realized, wasn’t a rapid start of dementia, but rather a mercifully short form of long COVID.

Somewhere between 22% and 32% of people who recover from COVID-19 get “brain fog,” a non-scientific term used to describe slow or sluggish thinking. While this is disturbing at any age, it can be particularly upsetting to older patients and their caregivers, who fear they’re having or witnessing not just an after-effect of a disease, but the start of a permanent loss of thinking skills. And some scientists are starting to confirm what doctors, patients, and their families can already see: Older patients who have had COVID-19 have a higher risk of getting dementia or, if they already have mental confusion, the illness may worsen their condition.

British scientists who studied medical records from around the world reported in the journal The Lancet Psychiatry in August that people who recovered from COVID-19 had a higher risk of problems with their thinking and dementia even after 2 years had passed.

Another 2022 study, published in the journal JAMA Neurology, looked at older COVID-19 patients for a year after they were discharged from hospitals in Wuhan, China. Compared with uninfected people, those who survived a severe case of COVID-19 were at higher risk for early onset, late-onset, and progressive decline in their thinking skills. Those who survived a mild infection were at a higher risk for early onset decline, the study found.

“We see a stepwise decline in their cognition during the COVID episode, and then they never get back up to their baseline,” says Metzger, medical director at Hebrew SeniorLife.

New research is beginning to back up such findings.

People who got COVID-19 were twice as likely to receive a diagnosis of Alzheimer’s disease in the 12 months after infection, compared to those who didn’t get COVID, according to a study published in the journal Nature in September, which analyzed the health care databases of the U.S. Department of Veterans Affairs.

Joshua Cahan, MD, a cognitive neurologist at Northwestern University, advises caution about applying such a specific label simply from a patient’s medical chart. After all, he notes, few patients get tested to confirm that they have the proteins linked to Alzheimer’s.

“Probably the most appropriate conclusion from that is that there’s an increased risk of dementia after a COVID infection,” he says, “but we don’t know whether it’s truly Alzheimer’s disease or not.”

There could be a number of reasons why COVID-19 triggers a decline in thinking skills, says Michelle Monje, MD, a neuroscientist and neuro-oncologist at Stanford University.

In a paper published in October in the journal Cell , Monje and her co-author, Akiko Iwasaki, PhD, a professor of immunobiology at Yale University, propose six possible triggers for brain fog caused by COVID: inflammation in the lungs and respiratory passages that leads to inflammation and dysregulation of the central nervous system; autoimmune reactions that damage the central nervous system; brain infection directly caused by the coronavirus (though, they note, this appears rare); a re-activation of a Epstein-Barr virus, which can lead to neuro-inflammation; triggered by the coronavirus; and/or complications from severe cases of COVID-19, possibly involving periods of low blood oxygen and multi-organ failure.

One issue with the concept of brain fog is that, like the term itself, the condition can be tough to define for doctors and patients alike and hard, if not impossible, to capture on common cognition tests.

These days, patients often arrive at the Center of Excellence for Alzheimer’s Disease, in Syracuse, NY, complaining that they “don’t feel the same” as they did before contracting COVID-19, says Sharon Brangman, MD, the center’s director and the chair of the Geriatrics Department at Upstate Medical University.

But the evidence of diminished cognition just isn’t there.

“There’s nothing that we can find, objectively, that’s wrong with them,” she says. “They’re not severe enough to score low on mental status testing.”

But specialized, directed testing can find some probable signs, says Cahan, who evaluates patient cognition in a long COVID clinic at Northwestern University.

He often finds that his long COVID patients score in the low normal range on cognitive testing.

“Patients do have a complaint that something’s changed, and we don’t have prior testing,” he says. “So it’s possible that they were maybe in the high normal range or the superior range, but you just don’t know.”

He says he has seen very high-performing people, like lawyers, executives, PhDs, and other professionals, who have tests that might be interpreted as normal, but given their level of achievement, “you would expect [higher scores].”

Like Sanders, many of those who do have muddled thinking after a COVID infection return to their former mental status. A study published in the journal Brain Communications last January found that people who had recovered from COVID-19, even if they had a mild illness, were significantly more likely to have memory and other cognition issues in the months after infection. But after 9 months, the former COVID patients had returned to their normal level of cognition, the team at Britain’s University of Oxford reported.

Notably, though, the average age of the people in the study was 28.6.

At the Northwestern clinic, Cahan treats patients who have struggled with COVID-induced cognition issues for months or even years. A rehabilitation program involves working with patients to come up with ways to compensate for cognitive deficits – such as making lists – as well as brain exercises, Cahan says. Over time, patients may achieve a 75% to 85% improvement, he says.

Monje hopes that one day, science will come up with ways to fully reverse the decline.

“I think what is likely the most common contributor to brain fog is this neuro-inflammation, causing dysfunction of other cell types,” she says. “And, at least in the laboratory, we can rescue that in mouse models of chemotherapy brain fog, which gives me hope that we can rescue that for people.”

Brain, Behavior and Immunity: “Fatigue and cognitive impairment in Post-COVID-19 Syndrome: A systematic review and meta-analysis.”

Journal of the Neurological Sciences: “Mid- and Long-Term Neurological and Neuropsychiatric Manifestations of Post-COVID-19 Syndrome: A Meta-Analysis,”

The Lancet Psychiatry: “Neurological and Psychiatric Risk Trajectories after SARS-CoV-2 Infection: An Analysis of 2-Year Retrospective Cohort Studies Including 1 284 437 Patients.”

JAMA Neurology: “One Year Trajectory of Cognitive Changes in Older Survivors of COVID-19 in Wuhan, China: A Longitudinal Cohort Study.”

Neuron: “The Neurobiology of Long COVID.”