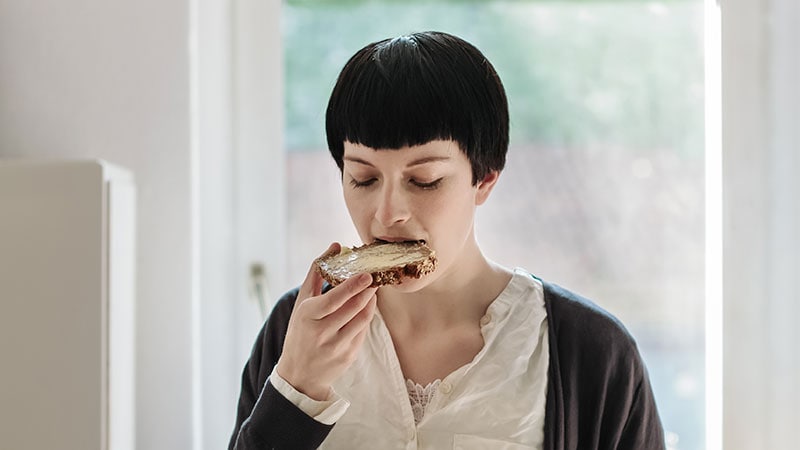 In a gluten challenge trial, latiglutenase (IMGX003) reduced symptom severity and mucosal deterioration in patients with celiac disease, according to a new study published in Gastroenterology.

Latiglutenase led to 95% gluten degradation in the stomach, as indicated by measurements of gluten-immunogenic peptides in urine, wrote Joseph A. Murray, MD, a gastroenterologist at the Mayo Clinic, Rochester, Minn., and Jack A. Syage, PhD, CEO and cofounder of ImmunogenX Inc., Newport Beach, Calif., and colleagues on behalf of the CeliacShield Study Group.

For patients with celiac disease, the only available treatment is a life-long gluten-free diet (GFD). Low levels of gluten exposure can lead to ongoing inflammation and the risk of complications, and about half of patients continue to experience moderate to severe symptoms.

“Although a GFD can reduce symptoms and intestinal damage, the diet is neither easy nor readily achievable by many patients and, furthermore, can be lacking in essential nutrients,” the authors wrote.

In a randomized, double-blind, placebo-controlled gluten challenge study, the research team assessed the efficacy and safety of a 1,200-mg dose of IMGX003, formerly known as ALV003. The dual-enzyme supplementation therapy was “designed to mitigate the impact of gluten exposure in patients who are attempting to adhere to a GFD.”

The phase 2 trial was conducted at the Mayo Clinic with adult patients (aged 18-80 years) who had physician-diagnosed and biopsy-confirmed celiac disease, followed a GFD for more than 1 year, and had histologically well-controlled disease. During the study, they were exposed to 2 g of gluten per day for 6 weeks.

Among the 50 patients randomized, 43 completed the study, with 21 assigned to the IMGX003 group. About 74% of the participants were women; the mean age of all participants was 43.8 years.

Overall, the mean change in the ratio of villus height to crypt depth was –0.04 for IMGX003, compared with –0.35 for placebo. In addition, the mean change in the density of intraepithelial lymphocytes for IMGX003 was 9.8, compared with 24.8 for placebo. Based on the ratio of the means for both groups, the researchers estimated an 88% reduction of change in villus height to crypt depth and a 60% reduction of change in intraepithelial lymphocytes.

The mean change from baseline for symptom severity was evaluated over three 2-week periods, and the percent changes showed consistent reduction of symptom worsening during that time. Based on the effect size and trend significance, the P values were .014 for abdominal pain, .030 for bloating, .002 for tiredness, and < . 001 for nonstool composite.

The mean change in gluten-immunogenic peptides in urine (GIP) relative to baseline was 0.59 for IMGX003, compared with 11.53 for placebo. The researchers estimated an efficacy of gluten degradation in vivo of 95%.

“Measurement of GIP in urine demonstrated the purported mechanism of action of IMGX003, namely, degradation of gluten in the stomach, thereby preventing the triggering of the immunogenic autoimmune response,” the authors wrote. “Targeting gluten by degrading the immunogenic peptides before absorption minimizes or abrogates the cascading innate and adaptive immune responses that characterize the inflammatory response to gluten in CeD [celiac disease].”

The study was sponsored by ImmunogenX Inc., and partially funded by a grant from the National Center for Complementary and Integrative Health. The project was further supported by grants from the National Center for Advancing Translational Sciences and the National Institute of Diabetes and Digestive and Kidney Diseases. Several authors reported receiving grants from numerous funders, including ImmunogenX, and some reported being a cofounder, stockholder, or board director of the company.