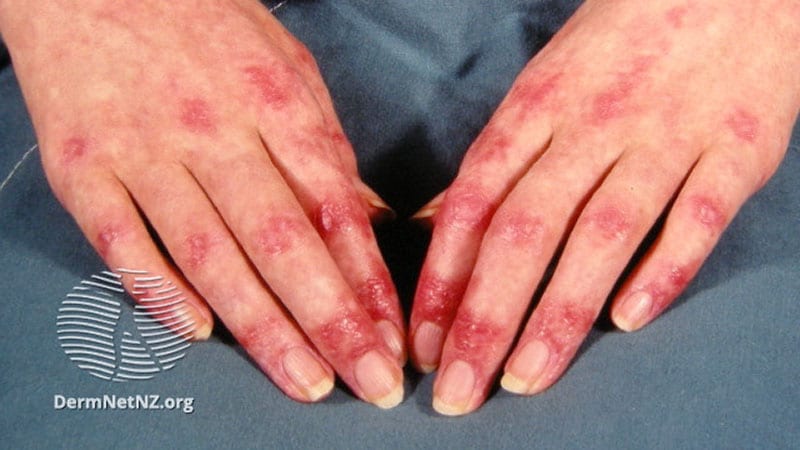 An investigative synthetic cannabinoid receptor type 2 (CB2) agonist, lenabasum, was associated with greater improvements than placebo in patients with skin-predominant dermatomyositis — some of it statistically significant — in a phase 2 double-blind, randomized, controlled study published in the Journal of Investigative Dermatology.

And in a recently completed phase 3 trial, reported by the manufacturer, a subpopulation of patients with active skin disease and no active muscle disease again showed greater reductions in CDASI activity scores — a secondary outcome in the trial.

However, the phase 3 DETERMINE trial produced negative findings overall. It enrolled a more heterogeneous group of patients — including those with both muscle weakness and skin involvement — and its primary outcome measure was a broader composite measure, the Total Improvement Score. The trial failed to meet this primary endpoint, Corbus Pharmaceuticals, the developer of lenabasum, announced in a press release in June 2021.

The phase 3 results are “frustrating” for patients with symptomatic and refractory skin manifestations of dermatomyositis (DM), given the promising findings from the phase 2 trial and from an open-label extension study, said Werth, professor of dermatology and medicine, University of Pennsylvania, Philadelphia, and principal investigator and coprincipal investigator of the phase 2 and phase 3 studies, respectively.

Werth is scheduled to present the results from the phase 3 trial at the annual European Congress of Rheumatology meeting (EULAR) next month.

“With lenabasum, we have a therapy that doesn’t work for every patient, but does work for quite a number of them,” Werth said in an interview. “It’s oral, it’s not really that immunosuppressing, and there aren’t many side effects. Right now, patients are often being managed with steroids…we really need treatments that are not as toxic.”

Robert Spiera, MD, a rheumatologist who led trials of lenabasum for treatment of diffuse cutaneous systemic sclerosis (dcSSc), agreed. “The CB2 agonist strategy is appealing because it’s non-immunosuppressing and has both anti-inflammatory and anti-fibrotic properties,” he said in an interview. “I wouldn’t want to give up on it…especially [for patients] with scleroderma and dermatomyositis who are treated with substantial drugs that are associated with morbidity.”

While the phase 2 trial of the drug for dcSSc showed clear benefit over placebo, the phase 3 trial did not meet its primary endpoint using the American College of Rheumatology Combined Response Index in Diffuse Cutaneous Systemic Sclerosis.

It allowed background immunosuppressant therapy to reflect real-world clinical practice, and “there was such a high response rate to [that therapy, largely mycophenolate] that there was little room to show benefit beyond that,” said Spiera, director of the Vasculitis and Scleroderma Program, Hospital for Special Surgery, New York.

The drug led to more improvement in the small subset of participants who were not receiving background immunotherapy during the trial, he noted.

Corbus is currently “seeking a partnership to further explore the drug” for treatment in different subpopulations, according to a company spokesperson. Results of a phase 2 trial of lenabasum for the treatment of systemic lupus erythematosus — with a pain rating as the primary outcome measure — are expected soon, he said.

The single-center phase 2 trial of lenabasum for DM enrolled 22 adults with minimal muscle involvement as evidenced by normal maximal resistance on muscle testing at entry and throughout the study. Most were taking immunosuppressant medication, and all had CDASI scores of at least 20, with mean scores in the severe range (> 26). Symptoms registered on patient-reported outcome measures were moderate-to-severe.

Patients received a half-dose of lenabasum (20 mg daily) for 1 month and a full dose (20 mg twice daily) for 2 months, or placebo, and were followed for an additional month without dosing.

Starting at day 43 — approximately 2 weeks after the dose was increased — there was “a trend for the change from baseline CDASI to be greater” in the lenabasum group compared with those on placebo, Werth and her colleagues reported. The differences reached statistical significance on day 113 (P = .038), a month after patients discontinued lenabasum, “suggesting that the modulation of the inflammatory response by lenabasum continued beyond its last dose,” they wrote.

Five of the 11 patients treated with lenabasum (45%), and none of those on placebo, achieved at least a 40% reduction in the CDASI activity score by the end of the study.

Patients in the lenabasum group also had greater improvement in the Skindex-29 Symptoms scores — an objective measure of itch — and improvements in other secondary efficacy outcomes, including pain, though these did not reach statistical significance.

Skin biopsies before and after treatment showed significant reductions in inflammatory cytokines relevant to DM pathogenesis. Patients treated with the CB2 agonist had a downward trend in the CD4+ T cell population, which correlated with decreased CDASI activity scores, for instance, and a decrease in IL-31 protein expression, which correlated with decreased Skindex-29 Symptoms scores, the investigators reported.

There were no serious adverse events related to the CB2 agonist, and no treatment discontinuations.

The main part of the phase 2 trial, conducted from 2015 to 2017, was followed by a 3-year, open-label extension, in which 20 of the 22 patients took lenabasum 20 mg twice a day. The drug continued to be safe and well tolerated, and the CDASI activity score and other outcomes improved through year 1 and remained stable thereafter, according to a poster presented by Werth at the 2021 EULAR meeting.

After 1 year in the open-label extension, 60%-70% of patients had achieved mild skin disease, and 75% had achieved at least a 40% reduction in CDASI activity.

“A lot of patients, even if they weren’t completely cleared, were much happier in terms of their itch,” said Werth, also chief of dermatology, Corporal Michael J. Crescenz Veterans Affairs Medical Center, Philadelphia, Pennsylvania. “It’s been difficult for a lot of them now that they’re off the long-term extension…a lot of them are flaring.”

In the lab, with funding from the National Institutes of Health, Werth is continuing to investigate how lenabasum may be working in DM. A paper just published in the open access journal Arthritis Research & Therapy describes CB2 receptor distribution and upregulation on key immune cells in the skin and blood, and how, in DM skin, its highest expression is on dendritic cells.

Through both mechanistic and more clinical research, “it’s important to understand the characteristics of the people [lenabasum] worked in or didn’t work in,” she said.

And in clinical trials, it’s important to capture meaningful improvement from the patient perspective, she said. “It may be,” she noted, “that more global, systemic assessments are not the way to go for autoimmune skin disease.”

For dcSSc, Spiera said, it’s possible that a CB2 agonist may be helpful for patients who have been on immunosuppressants, particularly mycophenolate, for more than 6 months “and are still struggling.”

The phase 2 trial in DM was funded by the National Institutes of Health, the US Department of Veterans Affairs, and Corbus Pharmaceuticals. The phase 3 trials in DM and in dcSSc were funded by Corbus. Werth disclosed grant support from Corbus and several other pharmaceutical companies. Spiera disclosed that he has received grant support or consulting fees from Roche-Genentech, GlaxoSmithKline, and several other pharmaceutical companies.

Christine Kilgore is an independent medical journalist based in Virginia who writes about medical research, clinical care, and the healthcare system.