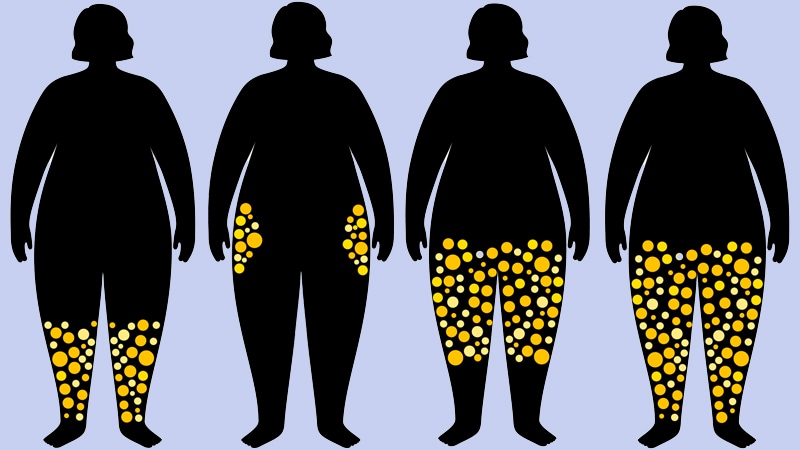 According to the most recent medical research, approximately 10% of the global female population develop lipedema, a disease characterized by the abnormal accumulation of subcutaneous adipose tissue. This condition, however, continues to go unrecognized.

“While it’s true that, little by little, people are becoming more aware of this disorder, there are still many who don’t know that it exists or are unfamiliar with it,” noted Alba López, a dietician/nutritionist at the Júlia Farré Nutrition Center in Barcelona, Spain.

The cause of lipedema is still unknown. What is known is that the disease mostly affects female persons, usually starting in puberty. Hormonal changes during pregnancy and menopause may exacerbate the condition. López explained that lipedema presents as “a higher-than-expected accumulation of fat or an increase in mass in certain areas of the body, features that lead to it sometimes being mistaken with obesity. But there are differences. One that stands out: with lipedema, there’s a disproportionate accumulation of fat in the extremities, usually the lower limbs but also in the upper limbs.”

Generally, the symptoms first appear in the lower trunk. The condition will show as a bilaterally symmetric increase in mass relative to the rest of the body. Another common clinical characteristic, López pointed out, is “the cuff sign or fat pad of lipedema that we see at the ankle.” Over the past year, she and her colleagues have treated about 30 female patients with this condition. Despite the high incidence of the disorder among the female population, “the patients whom we primarily see at our offices are not those who have lipedema. That’s because a great number of people out there aren’t aware that this disorder exists. But it’s becoming more and more common, or it’s being more readily detected,” said López.

In addition to a sense of heaviness, “lipedema is accompanied by the development of increased sensitivity to touch or pain at digital pressure. In many cases,” she emphasized, “there’s also easy bruising due to increased capillary fragility.”

According to various studies, the increase in adipose tissue mass — which causes pain when the person is touched or when walking or exercising — progressively worsens over time, leading to permanent and incapacitating damage in the lymphatic system and circulatory system. This can result in other, even more complex diseases.

Lipedema is included in the World Health Organization’s International Classification of Diseases. The main issue with this disease is threefold: it is highly underdiagnosed; it is little known to many healthcare professionals; and its symptoms frequently lead to a misdiagnosis of obesity.

Although not much is known about the causes of this disorder, a study carried out by researchers at Padua University Hospital in Italy and Lausanne University Hospital in Switzerland suggests that polygenic susceptibility combined with hormonal, microvascular, and lymphatic disorders may be partly responsible for its development.

“Although the actual triggers of this alteration are not known, lifestyle plays a very significant role in controlling the symptoms. So, it’s very important to follow an anti-inflammatory diet. Conversely, even though they’re not causes, leading a sedentary lifestyle or not having a balanced diet may be factors that make the situation worse,” added López.

Current treatment for this chronic condition primarily focuses on slowing down the rapid progression. There are two approaches to treatment. “On the one hand, there’s surgery, which can get rid of the localized deposits of lipedema fat tissue. Then there’s conservative treatment, which includes a set of strategies that have the main objective of improving the patient’s quality of life, relieving their discomfort, and reducing pain — all of which may help bring about better outcomes following subsequent surgery,” explained López. He added, “Conservative treatment includes compression, lymphatic drainage techniques, pressure therapy, VASER liposuction, physical activity, and an appropriate diet.”

The authors of the study mentioned that it’s essential for the patient to have an active lifestyle and to maintain a healthy diet. However, adopting these habits will not prevent adipose tissue from increasing, though these measures could reduce inflammation and improve quality of life. Because insulin promotes lipogenesis, a diet that avoids glycemic and insulin peaks may be desirable.

The authors of the study indicated that aquatic physical activity seems to be particularly beneficial for patients with lipedema because water pressure promotes lymphatic drainage and buoyancy reduces the load on the joints of lower limbs. The use of compression garments can reduce the pain and discomfort of affected limbs. Complex decongestive lymphatic therapy may be useful as well. This treatment consists of manual lymphatic drainage along with multilayered and multicomponent compression bandaging and physical exercise.

But, López noted, the number of female persons seeking treatment for lipedema is increasing, and it’s necessary to continue conducting research so as to understand the mechanisms that cause the disease. In addition, multidisciplinary therapeutic strategies for effective and safe treatment are needed. Some organizations, such as the Spanish Association of Women With Lipedema, are bringing attention to the urgent need to train National Health System (SNS) physicians in understanding this disease. Being able to make an early diagnosis will allow patients to start treatment as soon as possible. In addition, there is a push to allow patients to have access to conservative treatment within the SNS.