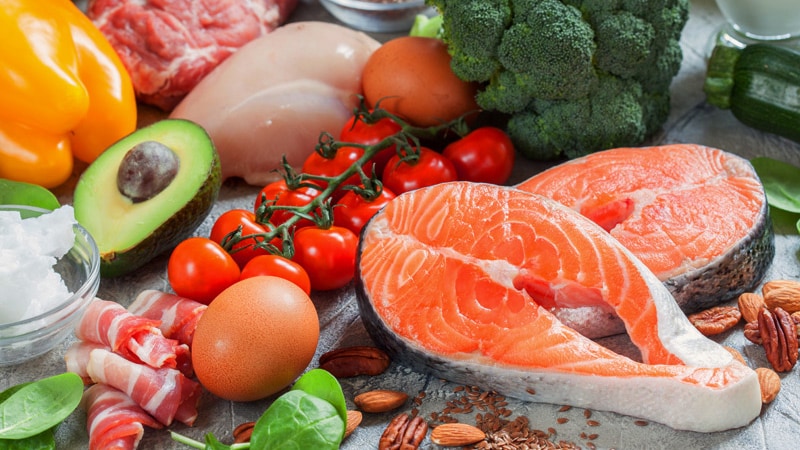 MADRID, Spain — According to the latest evidence, the ketogenic diet is emerging as an effective strategy not only to promote weight loss, but also to manage many comorbidities associated with obesity, including COVID-19. This development was revealed during the 8th International Scientific Symposium New Frontiers in Scientific Research, organized by PronoKal Group and held in Barcelona, Spain. During this conference, international multidisciplinary experts in the study and management of obesity presented the latest data on the benefits of treatment based on a very-low-calorie ketogenic diet.

Ana Belén Crujeiras, BSc, PhD, principal investigator of the Health Research Institute of Santiago de Compostela-Galician Health Service (IDIS-SERGAS) Group of Epigenomics in Endocrinology and Nutrition and the Biomedical Research Networking Center for Obesity and Nutrition Physiopathology (CIBEROBN) commented, “Nutritional ketosis has gained great interest in recent years because it is shown to have beneficial properties for health and promotes healthy aging, increasing longevity. Furthermore, in the case of obesity, we have more and more evidence that it is an effective treatment, mainly because to achieve this metabolic state (ketosis), routes that require the combustion of fats are activated, and this induces body weight loss.”

The specialist stressed that several strategies are currently used to induce nutritional ketosis. They all are characterized by low carbohydrate consumption (low-carbohydrate and high-fat diet; low-carbohydrate, low-fat diet; and intermittent fasting). But Crujeiras warned that to use it as a treatment for a disease such as obesity, it must be backed by strong and solid scientific evidence, moving away from the concept of fad diets.

In this sense, since 2010, Crujeiras’ team has developed several studies focused on analyzing the efficacy and safety of treatment with a very-low-calorie ketogenic diet, the results of which have been published in high-impact journals.

Crujeiras commented on the main conclusions drawn from these investigations. “Our work has shown that the very-low-calorie ketogenic diet is effective for rapid weight loss and maintenance of lost weight, as well as reducing fat mass, primarily visceral fat mass.”

“In this sense, a very interesting result is that despite the strong weight loss it induces, it preserves muscle mass and function and improves resting metabolic rate. These two variables are important, because all therapeutic strategies that exist to lose weight lead to a significant reduction in fat-free mass and also a reduction in energy expenditure at rest. This factor is associated with the risk of regaining lost weight, which is currently the great challenge in the treatment of obesity,” she added.

Crujeiras indicated that other notable evidence is the favorable impact on an emotional and psychological level. “To determine whether the caloric restriction of this diet and the strong weight loss that it involves were associated with an increased desire to eat, we also carried out an analysis with psychobiological tests. These results led us to conclude that this guideline is accompanied by a reduction of anxiety about food and an improvement in psychobiological parameters, thus increasing the quality of life of these patients.”

The specialist also mentioned that studies currently in progress show that the beneficial effect of this diet could be mediated by epigenetic mechanisms. “In our group, we have identified a specific DNA methylation pattern in people with obesity and we wondered if the very-low-calorie ketogenic diet would be able to reverse that methylome.

“We conducted a study in which we collected blood samples from patients on the very-low-calorie ketogenic diet (600 to 800 kcal/day) drawn before treatment, at peak ketosis, and at the end of treatment. After determining the global pattern of DNA in all patients with obesity targeted with this strategy and through bioinformatic analysis, we were able to obtain a methylation pattern. The results showed that after weight loss on the very-low-calorie ketogenic diet, the methylome that obese people initially had [was] reversed and matched that of normal-weight people.

“Continuing with this bioinformatic analysis more comprehensively, we wanted to see what kind of genes were differentially methylated, especially by the action of the ketosis itself. We found that most of the genes that exhibited differential methylation (in total, 292 identified) belonged to pathways that were involved in the regulation of metabolism, adipose tissue function, CNS function, and also carcinogenesis,” she continued.

Crujeiras commented that her research group also observed the modulatory role of the very-low-calorie ketogenic diet in the functioning of the immune system, “something that was not seen after similar weight loss induced by bariatric surgery. We analyzed this data in the context of the situation created by COVID-19, taking into account the evidence that people with obesity, compared to those with normal weight, have a higher risk of becoming infected and of having a poor evolution of the infection.”

In this regard, Crujeiras’ team launched an investigation to study the ACE2 gene methylation pattern, comparing obesity with normal weight and the situation after following a very-low-calorie ketogenic diet or undergoing bariatric surgery. “We observed that the methylation pattern of this gene in obese people was increased, compared to normal weight people,” she explained, “and this increase was observed mainly in visceral adipose tissue. However, we did not see this in subcutaneous adipose tissue, which is in agreement with the hypothesis that visceral adipose tissue is that mostly associated with obesity-related comorbidities.

“Likewise, the very-low-calorie ketogenic diet was associated with decreased ACE2 methylation, along with increased exposure of this gene. However, after bariatric surgery, no significant changes were observed, so we deduce that we are protecting the patient in some way from inflammation and, therefore, from the potential of serious illness if they become infected.

“In light of these results, we wanted to dig deeper into what was happening with the immune system of obese patients and that inflammation after a very-low-calorie ketogenic diet. We conducted a new study, currently under review in the journal Clinical Nutrition, with the same approach, comparing this diet with a standard hypocaloric balanced diet and bariatric surgery, in which we analyzed a wide battery of cytokines (32). We have observed a differential pattern between the very-low-calorie ketogenic diet and bariatric surgery.

“The results confirm our hypothesis that the very-low-calorie ketogenic diet remodels the inflammatory status of obese patients, and we were also able to verify that the increase in ketone bodies has immunomodulatory properties that were previously demonstrated in preclinical and animal models, which is associated with increased immune function in these patients,” added Crujeiras.

In regard to the next steps to take in the knowledge and clinical application of the benefits of this dietary strategy, Crujeiras commented that despite the fact that this diet is known to be effective, it is currently prescribed in a standard manner to all patients, “but there is some variability in the response and also a high risk of regaining weight, as is the case with any nutritional intervention strategy, with that ‘regain’ of lost weight being the main challenge in the treatment of obesity. In this sense, the epigenomic and epigenetic markers that we have identified could help us optimize treatment.”

She added that the future lies in establishing an algorithm that encompasses the patient’s exposome data, along with their genetic and epigenetic profile, to properly classify patients and prescribe a personalized precision therapeutic strategy.

Luca Busetto, MD, co-chair of the Obesity Management Task Force (OMTF) of the European Association for the Study of Obesity (EASO), also insisted on the challenge posed by the individualized application of the very-low-calorie ketogenic diet, emphasizing that this diet always be prescribed by a doctor after an appropriate assessment of the patient. “Obesity is not a matter of willpower or motivation, and most people with obesity have struggled their entire lives and failed because their biology tends to cause weight regain. Therefore, we should try to offer them the options that we currently have, including the very-low-calorie ketogenic diet, adapting them as much as possible to the profile of each patient.”

During his speech, Busetto presented the recent European guidelines for the management of obesity in adults with a very-low-calorie ketogenic diet, endorsed by EASO, and analyzed the main strengths of these recommendations.

Busetto remarked that three important points clearly justify the use of the very-low-calorie ketogenic diet. The first is the speed with which the initial weight loss occurs. Recent studies have looked at the benefits of a significant loss of excess weight early in a weight-loss diet, and although this is an association rather than a cause, the results strongly suggest that rapid initial weight loss increases the chance of the result being maintained in the long term. This clashes with the traditional recommendation of losing weight little by little as a strategy to achieve long-term results, but it must be taken into account that there are many myths in the treatment of obesity that current evidence is dismantling with new data — and this is one of them.

Secondly, the effect of the very-low-calorie ketogenic diet can be added to other treatments. This has been demonstrated by studies carried out with liraglutide that showed that this dietary strategy optimizes results, compared with patients who had been treated only with this drug. The third point that justifies the use of the very-low-calorie ketogenic diet is the management of obesity comorbidities. Several investigations demonstrate the effectiveness of this diet in this regard, especially in the case of type 2 diabetes. Data suggest that the substantial weight reductions achieved with it also favor the remission of these comorbidities in many patients.

Busetto pointed out that, based on this evidence, the OMTF proposed the development of standards to be included in the EASO guidelines, since there had been no specific recommendation on the very-low-calorie ketogenic diet.

“The main objective of these European guidelines was to provide data referenced by scientific evidence and to suggest a common protocol for the use of this dietary strategy,” he added.

For this, a very exhaustive meta-analysis was carried out, researching all the publications that compared the very-low-calorie ketogenic diet with other diets. The results showed the superiority of the former method for the reduction of BMI and weight and fat mass, with no difference in lean (muscle) mass, despite significant weight loss in these patients.

This evidence also demonstrates a reduction and an improvement in metabolic markers, specifically glucose metabolism and lipid metabolism.

“The final conclusions of the study corroborate that the very-low-calorie ketogenic diet can be recommended as an effective and safe tool for people with obesity, especially those with severe obesity or comorbidities (joint disease, preoperative period to bariatric surgery, metabolic and cardiovascular diseases) who need immediate, substantial weight loss. In addition, it can be prescribed to specific groups of patients with obesity after considering potential contraindications and under medical follow-up,” said Busetto.

In Busetto’s opinion, it would be convenient to refer to this approach as a method, instead of as a diet, “because, in reality, the state of ketosis is limited in time, and if the ketogenic phase is stopped without a continuity plan, obviously weight is regained. In addition, the method approach may increase adherence by patients.”

Finally, Busetto emphasized the importance of integrating this type of treatment into a long-term lifestyle strategy (including habits, exercise, and nutritional advice). “We must start from the basis that obesity is a chronic and relapsing disease, whose management should also be chronic and probably maintained throughout life.”

This article has been translated from Medscape Spanish Edition.