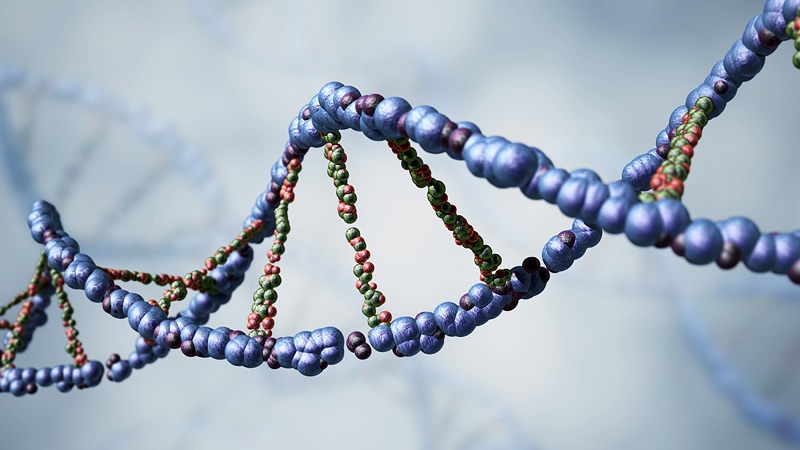 People with obesity who have inherited “lucky genes” for a favorable distribution of body fat had a lower risk of 11 diseases related to the metabolic effects of fat compared with people who had inherited “unlucky genes,” in a large new genetic study.

That is, people with unfavorable adiposity gene variants had fat stored under the skin throughout the body, but they also had more ectopic fat (fat in the “wrong place”) surrounding the pancreas and liver, which is associated with a higher risk of metabolic diseases such as heart disease and type 2 diabetes.

In contrast, people with favorable adiposity gene variants had more subcutaneous fat (such as a paunch or a double chin).

The study by Susan Martin, PhD, a postdoctoral research associate at the University of Exeter, UK, and colleagues, was recently published in eLife.

“Some people have ‘unlucky fat genes,’ meaning they store higher levels of fat everywhere, including under the skin [and around the] liver and pancreas. That’s associated with a higher risk of diseases such as type 2 diabetes,” senior author Hanieh Yaghootkar, MD, PhD, summarized in a press release from the University of Exeter.

“Others are luckier and have genes that mean higher fat under the skin but lower liver fat and a lower risk of diseases like type 2 diabetes,” added Yaghootkar, from Brunel University London, UK.

On the other hand, excess weight itself (such as a heavy load on the joints) rather than a metabolic effect is associated with nine other obesity-related diseases: osteoarthritis, rheumatoid arthritis, osteoporosis, gastro-esophageal reflux disease, gallstones, adult-onset asthma, psoriasis, deep vein thrombosis, and venous thromboembolism.

Good Genes No Substitute for a Healthy Lifestyle

“People with more favorable adiposity gene variants are still at risk of the nine diseases” that are not caused by metabolic effects — such as osteoarthritis — but are caused by the effect of excess weight on the joints, another  author, Timothy M. Frayling, PhD, stressed.

“People with obesity and unfavorable adiposity gene variants are at higher risk of all 20 diseases because they have the double hit of the excess mechanical effects and the adverse metabolic effects,” Frayling, University of Exeter, told Medscape Medical News in an email.

The main clinical message, he said, is that “this research helps inform which conditions may respond better to therapies that lower the adverse effects” of risk factors such as high cholesterol and blood glucose levels, “and high blood pressure, even with no weight loss.”

“In contrast, other conditions really require the weight loss.”

“These results emphasize that many people in the community who are of higher body mass index (BMI) are at risk of multiple chronic conditions that can severely impair their quality of life or cause morbidity or mortality, even if their metabolic parameters appear relatively normal,” the researchers conclude.

“Whilst it’s important that we identify the causes of obesity-related disease, good genes [are] still no substitute for a healthy lifestyle,” Martin stressed.

“A favorable adiposity will only go so far. If you’re obese, the advice is to still try and shift the excess weight where you can,” she said.

“This is an important topic and can help us better understand how overweight influences risk of several important outcomes.”

The researchers aimed to investigate the effects of adiposity on metabolic and nonmetabolic diseases caused by obesity.

The study was funded by Diabetes UK, the UK Medical Research Council, the World Cancer Research Fund, and the National Cancer Institute. Author disclosures are listed with the article.