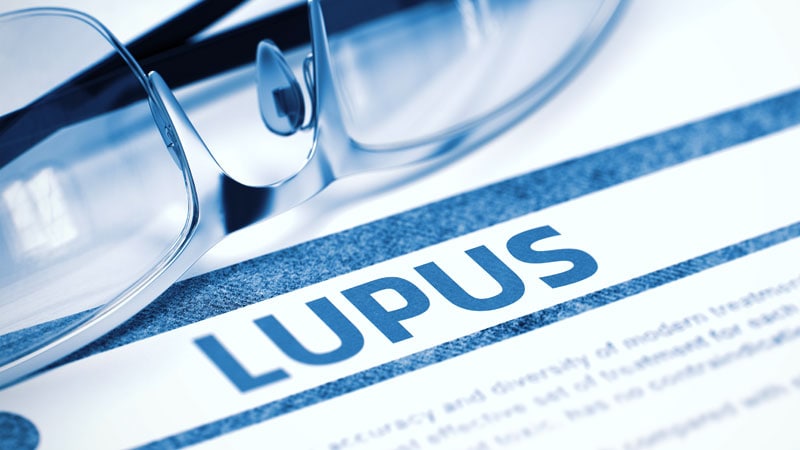 Women with systemic lupus erythematosus (SLE) experience worse outcomes after an acute stroke than does the general population, but men with SLE do not, according to an analysis of the U.S. National Inpatient Sample presented at the annual meeting of the British Society for Rheumatology.

In a study of more than 1.5 million cases of acute stroke recorded in the United States between 2015 and 2018, women with SLE were more likely to be hospitalized for longer and less likely to be routinely discharged into their home environment than were those without SLE. No such association was found for men with SLE.

“The findings imply that primary stroke prevention is of utmost importance, especially in females with SLE,” said Sona Jesenakova, a fourth-year medical student at the University of Aberdeen (Scotland).

“There might be a need to explore more effective and targeted treatment strategies to try and minimize these excessive adverse acute stroke outcomes, especially in females with SLE suffering from stroke,” she suggested.

“Even though males form only a minority of the SLE patient population, some studies have shown that they are prone to suffer from worse disease outcomes,” Jesenakova said.

Importantly, “male sex has been identified as a risk factor for death early in the course of SLE,” she added, highlighting that sex differences do seem to exist in SLE.

Stroke is an important outcome to look at because people with SLE are known to be at higher risk for developing atherosclerosis, which is a widely known risk factor for ischemic stroke, and with antiphospholipid antibody positivity and uncontrolled disease activity, that risk can be increased. A meta-analysis of older studies has suggested that the risk for death after a stroke is 68% higher in people with SLE than in those without.

To examine the risk for death and other in-hospital outcomes in a more contemporary population, Jesenakova and associates used data from the National Inpatient Sample, a large, publicly available database that contains inpatient health care information from across the United States. Their sample population consisted of 1,581,430 individuals who had been hospitalized for stroke. Of these, there were 6,100 women and 940 men who had SLE; the remainder served as the ‘no-SLE’ control population.

The researchers analyzed three key outcomes: mortality at discharge, hospitalization prolonged to a stay of more than 4 days, and routine home discharge, meaning that the patient was able to be discharged home versus more specialist facilities such as a nursing home.

They conducted a multivariate analysis with adjustments made for potential confounding factors such as age, ethnicity, type of stroke, and revascularization treatment. Comorbidities, including major cardiovascular disease, were also accounted for.

Women with SLE were 20% more likely to have a prolonged hospital stay and 28% less likely to have a routine home discharge, compared with patients who did not have SLE. The 95% confidence intervals were statistically significant, which was not seen when comparing the same outcomes in men with SLE (odds ratios of 1.06 and 1.18, respectively).

“As for males, even though we didn’t find anything of statistical significance, we have to bear in mind that the sample we had was quite small, and thus these results need to be interpreted with caution,” Jesenakova said. “We also think that we identified a gap in the current knowledge, and as such, further research is needed to help us understand the influence of male sex on acute stroke outcomes in patients with comorbid SLE.”

The researchers performed a secondary analysis looking at the use of revascularization treatments for ischemic stroke and found that there were no differences between individuals with and without SLE. This analysis considered the use of intravenous thrombolysis and endovascular thrombectomy in just over 1.4 million cases but did not look at sex-specific differences.

Jesenakova had no conflicts of interest to disclose.