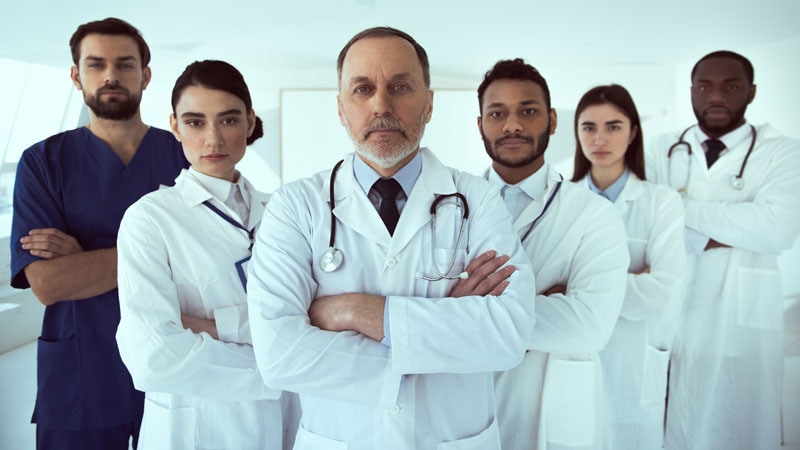 Increasing mentorship opportunities for gastroenterology and hepatology residents and medical students from populations underrepresented in medicine is essential to increase diversity in the specialty and improve health disparities among patients, according to a special report published simultaneously in Gastroenterology and three other journals.

“This study helps to establish priorities for diversity, equity and inclusion in our field and informs future interventions to improve workforce diversity and eliminate health care disparities among the patients we serve,” Folasade P. May, MD, PhD, MPhil, the study’s corresponding author and an associate professor of medicine at the University of California, Los Angeles, said in a prepared statement.

“The current racial and ethnic composition of the GI and hepatology workforce does not reflect the population of patients served or the current matriculants in medicine,” Harman K. Rahal, MD, of UCLA and Cedars-Sinai Medical Center, Los Angeles, and James H. Tabibian, MD, PhD, of UCLA and Olive View–UCLA Medical Center, and colleagues wrote. “As there are several conditions in GI and hepatology with disparities in incidence, treatment, and outcomes, representation of UIM [underrepresented in medicine] individuals is critical to address health disparities.”

The term “underrepresented in medicine” is defined by the Association of American Medical Colleges as “those racial and ethnic populations that are underrepresented in the medical profession relative to their numbers in the general population.” The authors explained that these groups “have traditionally included Latino (i.e., Latino/a/x), Black (or African American), Native American (namely, American Indian, Alaska Native, and Native Hawaiian), Pacific Islander, and mainland Puerto Rican individuals.”

The five gastroenterology and hepatology societies partnered with investigators at UCLA to develop a 33-question electronic survey “to determine perspectives of current racial, ethnic, and gender diversity within GI and hepatology; to assess current views on interventions needed to increase racial, ethnic, and gender diversity in the field; and to collect data on the experiences of UIM individuals and women in our field,” according to the report’s authors. The survey was then distributed to members of those societies, with 1,219 respondents.

The report found that inadequate representation of people from those underrepresented groups in the education and training pipeline was the most frequently reported barrier to improving racial and ethnic diversity in the field (35.4%), followed by insufficient racial and ethnic minority group representation in professional leadership (27.9%) and insufficient racial and ethnic minority group representation among practicing GI and hepatology professionals in the workplace (26.6%). Only 9% of fellows in GI and hepatology are from groups underrepresented in medicine, according to data from the Accreditation Council for Graduate Medical Education. Furthermore, one study has shown that the proportion of UIM in academic faculty has never exceeded 10% at each academic rank; there has even been a decline recently among junior academic faculty positions. That study also found that only 9% of academic gastroenterologists in the United states identify as underrepresented in medicine, with little change over the last decade.

Potential contributors to this low level of representation, the authors wrote, include “lack of racial and ethnic diversity in the medical training pipeline, nondiverse leadership, bias, racial discrimination, and the notion that UIM physicians may be less likely to promote themselves or be promoted.”

Another potential contributor, however, may be complacency within the field about the need to improve diversity and taking actions to do so.

A majority of White physicians (78%) were very or somewhat satisfied with current levels of workforce diversity, compared with a majority of Black physicians (63%) feeling very or somewhat unsatisfied. Only 35% of respondents felt there is “insufficient racial and ethnic representation in education and training,” and just over a quarter (28%) felt the same about representation in leadership. In fact, most respondents (59.7%) thought that racial and ethnic diversity had increased over the past 5 years even though data show no change, the authors noted.

Again, however, the majority of the respondents (64.6%) were themselves not members of underrepresented groups. Nearly half the respondents (48.7%) were non-Hispanic White, and one in five (22.5%) were Asian, Native Hawaiian, or Pacific Islander. The remaining respondents, making up less than a third of the total, were Hispanic (10.6%), Black (9.1%), American Indian or Alaskan Native (0.2%), another race/ethnicity (3.3%), or preferred not to answer (5.7%).

Studies on provider-patient concordance have shown that patients feel it’s important to share common ground with their physicians particularly in terms of race, ethnicity and language, the authors noted.

“This patient preference underscores the need to recruit and train a more diverse cohort of trainees into GI and hepatology fellowships if the desired goal is to optimize patient care and combat health disparities,” they wrote. They pointed out that cultural understanding can influence how patients perceive their health, symptoms, and concerns, which can then affect providers’ diagnostic accuracy and treatment recommendations. In turn, patients may have better adherence to treatment recommendations when they share a similar background as their clinician.

The top recommendations from respondents for improving representation of currently underrepresented individuals in GI and hepatology were to increase mentorship opportunities for residents (45%) and medical students (43%) from these groups and to increase representation of professionals from these backgrounds in program and professional society leadership (39%). A third of respondents also recommended increasing shadowing opportunities for undergraduate students from these underrepresented populations.

Increasing mentorship opportunities was also the top suggestion, cited by more than half of respondents (56%), for improving healthy equity and addressing health disparities within the GI and hepatology professions. Other top recommendations included increasing STEM programs for underrepresented undergraduate and medical students, increasing diversity within medical society leadership, and advocating for national and local policies that increase health care access and delivery to underrepresented populations.

The research was funded by the National Cancer Institute, the UCLA Jonsson Comprehensive Cancer Center, and Eli and Edythe Broad Center of Regenerative Medicine and Stem Cell Research Ablon Scholars Program. The authors reported no conflicts of interest.