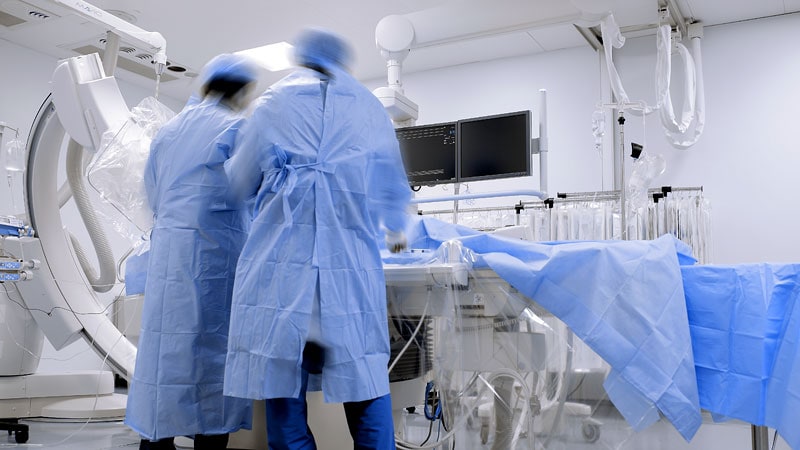 Provocation testing with intracoronary acetylcholine is safe, particularly among Western patients, suggests a large systematic review that underscores the importance of functional coronary angiography to diagnose epicardial or microvascular spasm.

Ventricular tachycardia/fibrillation were the most common events and mainly reported from two Japanese studies. There were no deaths.

The pooled positive vasospasm rate was also lower in Western vs Asian studies (37.9% vs 50.7%; P for between-group heterogeneity = .010), as reported by the Microvascular Network in the Journal of the American College of Cardiology.

“If you look at the data between Asian studies versus others, mainly European or US studies, primarily in Caucasian populations, it’s like zero percent history of major complications. So, it sounds extremely safe to do this testing in Caucasian populations,” Yuhei Kobayashi, MD, NewYork-Presbyterian Brooklyn Methodist Hospital, Weill Cornell Medicine, New York City, said.

Safety will need to be assessed in African Americans and other racial/ethnic groups but “it makes us think we should end up testing more in the United States,” he told theheart.org | Medscape Cardiology.

Intracoronary acetylcholine testing is daily practice in Japan but is limited in the US and Europe to a few specialized centers due to safety concerns. Three deaths were reported in 1980 with intravenous ergonovine testing, whereas the safety of acetylcholine protocols has been studied largely in single-center retrospective studies, typically in Asian populations.

“More and more institutions in Europe and the US are starting to do acetylcholine testing because now we know that chest pain isn’t necessarily coming from the blocked arteries,” Kobayashi said. “There are functional abnormalities, including coronary spasm, and if we diagnose it, we have appropriate medical regimens for this kind of disease.”

The present review and meta-analysis included 12,585 participants in 16 studies through November 2021. Of these, 63% were conducted in Western countries and most were prospective studies published over the past decade in patients with MINOCA or INOCA.

Ten studies used the contemporary diagnostic criteria for epicardial spasm of at least 90% reduction in coronary diameter. Acetylcholine was administered into the left coronary artery at up to 100 mcg and 200 mcg in seven and six studies, respectively, and was used in the other three studies to assess endothelial function with a slower infusion of up to 36.4 mcg.

Major complications were significantly higher in studies following the contemporary diagnostic cutoff than in those using a lower cutoff of at least 75% diameter reduction (1.0% vs 0.0%; P for between-group heterogeneity < .001).

Minor complications occurred in 3.3% of patients but were not detailed. They can include paroxysmal atrial fibrillation, ventricular ectopic beats, transient hypotension, and bradycardia requiring intervention.

Kobayashi suggested that several factors may explain the racial differences, including previously reported smooth muscle hyperresponsiveness to provocation stimuli in Japanese patients and the inclusion of a wide range of patients in Japanese studies, such as those with obstructive coronary disease.

Japanese studies also used sequential acetylcholine injection into both the right and left coronaries, a faster injection speed of 20 seconds, and upfront placement of a temporary pacing catheter in case of acetylcholine-induced bradycardia, particularly with right coronary injection.

Although the protocol is largely settled in Japan, he said, provocation protocols need to be standardized because “depending on the country and depending on the institution, people are doing totally different things.”

Commenting on the study, C. Noel Bairey Merz, MD, from Cedars Sinai, Los Angeles, California, said it has “widespread relevance” because half of all coronary angiograms done invasively in the US for suspected ischemia find no obstructive coronary disease. Left untreated, however, MINOCA has a 2.5% annual event rate and a quarter of that is death.

“This is a big step forward with likely equal opportunity to improve women and men’s ischemic heart disease,” she said.

On the other hand, all studies were conducted at centers of excellence, so safety will need to be carefully watched as testing rolls out to more community care, Merz said. “And it always needs to be underscored that this is done by an interventional cardiologist because they’re familiar with wires that can dissect arteries and they’re familiar with minor complications that could turn into major, if someone didn’t act appropriately.”

Merz also called for unifying protocols and the need to raise awareness within the general cardiology community to ask interventionalists for acetylcholine spasm testing. Randomized controlled data from within the WISE study and the CorMica study showed that diagnostic certainty leads to greater therapeutic certainty. “You do a much better job about who and how to treat,” she said.

“So in addition to this publication being guideline-forming for diagnosis, we anticipate in the next several years to have clinical trial evidence about therapeutics, again, for formulation of class 1 guidelines,” Merz said.

Interventionalists are quite happy to do fractional flow reserve using intravenous adenosine to assess coronary microvascular dysfunction, he said, and “what we think is that functional angiography should test both — both the spasm as well as the microvasculature — and that will give us a clear direction because the treatments are slightly different when you’re treating the large arteries as compared to the microscopic arteries. It’s an important thing.”

Beltrame and colleagues further detail the benefits of comprehensive invasive functional angiography over structural angiography in a related editorial.

He also noted that the Coronary Vasomotion Disorders International Study Group published international diagnostic criteria for microvascular angina and that several protocols for acetylcholine spasm testing are in the works, including one from Australia. Australian investigators are also organizing an accreditation program for those performing the test.

“The protocol itself is relatively straightforward, but it’s not merely picking up a manual and following the instructions,” Beltrame said. “Just the same as when you train someone in angioplasty, you don’t just go out and do it. You need to develop some experience in it and so should be proctored.”

Kobayashi reported consulting agreements with Abbott Vascular. Coauthor disclosures are listed in the paper. Beltrame and colleagues have disclosed no relevant financial relationships.