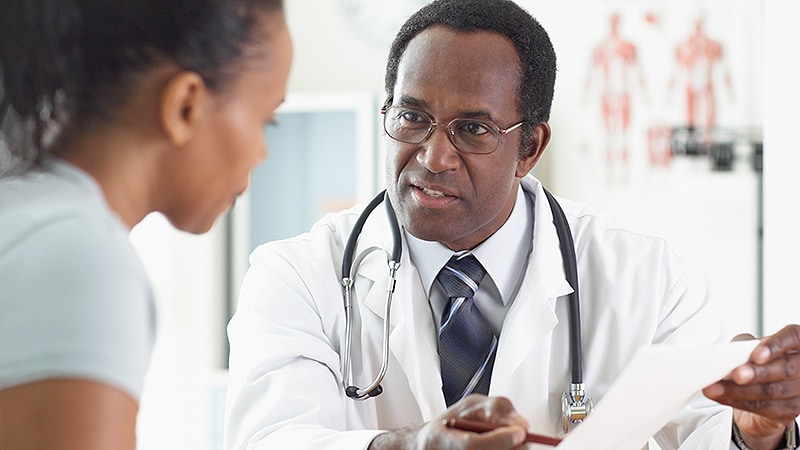 For many people, going to the doctor for a routine checkup is nothing out of the ordinary. But for others, doctor visits can trigger feelings of fear and anxiousness — something that is more common among members of minority communities, or those who have sensitive, or seemingly embarrassing, topics to discuss, according to a new WebMD poll.

If you fall into one of these categories, you are not alone. We share ways to talk about sensitive issues with your doctor.

There are often specific health issues that people of color face, varying by race. For example, half of Hispanic men and around 40% of Hispanic women in the U.S. have high blood pressure, according to the American Heart Association.

This could be due to language barriers at the doctor’s office, living in communities with little access to healthy food options, or the cost of health care.

But what if you want to talk to your doctor about race-related health concerns?

A new WebMD poll found that Blacks (18%) were significantly less comfortable talking about race with doctors than Hispanics (5%) or whites (5%). This is problematic, as there are health issues that the Black community, specifically, faces on a larger scale, such as sickle cell disease.

Sickle cell disease is a blood disorder that is inherited. It can cause pain, swelling in your feet and hands, and constant infections. There are about 100,000 people with sickle cell disease in the U.S., the majority being Black.

While some may feel more comfortable seeing a doctor of the same race, that is not a reality for everyone.

David L. Hill, MD, a hospitalist pediatrician at Goldsboro Pediatrics in North Carolina, says that as a Spanish speaker, many of his Hispanic clients feel as though their needs may not be fully understood elsewhere.

There are many cases of minorities who have had bad experiences at a doctor’s office, even keeping quiet about their concerns out of fear of not truly being understood, says Jennifer Lincoln, MD, a practicing OB hospitalist in Portland, OR.

In June, Lincoln posted a viral video on TikTok addressing myths that Blacks do not feel pain in the same way as whites. These types of biases have harmful effects, such as the disproportionately high rate of complications in pregnancy and delivery among Black women, which can also result in pregnancy-related deaths.

“I have had many stories shared with me about times when patients felt they couldn’t bring that up with their OB/GYN or midwife for fear of being misunderstood or labeled a ‘difficult patient,'” Lincoln says.

Hill says that he rarely hears these types of cases, which is even more worrisome.

“In one case, say a Black family had an upsetting experience with one of my white colleagues,” says Hill, who is also an author. “They may not trust me, another white doctor, to see their side of the story and so may not share. If, on the other hand, a white family was unhappy with care they received from a non-white colleague, they may also be wary of sharing their unhappiness for fear of being judged racist.”

Tips for Discussing Race-Related Issues With Your Doctor

“I recommend putting your concerns out there from the very beginning,” Lincoln says. “Because that way, you can assess your doctor’s response and see if they get it. And if not, you know and can move on without having invested too much time.”

One way to do this is by simply being direct, Hill says. Many doctors are eager to understand the needs of their patients, including cultural considerations.

“I would encourage families who feel their providers are neglecting important cultural facts to speak up,” Hill says. “‘That’s not going to work for us,’ or, ‘I think you don’t quite understand what I’m saying,’ are great conversation starters that would certainly put me in a listening mode.”

But also remember that doctors are human.

“Doctors today should all be trained in active listening, motivational interviewing, and cultural competency,” Hill says. “That doesn’t mean we all get every patient encounter right. It’s human for us as clinicians to get defensive or frustrated if we feel we’ve developed a good plan and the family doesn’t agree. As a patient, the natural reaction to such defensiveness would be to reflect that frustration and perhaps to escalate into conflict. I’d encourage both parties to take a breath and remember that we’re all here to achieve a desired health and developmental outcome.”

Don’t Be Afraid to Move On

“I don’t want patients to have to carry the burden of teaching their doctors about racism,” Lincoln says. “Moving on from an office that doesn’t get it is not only acceptable, but I also recommend it, because there are plenty of good health care providers out there who are ready to give you the care you deserve.”

Discussing sexual orientation can also be a source of discomfort for some, specifically in the LGBTQ community, often out of fear of being stigmatized or discriminated against. It is particularly critical to discuss sexual orientation with a doctor in order to get needed medical treatment, including preventive screenings and discussions of the risk of STDs, according to the CDC.

There also seems to be racial differences in these discussions. The WebMD poll results show that 83% of Hispanics had never discussed sexual orientation with a doctor, as did 78% of Blacks and 66% of whites.

Kristie Overstreet, PhD, a psychotherapist and creator of The Dignity Model, says that negative experiences when discussing sexual orientation with a doctor are common, especially when a doctor asks about a patient’s partners or sexual health concerns.

It’s also important to keep in mind that a doctor needs to know a little bit about your history and background to answer questions you may have, she says. But if it seems as though they are asking questions based solely on their curiosity or personal interest, you should not feel pressure to answer.

Tips for Discussing Sexual Orientation With Your Doctor

“Remember that your physician is there to serve you,” Overstreet says. “You are the consumer, the patient, the person that is giving them a job to do. You play a big role in the interaction with your physician by how you show up.”

“Have your questions ready ahead of time or a list of things you want to discuss so you feel more prepared at the time of your appointment,” Overstreet suggests.

“Your sexual orientation does not exclude you from the equal, respectful, and dignity health care you deserve,” Overstreet says. “Do your homework ahead of time, and try to identify if the physician or practice is LGBTQIA+ affirming. This will help you feel more relaxed if they have had training and provide affirming care.”

“Talk with a supportive friend, therapist, or loved one about your experience, especially if it was upsetting,” Overstreet says. “You don’t have to go through it alone. Many practices have a reporting process in place if you feel you’ve been mistreated. Look in your new client paperwork or ask the front desk about next steps if you choose to move forward with reporting your experience.”

Sexual health topics can also be particularly uncomfortable, specifically questions such as, “Are you sexually active?” or “How many sexual partners have you had?” It can be especially anxiety-producing if you want to talk to your doctor about a specific issue, like if a patient is concerned they may have contracted a sexually transmitted disease (STD).

This is particularly true for young people: A study in BMC Public Health showed that people ages 16 to 24 felt much more comfortable using an STD self-testing device over seeing a doctor in person, such as to avoid seemingly embarrassing in-person communication or judgment.

Uncomfortable interactions happen quite often, such as a doctor being dismissive when a patient raises sexual health concerns, or even making judgmental comments such as, “This is what happens when you have multiple partners,” Overstreet says.

Tips for Discussing Sexual Health With Your Doctor

“Don’t give any weight to the question or make it mean more than it does,” Overstreet suggests. “Remember that you are one of many patients they see in a day, and they are not thinking about you or your sex life, much less spending time judging you.”

“You don’t think twice about going to the doctor for cold-like symptoms, and these are spread amongst people interacting,” Overstreet says. “Just because an STD may be transmitted by interaction, shame accompanies it because of how our society views the taboo nature of sex. We aren’t supposed to talk about it, much less do it. The idea that someone who has an STD is dirty, sleeps with many people, and now they are contagious are all myths that aren’t true. Take some of the weight out of the possible diagnosis, and don’t let it mean more than it has to.”

“Your physician might not have asked about sexual health, but don’t miss the opportunity to address your issue,” Overstreet says. “Don’t be afraid to ask them any question about yourself; that’s what they are there for. Your anticipatory anxiety about the discussion may make you more nervous, which could cause you to shut down and not get your questions asked.”

While discussing sensitive topics with your doctor might feel uncomfortable, or even a little scary, it’s still important to do so. Use these tips or research other techniques to help you speak freely with your doctor about any health concerns you may have.

BuzzFeed News: “A Viral TikTok is Sparking a Conversation About Racial Bias Against Black People in Healthcare.”