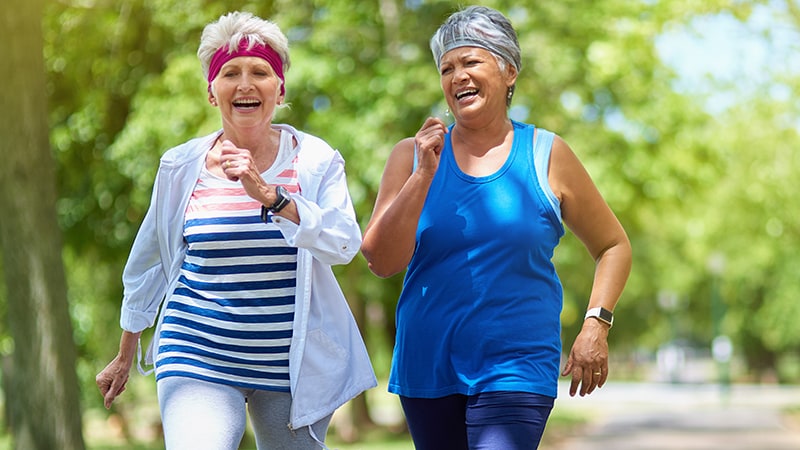 More steps per day, particularly at a higher intensity, may reduce the risk of type 2 diabetes in older women, based on a prospective cohort study.

The link between daily stepping and diabetes was not significantly modified by body mass index (BMI) or other common diabetes risk factors, suggesting that the relationship is highly generalizable, lead author Alexis C. Garduno, MPH, a PhD student at the University of California, San Diego, and colleagues reported.

“Physical activity is a key modifiable behavior for diabetes prevention and management,” the investigators wrote in Diabetes Care. “Many prevention studies have demonstrated that regular physical activity, along with improved diet, reduces the risk of diabetes in adults. … To the best of our knowledge, there are few studies examining the association between objectively measured steps per day and incident diabetes in a community-based setting.”

To this end, the investigators analyzed data from 4,838 older, community-living women in the Objective Physical Activity and Cardiovascular Health Study. Upon enrollment, women were without physician-diagnosed diabetes and had a mean age of 78.9 years. For 1 week, participants wore ActiGraph GT3X+ accelerometers to measure steps per day, as well as step intensity, graded as light or moderate to vigorous.

The relationship between daily activity and diabetes was analyzed using three multivariate models: The first included race/ethnicity and age; the second also included family history of diabetes, education, physical functioning, self-rated health, smoking status, and alcohol consumption; and the third added BMI, “a potential mediator in the causal pathway between steps per day and diabetes,” the investigators wrote.

Participants took an average of 3,729 steps per day, divided roughly evenly between light and moderate to vigorous intensity.

The final model, which added BMI, showed a 10% reduction in risk, although it didn’t reach statistical significance (HR, 0.90; 95% CI, 0.80-1.02; P = .11). Furthermore, accelerated failure time models suggested that BMI did not significantly impact the link between steps and diabetes (proportion mediated, 17.7%;95% CI, –55.0 to 142.0; P = .09). Further analyses also found no significant interactions between BMI or other possible confounders.

“The steps per day–diabetes association was not modified by age, race/ethnicity, BMI, physical functioning, or family history of diabetes, which supports the generalizability of these ﬁndings to community-living older women,” the investigators wrote.

“This study provides evidence supporting an association between steps per day and lower incident diabetes,” the investigators concluded. “While further work is needed to identify whether there is a minimum number of steps per day that results in a clinically significant reduction of diabetes and to evaluate the role that step intensity plays in diabetes etiology for older adults, ﬁndings from this study suggest that moderate-vigorous–intensity steps may be more important than lower-intensity steps with respect to incident diabetes. Steps per day–based interventions are needed to advance diabetes prevention science in older adults.”