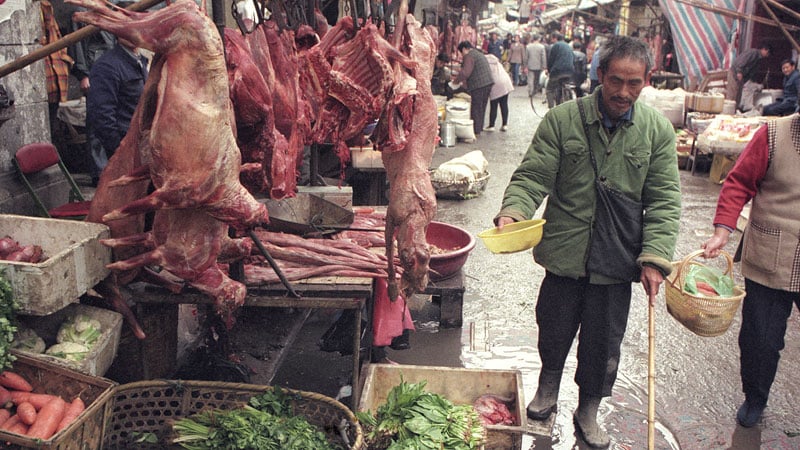 Many scientists and public health experts have long said that the coronavirus that has caused a global pandemic originated in a marketplace in Wuhan, China. Now, two new studies strengthen that argument.

The original spread of the virus was a one-two punch, the studies found. Twice, the virus jumped from animals to humans. Virus genetics and outbreak modeling in one study revealed two strains released a few weeks apart in November and December 2019.

“Now I realize it sounds like I just said that a once-in-a-generation event happened twice in short succession, and pandemics are indeed rare,” Joel O. Wertheim, PhD, said at a briefing sponsored by the American Association for the Advancement of Science.

A unique storm of factors had to be present for the outbreak to blow up into a pandemic: Animals carrying a virus that could spread to humans, close human contact with these animals, and a city large enough for the infection to take off before it could be contained are examples.

Unluckily for us humans, this coronavirus — SARS-CoV-2 — is a “generalist virus” capable of infecting many animals, including humans.

“Once all the conditions are in place…the barriers to spillover have been lowered,” said Wertheim, a researcher in genetic and molecular networks at the University of California San Diego. In fact, beyond the two strains of the virus that took hold, there were likely up to two dozen more times where people got the virus but did not spread it far and wide, and it died out.

Overall, the odds were against the virus — 78% of the time, the “introduction” to humans was likely to go extinct, the study showed.

“Our model shows that there were likely only a few dozen infections, and only several hospitalizations due to COVID-19, by early December,” said Jonathan Pekar, a graduate student working with Wertheim.

In Wuhan in late 2019, Pekar said, there was not a single positive coronavirus sample from thousands of samples from healthy blood donors tested between September and December. Likewise, not one blood sample from patients hospitalized with flu-like illness from October to December 2019 tested positive for SARS-CoV-2.

A second study published in the journal Science mapped out the earliest COVID-19 cases. This effort showed a tight cluster around the wholesale seafood market inside Wuhan, a city of 11 million residents.

When researchers tried other scenarios — modeling outbreaks in other parts of the city — the pattern did not hold. Again, the Wuhan market appeared to be ground zero for the start of the pandemic.

Michael Worobey, PhD, and colleagues used data from Chinese scientists and the World Health Organization for the study.

“There was this extraordinary pattern where the highest density of cases was both extremely near to and very centered on this market,” said Worobey, head of ecology and evolutionary biology at the University of Arizona in Tucson.

The highest density of cases, in a city of 8000 square kilometers, was a “very, very small area of about a third of a kilometer square,” he said.

The outbreak pattern showed the Wuhan market “smack dab in the middle.”

So if it started with infected workers at the market, how did it spread from there? It’s likely the virus got into the community as the vendors at the market went to local shops, infecting people in those stores. Then local community members not linked to the market started getting the virus, Worobey said.

The investigators also identified which stalls in the market were most likely involved, a sort of internal clustering. “That clustering is very, very specifically in the parts of the market where…they were selling wildlife, including, for example, raccoon dogs and other animals that we know are susceptible to infection with SARS-CoV-2,” said Kristian Andersen, PhD, director, infectious disease genomics, Scripps Research Translational Institute, La Jolla, California.

What remains unknown is which animal or animals carried the virus, although the raccoon dog — an animal similar to a fox that is native to parts of Asia — remains central to most theories. In addition, many of the farms supplying animals to the market have since been closed, making it challenging for researchers to figure out exactly where infected animals came from.

“We don’t know necessarily, but raccoon dogs were sold at this market all the way up to the beginning of the pandemic,” Andersen said.

Not Ruling Out Other Theories

People who believe SARS-CoV-2 was released from a laboratory in China at first included Worobey himself. “I’ve in the past been much more open to the lab leak idea,” he said. “And published that in a letter in Science” in November 2021.

The letter was “much more influential than I thought it would be in ways that I think it turned out to be quite damaging,” he said. As more evidence emerged since then, Worobey said he came around to the Wuhan market source theory.

Andersen agreed he was more open to the lab-leak theory at first. “I was quite convinced of the lab leak myself until we dove into this very carefully and looked at it much closer,” he said. Newer evidence convinced him “that actually, the data points to this particular market.”

“Have we disproved the lab leak theory? No,” Anderson said. “Will we ever be able to? No.” But the Wuhan market origin scenario is more plausible. “I would say these two papers combined present the strongest evidence of that to date.”

Identifying the source of the outbreak that led to the COVID-19 pandemic is based in science, Andersen said. “What we’re trying to understand is the origin of the pandemic. We’re not trying to place blame.”

“With pandemics being pandemics, they affect all of us,” Andersen said. “We can’t prevent these kinds of events that led to the COVID-19 pandemic. But what we can hope to do is to prevent outbreaks from becoming pandemics.”

Rapid reporting of data and cooperation are needed going forward, Andersen said. Very strong surveillance systems, including wastewater surveillance, could help monitor for SARS-CoV-2, and other pathogens of potential concern in the future as well.

It should be standard practice for medical professionals to be on alert for unusual respiratory infections too, the researchers said.

“It’s a bloody lucky thing that the doctors at the Shinwa hospital were so on the ball, that they noticed that these cases were something unusual at the end of December,” Worobey said. “It didn’t have to work out that way.”

Briefing, American Association for the Advancement of Science, July 26, 2022.

Science: “The Huanan Seafood Wholesale Market in Wuhan was the early epicenter of the COVID-19 pandemic,” “The molecular epidemiology of multiple zoonotic origins of SARS-CoV-2.”