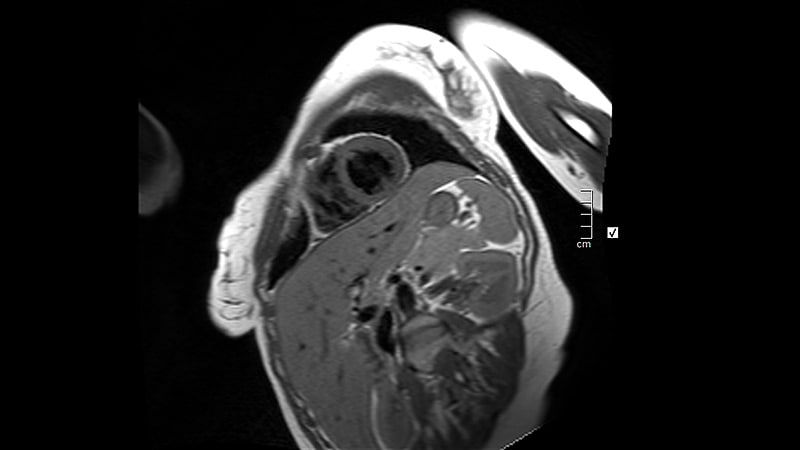 ANAHEIM — A wide range of factors can cause myocarditis; most often viral infections cause myocarditis in children and teens, according to Ryan Butts, MD, medical director of the pediatric advanced cardiac care program at the University of Texas Southwestern Medical Center and Children’s Health of Texas.

Butts provided an overview of what pediatricians and other clinicians caring for children and teens should know about myocarditis at the annual meeting of the American Academy of Pediatrics.

The important new things that attendees may want to take away from this for their practice are improved recognition and diagnostic workup for acute viral myocarditis, making sure cardiology follow-up occurs after an admission for the condition, enhanced evaluation of the child before they return to competitive sports, and the availability of written or verbal education for patients relating to COVID vaccine–associated myocarditis, Butts said.

He also provided a set of key takeaways:

Frank Han, MD, a pediatric cardiologist at OSF Medical Center and Children’s Hospital of Illinois in Peoria, said he found the most helpful parts of Butts’ presentation to be the diagnosis and triage of myocarditis in the major age groups.

“Myocarditis can have variable presentations, and its cause may influence how the myocarditis behaves,” Han said. Pediatric cardiologists, he said, are uniquely positioned to triage and diagnose myocarditis.

Just 0.05% of admissions from 28.6 million U.S. pediatric ED visits every year are for myocarditis, Butts said. While viruses are the most common cause of myocarditis, bacterial infections and noninfectious causes, including hypersensitivity reactions, systemic disorders, and toxic substances, can also cause the condition. The dominant viruses causing myocarditis have shifted over the years as well. Coxsackie B was the most common cause in the 1980s, but adenovirus became more common in the 1990s and parvovirus B19 in the 2000s. Why some kids develop myocarditis while others don’t is unclear, but the host-immune response to the virus likely plays an important role.

Research has shown two substantial spikes in the incidence of myocarditis children: infants under 2 years old and teens aged 14-19. Although myocarditis refers to any inflammation of myocardium not caused by ischemia, the signs, symptoms, and lab results vary according to patient’s age group. The only constant is that diaphoresis is rare across all ages.

Infants are more likely to show respiratory distress (68%) and an enlarged liver (40%) but can also present with gastrointestinal symptoms (24%). Vomiting without fever or diarrhea should arouse clinical suspicion of myocarditis in infants, although fever and diarrhea can occur.

In young children, who have the lowest incidence, fatigue presents in about one-third, with 20% presenting with chest pain and 20% with hepatomegaly. The most common symptom in teens by far (80%) is chest pain. About one-third also have respiratory distress but gastrointestinal symptoms are less common (20%).

When should a clinician suspect myocarditis in a teen presenting with chest pain? “If the chest pain is reproducible and if you can localize it, they don’t need further evaluation,” Butts said. “After that, it’s a lot about the history.”

Cardiac MRI increasingly has been replacing endomyocardial biopsy for diagnosis, with MRI exceeding biopsy use between 2009 and 2010, Butts said. The advantage of endomyocardial biopsy is that it’s specific, if not very sensitive. The test is invasive, however, requiring sedation and carrying the risk of tricuspid injury. The most common finding on cardiac MRI is late gadolinium enhancement (80%) while early gadolinium enhancement is less common (55%).

Although Butts mentioned the Dallas diagnostic criteria from 1987, he advocated for the more recent Lake Louise Criteria, which require clinical suspicion of myocarditis and at least two of three findings on MRI: T2-weighted myocardial abnormalities, T1 early or late gadolinium enhancement, or regional wall motion abnormalities or evidence of pericarditis

Learning the etiology of viral myocarditis often is difficult, and etiology doesn’t affect management of the condition, Butts said. Even in cases of myocarditis confirmed by biopsy, the virus may be identified in only about 60%-70% of cases with myocardial polymerase chain reaction. In clinical cases, the virus can be determined only about 25%-30% of the time with serum PCR.

Prognosis is usually good, with 80%-90% of children and teens going home transplant free despite most arriving critically ill and 50%-80% initially being admitted to ICU. Two-thirds of those discharged go home with heart failure medications, but only one in six are readmitted within a year.

The strongest risk factors for poor prognosis are younger age and being critically ill at presentation but other risk factors include female sex, poor ventricular function, poor perfusion on exam, increased dilation on echocardiogram, and a need for ECMO or inotropes or mechanical ventilation.

That said, Butts cautioned attendees not to ignore normal function. In one study of 171 patients, among 75 who presented with normal function, 15% went home with inotropes, 12% required mechanical ventilation, 9% had arrhythmia, and 5% needed extracorporeal membrane oxygenation.

A big question in treatment is whether to give IVIG or not and the evidence is murky, Butts said. He reviewed a couple studies on IVIG, including one that suggested better ventricular functional recovery with the treatment but those who received IVIG were also more likely to be on an ACE inhibitor.

“Was it the ACE inhibitor or was it IVIG? We don’t know,” he said. Different cardiologists may give different opinions on IVIG. “It has nothing to do with the actual evidence behind it.”

IVIG has drawbacks: It’s very expensive and it involves risks that include serum sickness and interstitial nephritis.

“Pediatricians typically aren’t going to directly decide on giving or not giving IVIG,” Han said. “Typically, the ultimate choice comes from a group discussion between the hospital cardiologist — perhaps the hospitalist pediatrician if they are involved — and the family. We acknowledge the ambiguity of the evidence and decide based upon the severity of the initial disease process.”

Experts are much more confident, however, about when teens admitted with viral myocarditis can return to competitive sports. But Butts said he suspects the guidelines for these children aren’t followed as closely as they should be. The American Heart Association recommends waiting 6 months after discharge and ensuring the athlete has a normal echocardiogram, Holter monitoring, and stress test.

“It’s incredibly important to have them come back and see the cardiologist 6 months after admission,” Butts said. “The only patient I’ve ever had who died 6-7 months post myocarditis is somebody who, during their stress test, had increasing ventricular ectopy. I told him not to do sports. He didn’t listen to me and unfortunately passed away — I’m assuming from arrhythmia.”

Butts also noted a Morbidity and Mortality Weekly Report from the Centers of Disease Control and Prevention that found teen boys had two to six times greater risk of heart complications after COVID-19 infection than after COVID vaccination.

The bottom line, Butts said, is that cardiac involvement in MIS-C is common, but typically improves by discharge. “Vaccine-associated myocarditis is a mild clinical syndrome that has a very short duration, and, in my opinion, should never lead us to ever advise anybody not to get the vaccine. I’ve had many patients, even patients in their first year post transplant, who have gotten the COVID-19 vaccine and were just fine.”

Butts acknowledged that talking with families about the risk of myocarditis with the vaccine is challenging. He often starts these conversations by sharing the statistics, but he said relatable stories are the key. He will also relate the statistics to something the parents and teen will understand, whether it’s sports or another comparison. He does recommend that teens who develop vaccine-associated myocarditis complete the series and get the booster. Their chances of developing myocarditis again are extremely low, whereas “the likelihood of them being really ill from COVID-19 is much, much higher.”

Butts and Han had no disclosures. The presentation involved no external funding.