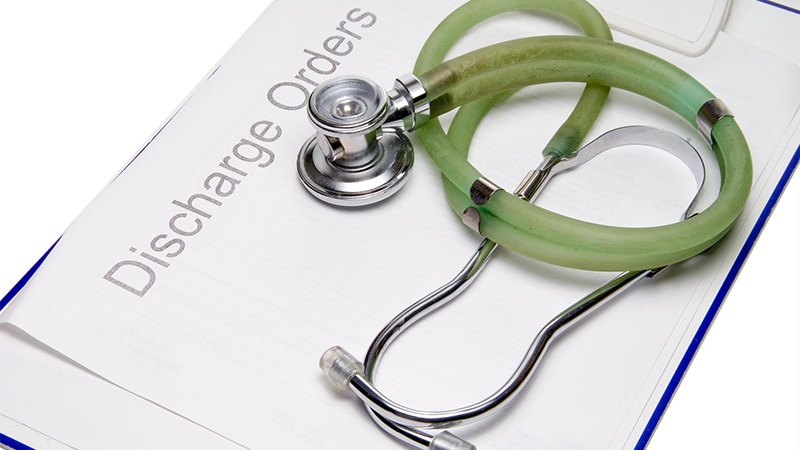 Two new studies born out of the COVID-19 pandemic provide support for the safety and feasibility of sending select patients home the same day as their transcatheter aortic valve replacement (TAVR).

In the multicenter prospective PROTECT TAVR study, the overall composite adverse event rate at 30 days was low at 5.7% and all 124 low-risk patients, including one who required a permanent pacemaker (PPM), were discharged the same day.

Although delayed conduction disturbances requiring a PPM are a concern with early discharge after TAVR due to limited monitoring, no patient needed a PPM across 30 days of follow-up.

“This is absolutely safe and it allowed people to get procedures during the pandemic when they would still be waiting at home and might have suffered a very adverse outcome, become unstable, or died while waiting for their intervention on their severe aortic stenosis. It was kind of like Malcolm Gladwell: ‘right place, right time, with the right training,'” senior author David A. Wood, MD, St. Paul’s and Vancouver General Hospital, Canada, told theheart.org | Medscape Cardiology.

In the second study among 114 equally low-risk, same-day discharge (SDD) patients at the Cleveland Clinic in Ohio, there were no deaths and only one PPM at 30 days.

SDD patients also had fewer in-hospital adverse events than those discharged the next day and had similar 30-day outcomes as next-day discharge patients undergoing TAVR in 2020 or in 2019 prior to the initiation of the SDD protocol.

“We found that discharging patients after TAVR could really be an important intervention to help us treat the patients more quickly and to keep doing these procedures that in a lot of centers were being canceled because of the reduction in hospital-based resources,” lead author Amar Krishnaswamy, MD, told theheart.org | Medscape Cardiology.

Although the findings dovetail with a very clear trend in hospital length of stay reduction over the past 5 years, both investigators stressed that these were highly selected patients who underwent TAVR early in the day to allow for close monitoring and had both the desire to leave the same day and an appropriate social network for at-home care.

“The selection criteria of patients included, and the practices employed in these studies, lay a roadmap for the broader implementation of an SDD strategy after TAVR,” Jay Giri, MD, MPH, and Paul Fiorilli, MD, Hospital of the University of Pennsylvania in Philadelphia, write in the editorial.

There are some caveats, however, that must be considered before broader SDD uptake, they say. First, all of the centers in the two trials had “extensive experience with minimalist TAVR and had already developed clinical care pathways that minimize critical care monitoring and promote early ambulation and reconditioning.”

SDD TAVR was offered only to patients receiving conscious sedation, a trend that is increasing over the last decade but accounted for only 64% of TAVRs in the United States in 2019.

Most patients (96.8% in PROTECT TAVR and 91.2% in Cleveland) also received balloon-expandable valves, which have been associated with lower PPM rates than self-expanding valves.

Giri and Fiorilli point out that neither trial is adequately powered to examine periprocedural stroke and its influence on SDD outcomes. Studies suggest stroke risk remains elevated for 48 hours post-procedure, so it’s possible that “opportunities for optimal intervention in these cases may be delayed or missed altogether in patients being discharged on the same day,” they write.

Not “Ready for Primetime”

Although PROTECT TAVR provides some reassurance about the safety of SDD, especially since it’s the first multicenter study, “this isn’t ready for primetime and this is in no way ready for the majority or even half of transfemoral TAVR patients,” Wood said. “This was done for a very carefully selected group.”

Indeed, the 124 SDD patients were “cherry-picked” — accounting for just 6% of the 2100 patients receiving elective transfemoral TAVR across seven centers in the US, Canada, and United Kingdom from March 2020 to August 2021.

Their average age was 78.9 years, 29% were female, the median STS score was 2.4%, and 32.3% had preexisting PPMs. All patients underwent transesophageal echocardiography prior to discharge, and 29.8% were sent home with prolonged rhythm monitoring.

Notably, all seven centers had adopted elements of the previously validated 3M TAVR clinical care pathway for next-day discharge, but patient selection for SDD was at the discretion of the individual hospital. As to why 94% of patients were excluded from SDD: Centers may have been too conservative, but the data aren’t available to tease that out, Wood said.

“If you’re asking me in the future whether a greater percentage of elective TAVR patients might be able to go home the same day, yes, probably. But that will require further evaluation and probably further prospective registries like PROTECT TAVR to find out where we’re at,” he said.

Krishnaswamy observed that there’s been increasing use of minimalist TAVR nationally and that at the Cleveland Clinic, more than 90% of patients undergo TAVR under conscious sedation without a transesophageal echo and approximately one third of those undergoing outpatient TAVR are discharged the same day.

“We think that the potential benefits outside of the benefits that are realized with regard to hospital resource utilization, theoretically could include a reduction in risks of delirium, especially for those patients who are elderly, and for whom the hospital environment can be certainly unfamiliar and uncomfortable,” he said.

The clinic’s same-day discharge protocol, implemented in March 2020, does not include any restrictions on patient characteristics, such as age or STS-PROM score. It is based on six criteria: transfemoral TAVR with conscious sedation, 6-hour post-TAVR bedrest with rhythm monitoring, no major complications or need for further observation, stable hemodynamics and ECG during recovery, comfortable ambulation post-procedure, and social support at home.

SDD patients were younger, more often male, and had a lower STS-PROM score when compared with 481 next-day discharge patients treated in 2019.

At 30 days, the two groups had similar outcomes including cardiovascular readmissions (3.5% vs 6.2%) and PPM/implantable cardioverter defibrillator implantations (1 vs 3).

“I think with regard to the hospital length of stay pathways, the most germane risks would be neurologic complications and pacemaker rates,” Krishnaswamy said. “So if centers are considering utilizing same-day discharge, they need to really first evaluate their data to understand what their own rates are.”

Giri and Fiorilli concurred, calling for future investigations into the true incidence of major complications in the first 48 hours post-TAVR as well as the appropriate method for postdischarge home monitoring and potential unintended economic consequences of greater SDD uptake.