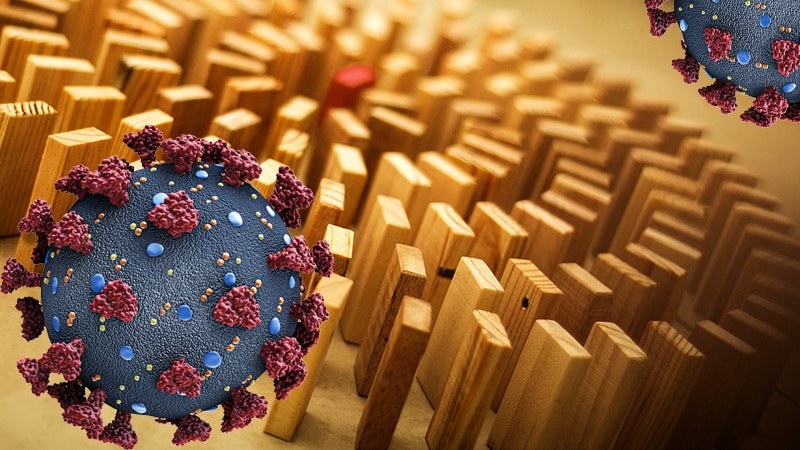 Just because many people seem more than ready to put the COVID-19 pandemic behind us doesn’t mean it’s really over. In fact, case numbers are rising again – with new infections reported in about 95,000 Americans each day – and hospitalizations are up 20% as well.

It’s yet another reminder of the dangers that remain from a virus that has now killed more than 1 million Americans.

“There needs to be clear communication to the public for people to understand that the virus is still a threat,” former CDC Director Tom Frieden, MD, said in an email interview. “We are in an infection surge right now.”

“How many people will die is very much up to us and our ability to stay up to date on vaccinations, mask up when in a high-risk area, get people who need it rapidly diagnosed and treated, and implement public health and social measures when needed,” he said.

The Department of Health and Human Services, meanwhile, is reacting to the new COVID-19 picture by extending its emergency order beyond its expiration date of July 15. The order allows Americans to access medications, vaccines, and more with no out-of-pocket costs part of an emergency use authorization.

The daily average of hospitalizations has reached 3,000, an increase of 19% over last week, and daily deaths are hovering at 275.

CDC Director Rochelle Walensky, MD, acknowledged that while these numbers are far lower than those seen during the first Omicron spike, “Nearly 300 deaths a day is still far too many,” she said during a White House media briefing Wednesday.

It’s not just the U.S. on high alert. The European Centre for Disease Prevention and Control recently designated Omicron subvariants BA.4 and BA.5 “variants of concern.”

In Portugal – a country that has seen climbing COVID-19 case numbers in recent weeks – BA.5 made up around 37% of positive cases as of May 8, according to the Portuguese National Institute of Health.

First identified in South Africa early this year, BA.4 and BA.5 are now the dominant variants in the country.

Because BA.4 and BA.5’s daily growth advantage over Omicron strain BA.2 in Portugal (13%) is similar to what was previously reported in South Africa (around 12%), European officials predict BA.5 will be Portugal’s dominant variant in the coming days.

The organization says the high growth rate is due to the variants’ “ability to evade immune protection induced by prior infection and/or vaccination, particularly if this has waned over time.”

While the presence of BA.4 and BA.5 in most parts of Europe remains low, the European CDC predicts the variants could cause a spike in COVID-19 case numbers and could ultimately become the dominant variants in Europe in coming months.

But early research does not suggest that BA.4 and BA.5 are more dangerous, compared to other Omicron strains.

It remains to be seen whether BA.4/BA.5 can outcompete BA.2.12.1, which is nearly dominant in the U.S., says Eric Topol, MD, a practicing cardiologist at Scripps in La Jolla, CA, and Medscape editor-in-chief. (Medscape is a part of the WebMD network.)

Regardless, these variants can pose a further challenge to our immune systems, which may not recognize them fully, given the minimal cross-immunity provided by BA.1, the original Omicron strain, he says.

“That is especially noteworthy since 40% to 50% of Americans were infected with BA.1 [or BA.1.1], and without added protection from vaccination, they will be vulnerable to BA.2.12.1 infections.”

The Case of the Missing Numbers

The 95,000 new daily cases reported by the CDC do not reflect “the real toll of the current wave, since most people with symptoms are testing at home or not testing at all.”

Also, there is pretty much no testing among people who don’t have symptoms, Topol says.

The actual number of cases is likely at least 500,000 per day, he says, “far greater than any of the U.S. prior waves except Omicron.”

“This can contribute to quick and dramatic surges in infections,” says Frieden, the president and CEO of Resolve to Save Lives, an organization that aims to prevent 100 million deaths from heart disease worldwide and to make the world safer from epidemics.

“As difficult as it is to mentally confront, we must plan on something worse than Omicron in the months ahead,” Topol says.

Seven things add to this “highly unfavorable picture” of the near future, he says:

Paxlovid and Other Reasons for Hope

Frieden offered several reasons for optimism as well. For many in the United States, summer offers the chance to gather outdoors instead of indoors, and extra ventilation cuts down on transmission risk, he says.

In addition, “the more people stay up-to-date on their vaccines, the fewer deaths there will be.”

Another positive to consider is the antiviral agent Paxlovid, Frieden says, which “provides further protection against severe illness or death if taken soon after infection.”

Topol also talked about Paxlovid, although he was more cautious.

“Our backstop to infections in people at increased risk has turned to Paxlovid,” but unfortunately, evidence is showing that some people get sick again after taking the drug for 5 days, he says.

“Not only does this unanticipated problem urgently need to be sorted out, but we may confront mounting resistance to Paxlovid in the months ahead as it continues to gain wide-scale use,” Topol says.

“We absolutely need an aggressive stance to get ahead of the virus – for the first time since the pandemic began – instead of surrendering,” he says. “That means setting priorities, funding, and the realization, unfortunately, that the pandemic is far from over.”

As for funding, White House coronavirus response coordinator Ashish Jha, MD, said Wednesday that the lack of congressional action on more money for the pandemic has the country poised for more problems.

Without more money, “we will find ourselves in a fall or winter with people getting infected and no treatments available for them because we will have run out.”

When asked about a return to masking, Frieden cited the big picture. “The discourse around masking and public health tools more broadly needs to be reframed. Masking is a low-cost, lifesaving tool that can help control the spread of other infectious diseases, not just COVID.”

“Wearing a mask doesn’t just have to be a pandemic practice,” he says. “We can use many of the healthy practices that we’ve learned, developed, and normalized during the pandemic to control the spread of diseases ongoing and keep the world healthier.”