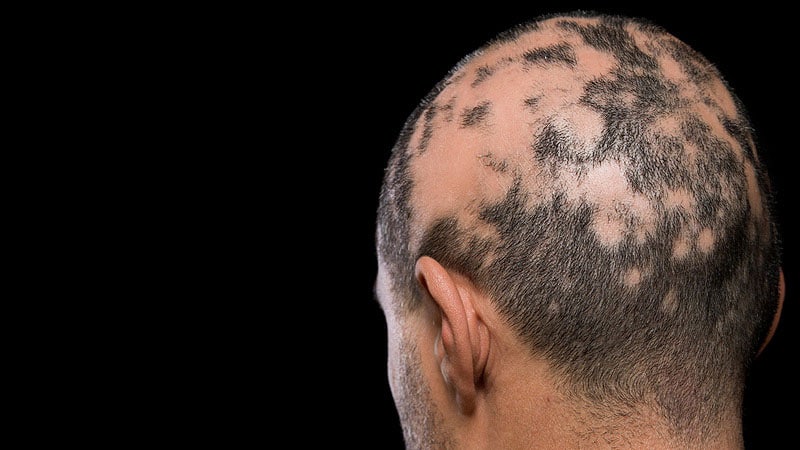 The results indicate improved response rates and hair growth among trial participants, said Brett King, MD, PhD, an associate professor of dermatology at the Yale University School of Medicine in New Haven, Connecticut. He is the lead author of the analyses and presented the research.

King presented 36-week results from the clinical trials at the European Academy of Dermatology and Venereology (EADV) 2021 Annual Meeting. The same results were also published March 26, 2022, in the New England Journal of Medicine.

“Every bit of data we’ve had is hugely important,” King said in an interview with Medscape Medical News. “Every time we add 16 weeks of data across hundreds of patients, we are making a huge step forward toward the goal of FDA approval for a medication for alopecia areata.”

All patients enrolled in the two trials, called BRAVE-AA1 and BRAVE-AA2, had severe alopecia areata, defined as a Severity of Alopecia Tool (SALT) score of ≥ 50, meaning 50% or less scalp coverage. The score ranges from 0 (no hair loss) to 100 (complete hair loss). The primary endpoint was a SALT score ≤ 20 (80% scalp hair coverage).

The researchers pooled data from both clinical trials, with a combined enrollment of 1200, for the 52-week results presented at the meeting. The placebo group stopped at 36 weeks, and these patients were randomly reassigned to either the 4-mg or 2-mg once-daily baricitinib treatment groups.

Comparatively, at 36 weeks, 35.2% of participants in BRAVE-AA1 and 32.5% of participants in BRAVE-AA2 receiving 4 mg of baricitinib had at least 80% scalp coverage. In the group taking the lower dose, 21.7% and 17.3% of patients in the BRAVE-AA1 and BRAVE-AA2 trials, respectively, had achieved at least 80% scalp coverage at 36 weeks. (These percentages differ slightly from the NEJM article because of a different analysis of missing data, King said. For comparison of both 36- and 52-week results, the percentages from the EADV are used above.)

The results indicate that 5% more patients reached the primary endpoint in the additional 16 weeks of the trial, King said.

Alopecia areata is an autoimmune condition where immune cells attack hair follicles, causing the hair to fall out, and is associated with emotional and psychological distress. Any hair follicle can be attacked, but they are rarely destroyed, so hair can regrow. The BRAVE-AA1 and BRAVE-AA2 trials focused on scalp hair regrowth.

“It’s a fantastic achievement and a major step forward in alopecia areata, especially for patients with the most severe and refractory cases,” said Arash Mostaghimi, MD, MPH, the director of inpatient dermatology at Brigham and Women’s Hospital (BWH) in Boston, Massachusetts. Mostaghimi is on the advisory board for Eli Lilly and Company (Lilly), which manufactures baricitinib, and BWH was one of the clinical sites of the trial.

Adverse events at 52 weeks were consistent with data from 36 weeks, which found that none of these adverse events occurred in more than 10% of participants. The most common adverse events were headache, acne, and increases in muscle-related blood markers. The most common infections reported were pneumonia, herpes zoster, and urinary tract infection. Other opportunistic infections reported during the trial included tuberculosis, multidermatomal herpes zoster, esophageal candidiasis, pneumocystosis, acute histoplasmosis, cryptococcosis, cytomegalovirus, and BK virus.

In February 2022, the US Food and Drug Administration granted priority review for baricitinib for the treatment of severe alopecia areata. Lilly expects a regulatory decision by the end of the year, they said in a press release.