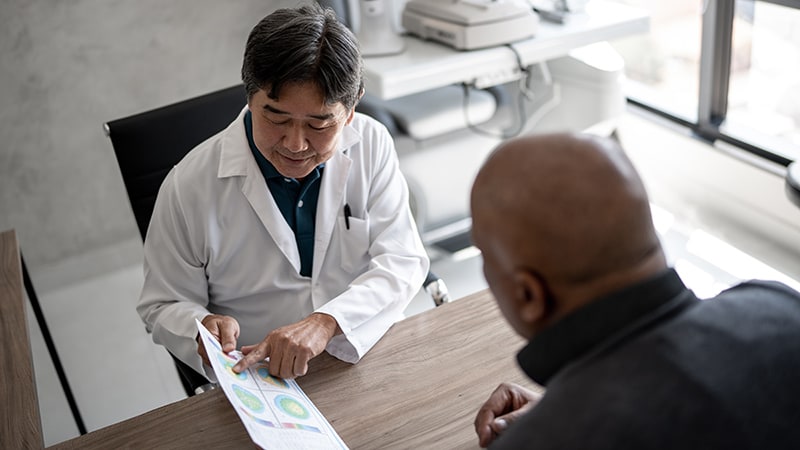 The first ever head-to-head comparison of two biomarker tests for grading prostate cancer came out a draw, suggesting that clinicians can use either assessment with confidence, particularly in the setting of low-risk tumors.

The study found that the Prostate Health Index (phi) test (Beckman Coulter) and the 4Kscore (OPKO Health) are equally effective at assessing the likelihood that a patient with a low-risk tumor will progress to more advanced disease.

“No previous studies have directly compared the utility of 4Kscore, phi, and PSA density [PSAD] measured in the same men to predict biopsy outcomes on active surveillance,” epidemiologist Bruce Trock, PhD, of Johns Hopkins University, Boston, Massachusetts, who presented the results at the American Urological Association (AUA) 2022 Annual Meeting, told Medscape Medical News. “The results came out pretty much the same,” he added.

For the study, Trock and colleagues evaluated the performance of the two biomarkers to predict grade reclassification to GG = 2 (Gleason 7) in 133 men on active surveillance for low-risk prostate cancer.

Both 4Kscore and phi were statistically significant when added to clinical predictors, and for both, values above the median were associated with about a threefold increase in the risk of upgrading, Trock said. PSAD — total PSA (ng/mL) divided by prostate volume (mL) — was not significant when combined with clinical variables, he said.

Andrew Vickers, PhD, a biostatistician at Memorial Sloan Kettering Cancer Center, New York City, and a co-developer of the 4Kscore, said the results weren’t surprising. “I really don’t think either phi or 4K need much more ‘support.’ We have thousands of patients studied in phi and 4K, and for 4K you have data showing very high area under the curves [AUCs] for predicting death at 20 years,” Vickers, a co-author of the new study, said.

Trock said the study found the AUC for the clinical model — which includes age, the number of prior biopsies, positive cores, and maximum percent cancer in any core at prior biopsy — was 0.811. AUCs were 0.811 for PSAD, 0.814 for the 4Kscore, and 0.829 for phi.

Brian Helfand, MD, PhD, chief of urology at NorthShore University HealthSystem in Illinois, said the results were not surprising. “4K was designed to approximate phi. They should be roughly equivalent,” he said.

One factor in the decision to use either test might be cost, Helfand noted. His hospital charges $554 for a panel that includes regular PSA, free PSA, and phi, offering more data at a lower cost than the 4Kscore, which lists at $760.

But primary care physicians have different opinions about that notion.

Anthony Leazzo, DO, chair of family medicine at Northwestern Medicine Delnor Hospital, Chicago, Illinois, said the testing could be a boon for primary care physicians who routinely follow their patients on active surveillance to ensure they are following through on testing.

However, Stephen Spann, MD, MBA, founding dean of the Tilman J. Fertitta Family College of Medicine at the University of Houston, Texas, questioned the utility of the tests for primary care practices.

“I do not see any evidence [in the study] that would lead me to use one of these tests as a screening test for prostate cancer,” Spann said. “Furthermore, I would be very hesitant to recommend one of these in the absence of randomized controlled trial data showing that the use of such a test in screening significantly decreased mortality from prostate cancer.”

Vickers has reported receiving royalties from the 4Kscore. Leazzo, Helfand, Spann, and Trock have reported no relevant financial relationships.

Howard Wolinsky is a Chicago-based medical journalist. He’s had six phi tests and a dozen regular PSAs since he went on active surveillance in December 2010.