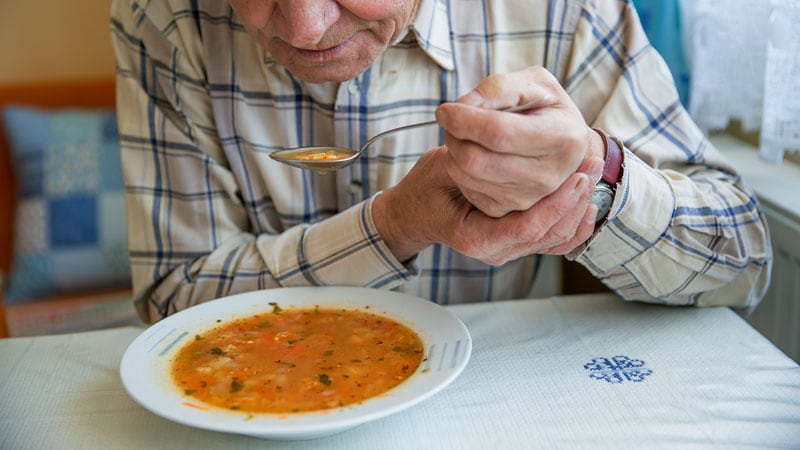 An investigational drug that targets abnormal clumps of alpha-synuclein protein in the gut safely reduced constipation in patients with Parkinson’s disease (PD) in a new study.

The findings are based on 135 patients who completed 7-25 days of treatment with a daily oral dose of the drug, ENT-01, or a placebo. Complete spontaneous bowel movements (CSBMs), the primary efficacy endpoint, increased from a mean of 0.7 per week to 3.2 in individuals who took ENT-01 versus 1.2 in the placebo group.

The phase 2, multicenter, randomized trial showed that the drug “is safe and that it rapidly normalized bowel function in a dose-dependent fashion, with an effect that seems to persist for several weeks beyond the treatment period,” the researchers wrote in their paper on the research, which was published in Annals of Internal Medicine.

The researchers hypothesized that displacing aggregated alpha-synuclein from nerve cells in the gastrointestinal tract may also “slow progression of neurologic symptoms” in patients with PD by arresting the abnormal development of alpha-nucleic aggregates in the brain.

Denise Barbut, MD, cofounder, president and chief medical officer of Enterin, the company developing ENT-01, said the next step is another phase 2 trial to determine whether the drug reverses dementia or psychosis in patients with PD, before conducting a phase 3 study.

“We want to treat all nonmotor symptoms of Parkinson’s disease, not just constipation,” she said.

Constipation Is an Early PD Symptom

Constipation is a common and persistent symptom of PD that often emerges years earlier than other symptoms such as motor deficits. Recent research has linked it to aggregates of alpha-synuclein that bind to cells in the enteric nervous system and may spread to the brain via the vagus nerve.

According to the researchers, ENT-01, a synthetic derivative of the antimicrobial compound squalamine, improves neural signaling in the gut by displacing alpha-synuclein aggregates.

In their double-blinded study, patients were randomized 3:1 to receive ENT-01 or a placebo and stratified by constipation severity to one of two starting doses: 75 mg or three placebo pills or 150 mg or six placebo pills. Doses increased until a patient reached a “prokinetic” dose, a maximum of 250 mg or 10 placebo pills, or the individual’s tolerability limit.

Dosing was fixed for the remainder of the 25 days, after which all patients took a placebo for 2 weeks followed by a 4-week washout.

No deaths occurred, and there were no serious adverse events attributed to ENT-01. However, adverse events occurred in 61 (65.6%) of patients who took the drug versus 27 (47.4%) of those who took a placebo.

Of 93 patients randomized to the drug (25.8%), 24 discontinued treatment before therapy ended, mostly because of nausea or diarrhea. That compared with 8 of 57 (14.1%) patients in the placebo group who stopped taking their pills before the end of the therapy period.

The researchers suggested that nausea and diarrhea might be alleviated by more gradual dosing escalation and the use of antinausea medication.

Barbut noted that a previous open-label trial of 50 patients with PD showed that ENT-01 acts locally in the gastrointestinal tract, which means it would not be absorbed into the bloodstream or interfere with other medications.

Researchers noted that, in small subsets of patients with dementia or psychosis, greater improvements in those symptoms occurred among those who took ENT-01 versus those who took a placebo.

The researchers said the findings must be evaluated in future trials dedicated to studying ENT-01’s effects on PD-related psychosis and dementia.

Satish Rao, MD, PhD, a professor of medicine at the Medical College of Georgia, Augusta, who was not involved in the study, cautioned that long-term efficacy and tolerability have yet to be shown but lauded the study’s rigor including a “very robust endpoint” in CSBMs.

He added that, if findings are reproduced in a large study, the drug could have “a major impact” not just in treating constipation, for which there are no PD-specific drugs, but also in addressing neurological dysfunctions that are cardinal features of PD. “That is what is exciting to me, because we’re now talking about reversing the disease itself,” he said.

However, Barbut said it’s been difficult to get across to the medical community and to investors that a drug that acts on nerve cells in the gut might reverse neurologic symptoms by improving direct gut-brain communication. “That’s a concept that is alien to most people’s thinking,” she said.

Enterin funded the study and was responsible for the design, data collection and analysis. Its employees also participated in the interpretation of data, writing of the report, and the decision to submit the manuscript for publication. Barbut reported stock options in Enterin and patent interests in ENT-01. Fifteen other study investigators reported financial ties to Enterin and/or ENT-01 including employment, stock options, research funding, consulting fees and patent application ownership. Rao reported receiving honoraria from multiple companies that market drugs for general constipation.