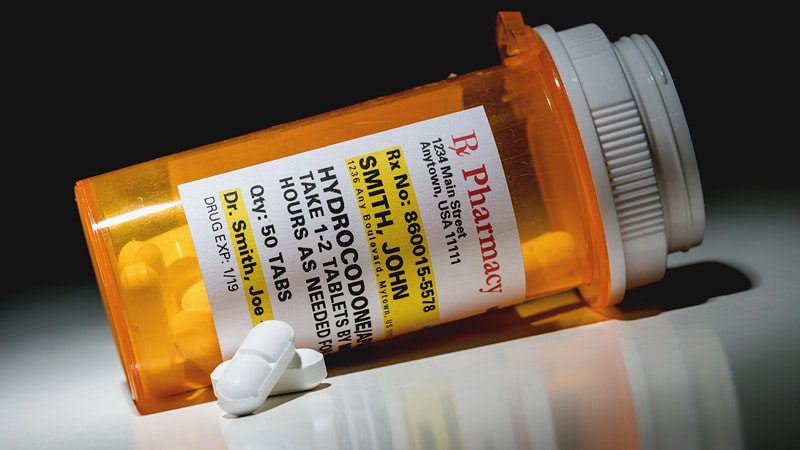 Opioid prescriptions after minor to moderate surgeries do not reduce pain after patient discharge, according to a new meta-analysis. Researchers also found that patients given opioid prescriptions are at higher risk of adverse events, including vomiting, nausea, and constipation.

“The prescription of opioids after surgery is embedded in North America’s healthcare culture, while in many other countries opioids are rarely prescribed after surgical discharge,” Julio F. Fiore Jr, PhD, MSc, first author of the analysis and an assistant professor in the department of surgery at McGill University, Montreal, Canada told Medscape Medical News in an email.

“We found no evidence that analgesia regimens including opioids are superior to opioid-free analgesia using simple over-the-counter analgesics. These findings are of great importance to clinicians and patients as, ultimately, pain management after surgery should be guided by evidence, rather than by tradition and dogma,” he noted.

The analysis was published June 18 in The Lancet.

For the research, Fiore and colleagues searched medical databases to find multidose studies from January 1, 1990, to July 8, 2021, comparing opioids with opioid-free pain management after surgeries performed in an outpatient setting or at a hospital. Of the 47 studies included in the analysis, eight were randomized control trials. Nearly two thirds (64%) were for elective minor procedures — the majority being dental work — and 36% were moderate procedures, mainly encompassing general surgeries such as hernia repair and minimally invasive orthopedic procedures.

Opioid-free pain medications included nonsteroidal anti-inflammatory drugs (89% of trials) and/or acetaminophen (57% of trials). The most common opioids used in trials were codeine (43%), hydrocodone (23%), and tramadol (19%).

“We are living the era of evidence-based practice, and our research shows that the prescription of opioids at discharge after surgery is clearly not supported by evidence,” Fiore noted. “Unfortunately, alternatives to opioids are often overlooked by North American surgeons, while they should be incorporated as the foundation of postoperative analgesia whenever possible.”

But Karim Ladha, MD, MSc, an anesthesiologist at St. Michael’s Hospital and the University of Toronto, Canada, is wary of changing pain management practices based on this analysis alone. The paper “brings forth some data that shows that it is possible to not use opioids after surgery, without necessarily affecting patients’ experience with pain or satisfaction after the procedure,” he told Medscape Medical News. But these findings should be interpreted with caution, he said, adding, “This should not be taken as evidence to deny patients appropriate pain care after surgery.”

The studies included in the systematic review only comprised a small subset of surgeries, and many procedures were dental work, he said. The trials selected for the analysis were generally considered low-quality, meaning they had a higher risk of bias such as potential for selective reporting and deviation from the intended interventions, Fiore acknowledged. The research also did not include major and complex procedures, such as liver resections and thoraco-abdominal procedures, so these findings are not applicable to these populations, Fiore added.

Because the surgeries and patients were grouped together for the meta-analysis, the research also does not highlight if certain surgical procedures or if certain patients would more greatly benefit from opioids to control pain after surgeries. Both Fiore and Ladha are involved with upcoming trials that will compare opioid vs nonopioid medication in controlling pain after several different types of surgery, including gallbladder removal, breast lumpectomy, hernia repairs, and bariatric surgery.

“There’s still a lot more work to be done to figure out what’s best for treating patients’ pain and how to do so in a safe and effective manner,” Ladha said.

This study was funded by the Canadian Institutes of Health Research. Fiore has received research funding from Merck and honorarium from Shionogi. Ladha’s current research on this topic is funded by the Patient-Centered Outcomes Research Institute.