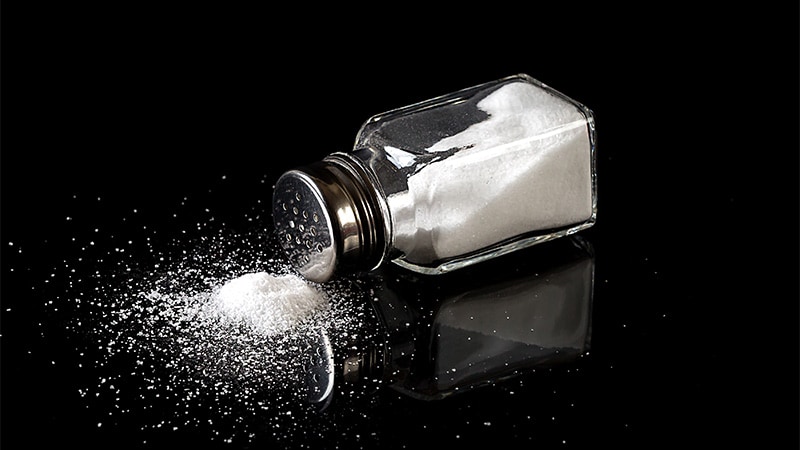 Cutting out almost all salt when preparing meals was associated with a worse prognosis in patients with heart failure with preserved ejection fraction (HFpEF), according to the results of a new study.

Results from a post-hoc analysis of the TOPCAT trial show that those with a cooking salt score of zero were at significantly higher risk of the primary outcome of cardiovascular (CV) death, HF hospitalization, and aborted cardiac arrest than those whose score was above zero. Survival was similar in both groups.

“Thus, when giving salt restriction advice to patients with heart failure with preserved ejection fraction, physicians should be careful instead of just saying “as least as possible,” they said in an email to theheart.org | Medscape Cardiology.

The study was published today in the journal Heart.

The authors note that HF guidelines recommend reduced salt intake, but that there’s a lack of high-quality evidence to support those recommendations and no consensus on how low to go.

Previous studies have shown that reduced dietary sodium intake was associated with worse survival and higher readmission rate in patients with HF, whereas the SODIUM HF trial reported earlier this year that dietary sodium intake of less than 100 mmol (1500 mg) per day did not improve 1-year clinical outcomes but moderately improved quality of life and New York Heart Association functional class.

“In daily clinical practice, we noticed that some physicians advised patients with heart failure to take salt as least as possible, but it could lead to hyponatremia and loss of appetite, which has been frequently reported to be associated with poor prognosis. Thus, we wanted to investigate the potential effect of overstrict salt restriction,” Liu and Liang explained.

The investigators examined data from 1713 participants aged 50 and older with HFpEF (left ventricular ejection fraction 45% or greater) in the phase 3 TOPCAT trial, excluding those from Russia and Georgia. Patients self-reported how much salt they added to cooking staples, such as rice, pasta, potatoes, soup, meat, and vegetables, and were scored as: 0 (none), 1 (⅛ tsp), 2 (¼ tsp), and 3 (½ tsp or more) points. Median follow-up was 2.9 years.

TOPCAT failed to show that spironolactone improved CV outcomes over placebo but regional differences in data from Russia/Georgia and the Americas have raised concerns about its validity.

In the present analysis almost half the participants (816) had a cooking salt score of zero, 56.4% were male, and 80.8% were White. They were more likely than participants with a salt score greater than zero to have a previous HF hospitalization, diabetes, poor renal function, and a lower ejection fraction (57% vs 60%). Half were randomly assigned to spironolactone.

Results of subgroup analyses suggested that patients aged 70 years or younger (HR, 0.644) and those of Black and other ethnicities (HR, 0.574) were at greater risk of the primary outcome from aggressive restriction of cooking salt.

“It was an interesting but unproved finding,” Liu and Liang observed. “One possible explanation is the difference in [renin-angiotensin-aldosterone system] RAAS physiology and its response to salt restriction among races, and the other is the difference in accustomed food, because the cooking salt score only accounted for sodium added during cooking but not sodium from ingredients.”

Spearman correlation analyses showed that the cooking salt score correlated significantly with systolic and diastolic blood pressure, serum sodium, and chloronium levels but not with plasma volume status, suggesting that low sodium intake did not have an intravascular volume contraction effect on patients with HFpEF.

The authors pointed out that the salt score was self-reported, hemodynamic parameters were seldom acquired in TOPCAT, and that reverse causation between low dietary sodium intake and worse HF might still exist, despite a propensity score-matching sensitivity analysis.

Reached for comment, Mary Norine Walsh, MD, medical director of heart failure and cardiac transplantation, Ascension St. Vincent Heart Center, Indianapolis, Indiana, said in an email that the authors appropriately excluded patients enrolled from Russia and Georgia because of concerns about the representativeness of patients with HFpEF in these two countries, which has been previously demonstrated.

“What limits the importance of the authors’ findings, which they acknowledge, is that the sodium intake for each patient was self-reported,” she said. “No confirmatory testing was done and recall bias could clearly have played a role.”

“Last, many patients with HFpEF have significant volume overload and dyspnea and appropriate sodium restriction is needed to help address symptoms and achieve a euvolemic state,” added Walsh, a past president of the American College of Cardiology.

Future trials are needed to determine an optimal salt restriction range for patients with heart failure, Liu and Liang suggested. “A randomized controlled trial may be hard to achieve because it is difficult to set a perfect control group. Therefore, an analysis using real-world data with a dose-response curve could be ideal.”