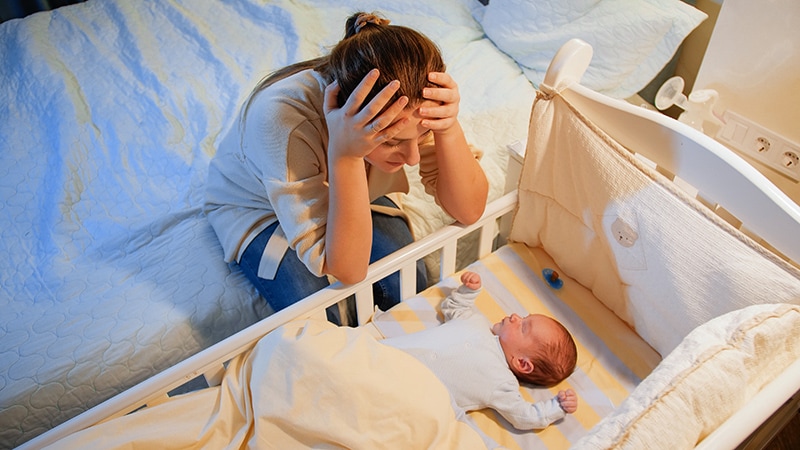 Fewer than 10% of parents followed recommended safe sleep practices for their infants aged 12 months and younger at both sleep onset and after nighttime waking, based on data from a survey of 1,500 parents published in Pediatrics.

Sleep-related death remains a major cause of infant mortality in the United States despite the early success of public health campaigns for safe sleep practices, such as “Back to Sleep,” and many parents persist in unsafe practices such as prone positioning and bed-sharing, Mersine A. Bryan, MD, of the University of Washington, Seattle, and colleagues wrote. “Though nighttime waking is common for infants, less attention has been paid to the safety of second-sleep practices.”

To examine the prevalence and safety of infant second-sleep practices, the researchers used a cross-sectional online survey to collect information on sleep practices from parents of infants aged 12 months and younger; 74% of the respondents were female, 65% were White, 12% were Black, and 17% were Hispanic. The mean age of the infants was 6.6 months, and 24% were aged 3 months and younger.

The survey included parent reports of three safe sleep practices based on the American Academy of Pediatrics 2016 Safe Infant Sleep Guidelines: supine infant sleep position, use of a separate sleep space (vs. bed sharing), and use of an approved surface/safe location (such as a bassinet, crib, cradle, or play yard vs. an adult bed).

Parents were asked to report sleep practices at sleep onset and at nighttime waking, and the researchers used a composite score to determine safe practices were met at each of these two time points.

The study findings were limited by several factors including the use of an online survey, which limited the study population to those with internet and computer access, and the reliance on self-reports and only two time points, the researchers noted. Other limitations included the inclusion of only three of the AAP sleep recommendations, and the inclusion of only English speakers.

However, the results were strengthened by the large, diverse, and geographically representative sample of parents.

“When advising families about infant sleep, pediatricians should discuss nighttime wakings with parents because they are common and reinforce the need for safe sleep practices every time,” the researchers noted.

The current study is important because infants continue to die or experience life-long catastrophic health outcomes as a result of not following safe sleep practices, Cathy Haut, DNP, CPNP-AC, CPNP-PC, a pediatric nurse practitioner in Rehoboth Beach, Del., said in an interview.

“I am not surprised by the study findings,” said Haut, who was not involved in the study. “As a pediatric nurse practitioner for over 35 years, I see infant sleep as a continuing challenge for families. In today’s fast-paced world, multiple priorities leave parents few resources for managing their own well-being, with adequate sleep being one health requirement that is often not met for them.”

To improve safe sleep practices, “it is imperative for health care providers in any setting to address safe sleep practices for infants and children,” said Haut. “In addition to safety, opportunity for adequate hours of sleep is also important.” She acknowledged that, “in the office setting, time is a huge barrier to completing comprehensive anticipatory guidance. When parents ask questions about sleep, they are often doing everything they can to physically make it through the night with a crying infant. Enforcing safe practices at this point is extremely difficult.”

However, some opportunities for safe sleep education include the prenatal period when parents can take time to listen and plan, not just for feeding preferences but for safe infant sleep practices, Haut noted.

“When sleep is a problem, families can be invited back to the office for additional counseling and education, which allows more time than within a scheduled health visit,” Haut emphasized. “Finally, enhanced public awareness is an aspect of learning. In my career I have seen the devastating results of suffocation while cosleeping as well as injuries from falling from a bed or inappropriate sleeping space, and other poor outcomes from inadequate support for safe sleep habits.”

As for additional research, studies are needed to include larger populations and “to further quantify positive outcomes of following safe sleeping practices,” said Haut. The results of these studies should be made available to the general public, not only to health care professionals.