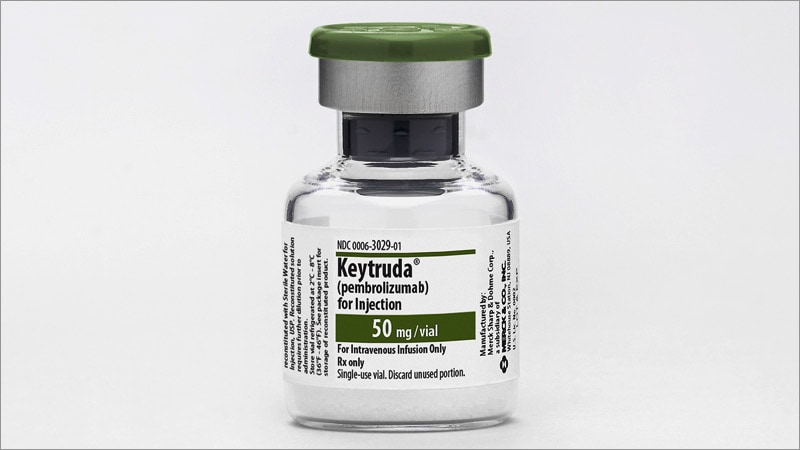 CHICAGO — Pembrolizumab has shown promise as adjuvant therapy for stage IIB and IIC melanoma, shows the first interim analysis of the phase 3 KEYNOTE-716 study recently published in The Lancet.

The findings meet an unmet need as the recurrence risk in stage IIB and IIC melanoma is “underrecognized,” said author Georgina Long, MD, comedical director of the Melanoma Institute Australia, University of Sydney.

In fact, their risk of recurrence is similar to patients with stage IIIB disease, wrote David Killock, PhD, in a related commentary published in Nature Reviews.

The adjuvant treatment resulted in an 89% recurrence-free survival in patients who received pembrolizumab, compared with 83% of patients in the placebo group (hazard ratio, 0.65; P = .0066). These findings were used as the basis for Food and Drug Administration approval of pembrolizumab (Keytruda, Merck) for this patient population in December 2021.

Despite the positive findings, Killock called for more research on distant metastasis-free survival, overall survival, and quality of life data to “establish the true clinical benefit of adjuvant pembrolizumab.”

At the annual meeting of the American Society of Clinical Oncology, Long presented the third interim analysis which showed pembrolizumab reduced recurrence and distant metastases at 24 months, although the clinical benefit was relatively small at an approximately 8% improvement in recurrence-free survival and about a 6% improvement in distant metastasis-free survival. About 83% in the pembrolizumab group had treatment-related toxicities versus 64% in the placebo group. There were no deaths caused by treatment. About 90% of pembrolizumab-related endocrinopathies led to long-term hormone replacement.

In a discussion that followed the presentation at ASCO, Charlotte Eielson Ariyan, MD, PhD, said the results are bittersweet. Higher-risk stage IIC patients have a risk of recurrence of about 40%.

“It’s high, but the absolute risk reduction is about 8%. This is a very personalized discussion with the patient and the physician in understanding their risk of toxicity is about 17% and higher than their absolute risk reduction with the treatment. For me, this is a bitter pill to swallow because you’re treating people longer and you’re not sure if you’re really helping them. Until we can further define who the highest-risk patients are, I think it’s hard to give it to everyone,” said Ariyan, who is a surgeon with Memorial Sloan Kettering Cancer Center, New York.

In addition to weighing short-term benefits and toxicity, there are longer-term concerns. Toxicity experienced from PD-1 inhibitors in the adjuvant setting could impact future treatment decisions. “We’re very lucky here in melanoma to know that systemic therapies are effective and we can cure people who recur. I would argue this is why we probably will never really see a difference in the survival benefit in this group because people who cross over will probably do well,” Ariyan said.

During the Q&A session, Vernon Sondek, MD, Moffitt Cancer Center, Tampa, encouraged physician colleagues to have an open mind about treatments. “Beware of dogma. We thought that adjuvant immunotherapy works much better in patients with ulcerated primary tumors. That’s a dogma in some parts of the world. Yet the T4a patients in KEYNOTE-716 dramatically outperformed the ulcerated T3b and T4b [patients]. We still don’t know what we don’t know.”

KEYNOTE-716 included 976 patients 12 years or older with newly diagnosed completely resected stage IIB or IIC melanoma with a negative sentinel lymph node. Patients were randomized to placebo or 200 mg pembrolizumab every 3 weeks, or 2 mg/kg in pediatric patients, over 17 cycles. Almost 40% of patients were age 65 or older. T3b and T4b were the most common melanoma subcategories at 41% and 35%, respectively.

Long has held consulting or advisory roles for Merck Sharpe & Dohme, which funded this study.