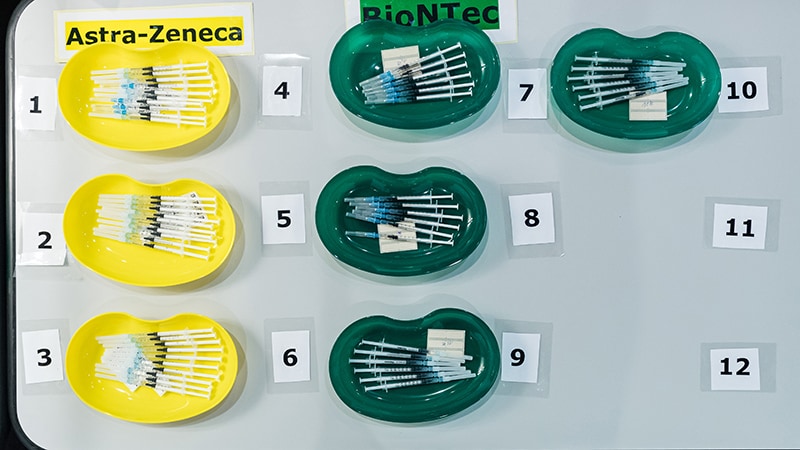 The Pfizer-BioNTech and AstraZeneca vaccines — the primary vaccine options in the United Kingdom — were less effective against symptomatic COVID-19 when people were exposed to the Delta variant of SARS-CoV-2 compared with the Alpha variant (known as B.1.1.7, or the UK variant), according to a study published online today in the New England Journal of Medicine.

The differences were particularly notable after only one dose of either of the vaccines. With one dose of Pfizer, the effectiveness against the Alpha variant was 48.7% compared with 30.7% against the Delta variant. Results after one dose of the AstraZeneca vaccine were similar to those numbers.

The Delta variant first emerged in India, but rapidly spread globally and is now fueling an increase in COVID cases in countries including the United Kingdom. In the United States, the Delta variant now accounts for at least 83% of cases.

Whole-genome sequencing was used to identify whether people who tested positive had the Delta or Alpha variants.

“The proportion of all positive samples that were sequenced increased from approximately 10% in February 2021 to approximately 60% in May 2021,” the authors note.

“The fact [that] there is still notable effectiveness is encouraging. However, complacency is not warranted, since the virus will continue to cause at least mild disease even in some [of] those vaccinated with two doses,” Stephen J. W. Evans, MSc, an epidemiologist with the London School of Hygiene & Tropical Medicine (LSHTM) in the United Kingdom, told Medscape Medical News.

Evans wrote in an accompanying editorial with Nicholas P. Jewell, PhD, also from LSHTM, that the study has some limitations inherent in its methodology.

In the second, researchers estimated the proportion of people with COVID cases caused by the Delta variant relative to the Alpha variant according to vaccination status.

“The underlying assumption was that if the vaccine had some efficacy and was equally effective against each variant, a similar proportion of cases with either variant would be expected in unvaccinated persons and in vaccinated persons,” the authors write.

But Evans and Jewell note that in the United Kingdom the two vaccines were used in different ways over time and were available in different healthcare settings and for different age groups at different times, which makes comparing them difficult.

According to the study, in the United Kingdom, vaccination was first prioritized for older adults, caregivers, and healthcare and social care workers, then rolled out to people in certain risk groups and younger-age groups.

“This is not a randomized trial, so we do not know that the unvaccinated are similar to those vaccinated,” Evans told Medscape Medical News,

While the study could adjust for age and gender and a number of other factors, he said, it couldn’t adjust for detailed medical history, for instance, or some behaviors.

“The study allows to some degree for inclination to seek healthcare or a test for the virus, but does not allow for [factors such as] risky behavior such as participating in large, crowded events,” Evans said.

However, the message is clear in the effectiveness of both vaccines when both doses are taken, the editorialists say. They write: “As the [D]elta variant affects various countries, including the United States, the current imperative is to vaccinate as many people as possible, as quickly as possible.”