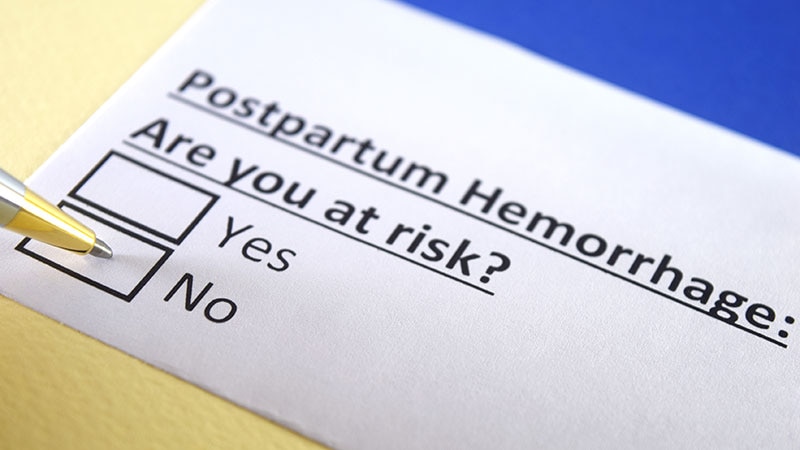 The rate of postpartum hemorrhage for hospital deliveries in the United States increased significantly over a 20-year period, according to data from more than 76 million delivery hospitalizations from the National Inpatient Sample.

Postpartum hemorrhage remains the leading cause of maternal morbidity and mortality worldwide, and many clinical and patient-level risk factors appear to be on the rise, wrote Chiara M. Corbetta-Rastelli, MD, of the University of California, San Francisco, and colleagues.

In a study published in Obstetrics & Gynecology, the researchers reviewed data from hospitalizations for females aged 15-54 years for deliveries between 2000 and 2019 using the National Inpatient Sample. They used a regression analysis to estimate average annual percentage changes (AAPC). Their objectives were to characterize trends and also to assess the association between risk factors and the occurrence of postpartum hemorrhage and related interventions. Demographics, clinical factors, and hospital characteristics were mainly similar between the group of patients with postpartum hemorrhage and those with no postpartum hemorrhage.

Approximately 3% (2.3 million) of 76.7 million hospitalizations for delivery were complicated by postpartum hemorrhage during the study period, and the annual rate increased from 2.7% to 4.3%.

The researchers also examined the association of specific risk factors and interventions related to hemorrhage, notably blood transfusion and peripartum hysterectomy. Blood transfusions in individuals with postpartum hemorrhage increased from 5.4% to 16.7% between 2000 and 2011, (AAPC, 10.2%) then decreased from 16.7% to 12.6% from 2011 to 2019 (AAPC, –3.9%).

“In addition to placental abnormalities, risk factors such as preeclampsia with severe features, polyhydramnios, and uterine leiomyomas demonstrated the highest rates of increase in our data,” they wrote in their discussion. These trends may lead to continuing increases in postpartum hemorrhage risk, which was not fully explained by the increase in risk factors seen in the current study, the researchers said.

The study findings were limited by several factors, including the use of billing codes that could lead to misclassification of diagnoses, as well as possible differences in the definition and coding for postpartum hemorrhage among hospitals, the researchers noted. Other limitations were the exclusion of cases of readmission for postpartum hemorrhage and lack of clinical details involving use of medications or nonoperative interventions, they said.

The current study was strengthened by the use of a large database to analyze population trends, a contemporary study period, and the inclusion of meaningful outcomes such as peripartum hysterectomy, the researchers wrote.

The shift in blood transfusion and peripartum hysterectomy may reflect the implementation of protocols to promote early intervention and identification of postpartum hemorrhage, they concluded.

Interventions Can Have an Effect

“Hemorrhage remains a leading cause of maternal mortality in the United States and blood transfusion is the most common severe maternal morbidity,” Catherine M. Albright, MD, MS, associate professor of maternal-fetal medicine at the University of Washington, Seattle, said in an interview. “It is important to understand the current state, especially given that many hospitals have implemented policies and procedures to better identify and treat postpartum hemorrhage,” she said.

“Most of the risk factors that are listed in the article are not modifiable during that pregnancy,” said Albright. For example, a history of a prior cesarean or having a twin pregnancy is not something that can be changed, she said. “Many of the other risk factors or associated clinical factors, such as obesity, chronic hypertension, and pregestational diabetes, are modifiable, but before pregnancy. Universal and easy access to primary medical care prior to and between pregnancies may help to mitigate some of these factors,” she noted.

Looking ahead, “It would be helpful to ensure that these types of data are available at the state and hospital level; this will allow for local evaluation of programs that are in place to reduce postpartum hemorrhage risk and improve identification and treatment,” Albright said.

The study received no outside funding. Corbetta-Rastelli and Albright had no financial conflicts to disclose.