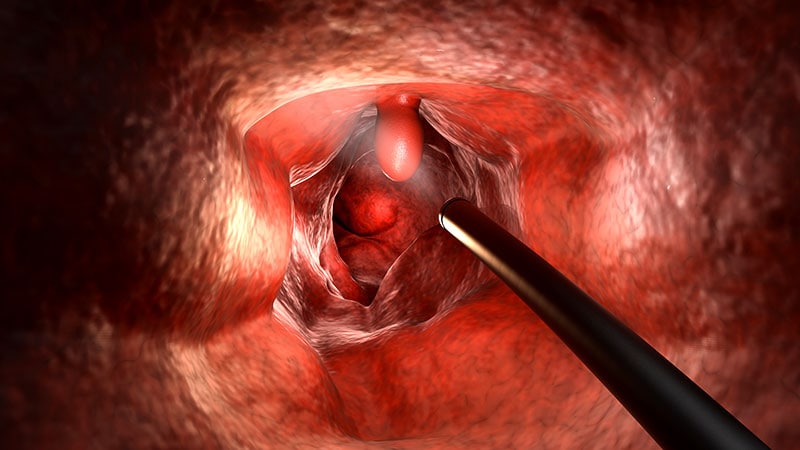 Directing people to either stool tests or colonoscopies based on their risk factors offers a viable alternative to screening for colorectal cancer, researchers say.

This risk-adapted approach catches more cancers than a stool test and is less expensive to the Chinese government than a colonoscopy, according to Hongda Chen, PhD, from Peking Union Medical College, Beijing, China, and colleagues.

“Notably, the risk-adapted approach saved approximately 33% of endoscopy resources required for detecting one advanced neoplasm compared to the one-time colonoscopy screening, which is relevant in restrained healthcare resource settings,” they write.

However, they found that the cost to society as a whole was lower for colonoscopy.

Chen and colleagues published their research online in Clinical Gastroenterology and Hepatology.

Many current guidelines call for a colonoscopy every 10 years or a stool test every year or every other year, with age used as the only risk factor in determining that decision, the researchers found.

But participation rates are not satisfactory, a lot of cancer goes undetected, and endoscopy resources are often strained.

As an alternative, Chen and colleagues wanted to investigate referring those patients with the most risk factors for colorectal cancer for colonoscopies and those with fewer risk factors for stool testing.

They recruited participants from the community in the cities of Taizhou, Lanxi, Changsha, Hefei, Xuzhou, and Kunming, China. They excluded those who had a prior history of colorectal cancer, prior screening within a “given time period,” and various other health conditions.

They randomly assigned 3833 people to colonoscopy, 7793 to stool testing, and 7697 to risk-adapted screening. The groups were similar except that the risk-adapted group had a slightly higher proportion of participants with a family history of colorectal cancer.

In the risk-adapted group, the researchers created a scoring system. Those aged 50-54 years got no points for age. Those aged 55-64 years got one point. And those aged 65-74 got two points. Men got one additional point, and women got none. A history of colorectal cancer among first-degree relatives was worth another point. Anyone who had ever smoked got one more point. A body mass index of 23 kg/m² or higher was another point. They added up the scores for each patient and referred anyone with at least 4 points for colonoscopy.

Participants in the stool-test and risk-adapted groups were invited for three rounds of screening. Anyone in these groups whose stool test was positive was referred for colonoscopy.

In the per-protocol analysis (which only included patients who complied with the recommended screening), detection rates for advanced neoplasm were 6.5% for colonoscopy, 2.18% for stool test, and 2.52% for the risk-adapted group. These differences were statistically significant (P < .001).

The results underscore what is already well known, that colonoscopy is the most accurate way of finding colorectal cancer.

In the intention-to-treat analysis (which included patients who declined the recommended screening as well as those who complied), detection rates for advanced neoplasm were 2.76% for the colonoscopy group, 2.17% for the stool test group, and 2.35% for the risk-adapted group. These differences were not statistically significant, suggesting that when the participants’ aversion to colonoscopies was taken into account, the three approaches were equally effective in finding cancer.

Different approaches may work for different patients because everyone has competing priorities and health issues, said Cassandra Fritz, MD, an assistant professor of medicine at Washington University School of Medicine in St. Louis, who was not involved in the study. Individual clinicians can take these into account.

“But when we’re thinking about populations as a whole, just screening as many people as possible is really what we need to focus on,” she told Medscape Medical News.

The economics of the screening approaches differed as well. The researchers estimated the cost to the Chinese government for detecting one advanced neoplasm at ¥6928 (US $1004) for colonoscopy, ¥5821 (US $844) for stool testing, and ¥6694 (US $970) for risk-adapted screening.

Taking a broader look, researchers analyzed the cost of detecting an advanced neoplasm from a “societal perspective,” which meant including such costs to participants as transportation and taking time off work as well as direct medical costs and overhead involved in managing a screening program. They came up with ¥15 392 (US $2231) for colonoscopy, ¥19 039 (US $2759) for stool testing, and ¥24 339 (US $3528) for risk-adapted screening.

“In future long-term evaluation, the lower impact on quality of life and higher adherence could make the risk-adapted screening more cost favorable,” they speculate.

Applying this cost analysis outside China would be difficult, Fritz said.

“It’s really important to keep in mind that we work in a different population in the United States than what was studied here,” she said.

Efforts are underway in the United States to make stool tests more widely available as a way of reducing healthcare disparities, she said. But risk-adapted screening makes sense.

“When we talk to our patients, we do all of these kinds of risk calculations in our heads,” she said. As more is learned about risk factors, that process is likely to become more standardized.

“I do think that that is where the field will likely go, and the question is how we incorporate genetic data into that,” Fritz added.

The study authors and Fritz have reported no relevant financial relationships.

Laird Harrison writes about science, health, and culture. His work has appeared in national magazines, in newspapers, on public radio, and on websites. He is at work on a novel about alternate realities in physics. Harrison teaches writing at the Writers Grotto. Visit him at www.lairdharrison.com or follow him on Twitter: @LairdH