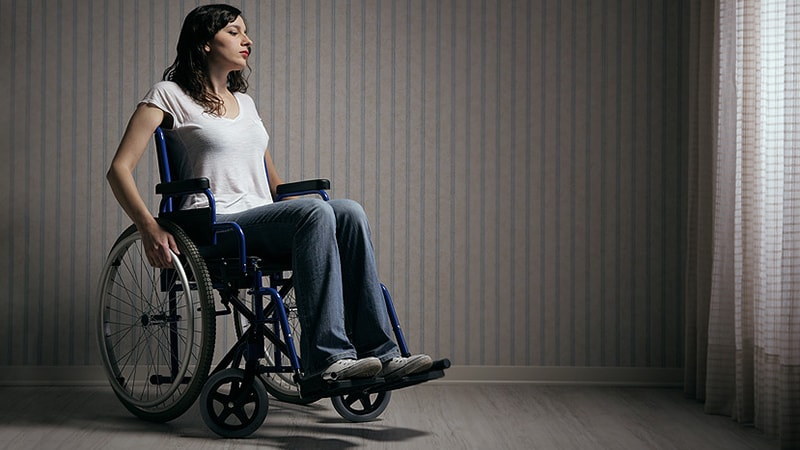 A young patient had used a wheelchair for many years because of paraplegia. During a video-monitored sleep study, however, she spontaneously flexed her thigh and stretched out her legs. After she watched the recording, her symptoms slowly began to improve. Now she can walk on her own again.

Raphaël Vollhardt, MSc, and his team of neurologists from the Pitié-Salpêtrière Hospital in Paris reported on the present case in JAMA Neurology.

The 30-year-old patient worked as an auxiliary nurse in an intensive care unit. She reported exercising regularly. Because she had severe asthma, she was also taking corticosteroids.

Because of urinary retention in conjunction with polyradicular neuropathic pain in the sacral region and discrete muscle weakness in both legs, she visited the hospital.

There, an MRI scan of the spinal cord was performed, which revealed T2 hyperintensity extending from the T12 segment to the lower end of the spinal cord (medullary cone) and the nerve roots in the cauda equina, with contrast medium uptake in the T1-weighted scan.

A cranial MRI scan was normal, but a polymerase chain reaction test detected herpes simplex virus 2 in the cerebrospinal fluid (CSF). The medical team diagnosed myeloradiculitis triggered by the virus (Elsberg syndrome). The patient received 800 mg of aciclovir intravenously every 8 hours for 2 weeks.

Despite this treatment, her symptoms did not improve: the urinary retention and neuropathic pain persisted. One month later, the symptoms worsened without a recognizable cause, and the young woman was almost completely paraplegic.

The results of the MRI scan of the head and spinal cord, the CSF analysis, the electroneuromyography, and the sensory and motor-evoked potentials revealed no pathological findings, however. Rehabilitation therapy did not elicit any improvement. The young woman eventually depended on a wheelchair.

Taking the extent of the symptoms into account, however, it was difficult to establish positive clinical signs of an FND. Some of the attending physicians were also skeptical of the FND diagnosis because of the initial myeloradiculitis, the clinical degree of severity, and the patient’s need to self-catheterize 8 times a day.

Three years later, Vollhardt and his team of specialists took another approach, which finally led to a breakthrough. The team offered to examine the young woman’s possible nocturnal movements on video at a sleep laboratory. During the video polysomnography, she spontaneously flexed her thigh and stretched out her legs shortly before waking up.

Electromyographic leads to the anterior tibialis and rectus femoris muscles verified strong muscle activity, which contradicted the lack of activity recorded before sleeping. These observations confirmed the FND diagnosis.

The team showed the patient the video clips and explained their significance. They told her that there were no signs of nerve damage and that she could move her legs.

She was advised to watch the recordings regularly to support potential motor rehabilitation. The technique was successful. Two months later, the young woman was able to move her right leg again and even, with human support, walk a few paces.

Approaches to examine an FND diagnosis using altered states of consciousness are not new, wrote Vollhardt. However, they used sedatives (eg, propofol) to demonstrate the reversibility of a motor deficit. But these methods have barely been pursued, presumably because of possible risks, said the author. The present case underlines the importance of reliable video sleep studies in the diagnosis and treatment of FND.

This article was translated from Coliquio.