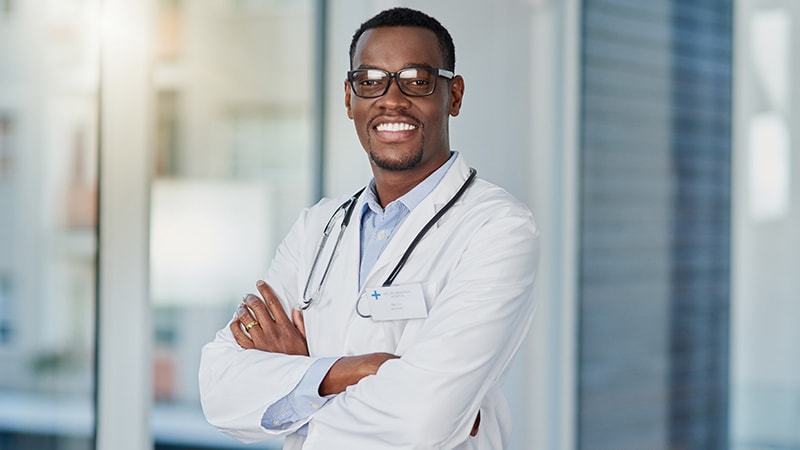 Good news can be hard to find, especially in this day and age. A positive story has the power to change perspective or brighten someone’s day. Sharing stories like these are a simple way to help take care of yourself and those around you. Here, we’ve rounded up five doctor-focused, feel-good stories that do just that.

At 6 months old, Madison Naylor was one of the youngest survivors of the 1995 Oklahoma City bombing. Her daycare center was just a few blocks away from where the Murrah building exploded in a firework of glass and tragedy, leaving 168 people dead.

Now, at the age of 27, Naylor has been accepted to a residency program for pediatric health at Oklahoma University Health. Although she does not remember the incident herself, she has heard stories all her life and says that being a survivor is part of her story.

“I think it’s one of the reasons why I was very idealistic and wanted to go into medicine in the first place,” Naylor told KOCO News. “In pediatrics, you really have the opportunity to step into a young person’s life and make a big impact on their health. No matter what, I just want to be a positive influence for people and I hope I can do that.”

It’s a familiar scene from television and movies: Passengers sit in too-small seats idly munching stale airplane pretzels, dozing off, and willing time to pass as quickly as possible. Suddenly, a flight attendant yells urgently over the intercom the words nobody wants to hear:

“Is there a doctor on the plane?”

For Kashif Chaudhry, MD, that moment became a reality when a fellow passenger went into cardiac arrest on a flight to Phoenix. Chaudry is the director of cardiac electrophysiology at the University of Pittsburgh Medical Center Williamsport in Pennsylvania and immediately jumped into action when the flight attendant announced a medical emergency.

Chaudhry and his wife, a fellow physician, immediately began performing CPR on the unresponsive woman. “The number one factor that determines whether someone is going to survive or not is how early they receive resuscitation,” Chaudhry told WNEP.

The passenger regained consciousness in about 90 seconds and is currently doing well. Chaudhry has taken this opportunity to advocate for everyone to learn CPR.

“This is something anyone can do, and you could potentially save a life. All you need to do is learn CPR,” Chaudhry told WNEP. “We can improve the statistics. We can improve survival by two to three times just by doing CPR early.”

Everyone loves an underdog story, especially when that underdog goes on to be an absolute triumph. In 2015, Kathy Nguyen was at brunch with her family when she suddenly slumped over onto her sister’s shoulder, unresponsive. She was rushed to the hospital where doctors discovered that she had suffered from a brain aneurysm.

Jonathan Russin, MD, a neurosurgeon at USC’s Keck School of Medicine in Los Angeles, embarked on a complicated and risky surgery to prevent another rupture in the future. The surgery was a success, and as Nguyen gained strength following her procedure, she said she wanted to run a marathon. In 2016, Nguyen completed the LA Marathon to celebrate her health. She even invited the USC Neuro Revascularization team to run the last few miles with her.

Russin, like Nguyen, believes in dreaming big and agreed to run the entire 26 miles with her. Since then, they have completed a triathlon in Arizona together, and on March 20, they ran their sixth LA Marathon together.

Everyone has a different strategy to try to ease patient anxiety. Scott Kahn, MD, a primary care practitioner in Clayton, North Carolina, likes to try magic tricks out on his patients. Kahn has enjoyed the art of illusion since he was a child and last month he took to the stage on Penn and Teller: Fool Us to see if he could dupe the famous magicians.

“I think now as I’m older, I really had a lot of success in mixing magic with practice in medicine,” Khan told ABC 11.

Penn and Teller: Fool Us is a competition show where amateur magicians try and dupe the legendary duo by completing magic tricks Penn and Teller were unable to do. Khan competed in the season finale on March 4, and though he wasn’t able to fool the experts, he’s grateful for the experience.

“It’s been a rough time for me and my colleagues,” Kahn admitted, referring to the stresses of the COVID-19 pandemic. “It’s fun for me to have this as an outlet to step away from things.”

The Latest Concert Venue? An OR

Whether you’re working out or just plain working, music can serve as a great motivator — even for plastic surgeon Joshua Lampert, MD, and his team at Lampert Plastic Surgery in Miami.

Lampert recently asked his musically inclined surgical tech Angel Cabrera if he would be open to performing live music on the operating room floor.

Lampert stressed the safety of this new practice to 7 News Miami. “The sterile field has to be maintained and one of the ways that we can is to ensure that it’s maintaining adequate distance from the field, and the fact that we have a surgical technologist that’s playing music, one of his number one jobs is to keep everything perfect.”

Cabrera, too, reiterated that he only plays music — including covers of Hotel California and We Are The World — when he’s not assisting the surgeon. And yes, he takes song requests.

“It all helps us move at a better pace,” Lambert said. “It all keeps morale up. It helps us perform better surgeries for our patients.”